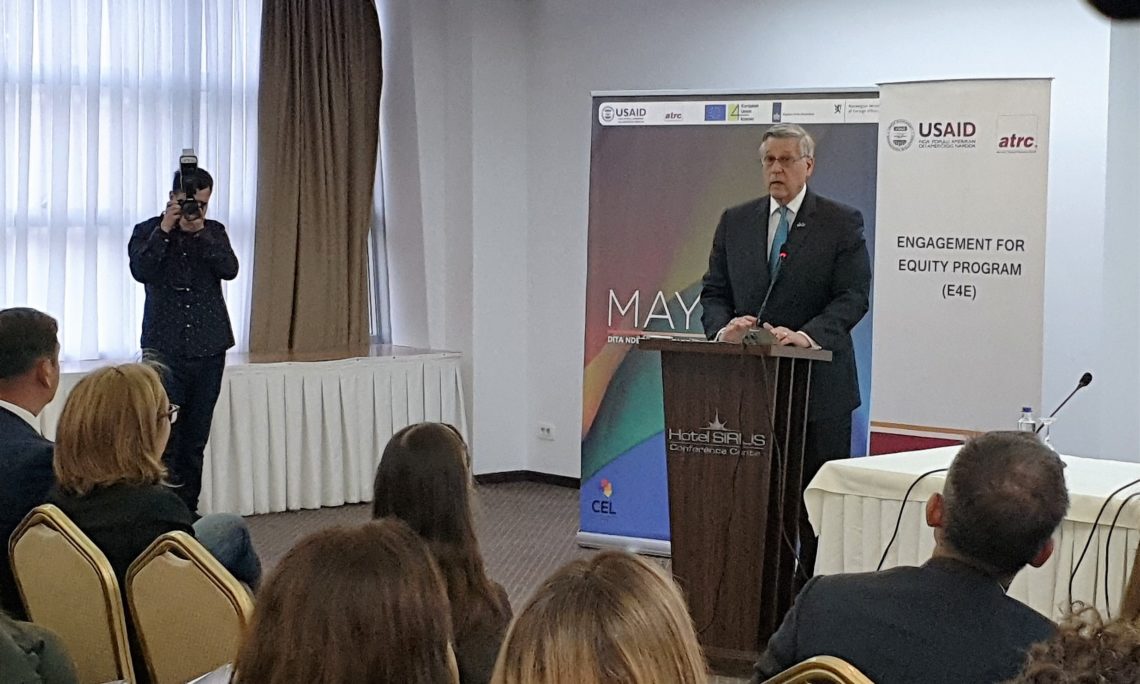 Thank you, Blert, for inviting me to speak on this important occasion.  And thank you to CSGD and CEL for working hard to bring LGBTI allies together through this conference.

Today, on the International Day against Homophobia, Transphobia, and Biphobia, we celebrate the global movement toward greater awareness and recognition of the rights of individuals from the lesbian, gay, bisexual, and transgender community.  We also join our voices to the call for greater dignity and equality for all persons, regardless of race, religion, sexual orientation, or gender identity.

As I’ve said in other contexts, the United States doesn’t have all the answers on how to build a more just, equal society – but our nation was founded on the proposition that all people are created equal and have the same inalienable rights to life, liberty, and the pursuit of happiness, and we continue to struggle to realize this promise of equality.

And similar rights – to life, liberty, and a sense of personal security; freedom of expression; the right to peaceful assembly and association – are now enshrined as well in the Universal Declaration of Human Rights.

To paraphrase the words of American President John F. Kennedy, the rights of every person are diminished when the rights of any one person are threatened.  Since President Kennedy spoke these words in 1963 in calling for action in support of civil rights for minority communities, the United States has made progress on many fronts, including the rights of LGBTI Americans.  I remember a time not many years ago when legal protections for these citizens seemed an extreme idea in my country.  But through decades of advocacy, legislative changes and societal shifts have made the United States a more welcoming place for the LGBTI community.

But throughout the world, the struggle for equality continues.  People from the LGBTI community are often prevented from exercising fundamental human rights.  And they continue to face violence, harassment, exclusion, and intimidation from fellow citizens, from government representatives, and even from members of their own families.

In Kosovo, despite a constitution that extends protections to all citizens, the LGBTI community is still struggling to assert its rights and gain wider acceptance.  This struggle seems to be paying off, however, as recent successes have shown—successes that signal a growing openness and acceptance of Kosovo’s LGBTI community.

Ensuring that the human rights of all Kosovo’s citizens, including LGBTI persons, are respected requires consistent and concrete action by the government, civil society, and individuals.   Let me offer a few examples of positive action in recent years:

While only a handful of people attended Kosovo’s first gay pride march in 2014, every year the crowds get bigger.  In 2018, the LGBTI community organized a pride parade with a reported 500 marchers.  The community received noteworthy support from the Kosovo Police, which played its part in ensuring the community’s right to peaceful assembly.  This is a clear sign of growing public support for the LGBTI community and perhaps a new-found freedom among many within the community to express themselves.

In terms of legal rights, recent amendments to Kosovo’s criminal code now provide a concrete framework for prosecuting criminal offenses targeting the LGBTI community.  Legal protection against hate crimes is a critical step in securing the right to life, liberty, and personal security.

The prosecutor’s office and law enforcement agencies are increasingly stepping up their efforts to ensure that community members enjoy the full protection of the law.  In September 2016, prosecutors in Ferizaj brought legal action against two individuals who allegedly attacked LGBTI persons.

But there is more work to be done.  While the government established the Advisory and Coordination Group within the Office of Good Governance to promote the human rights of all Kosovo’s citizens, including LGBTI persons, the advisory group has not done enough to compel ministries and other agencies to implement existing laws that protect the LGBTI community.

Civil society organizations in Kosovo are providing crucial advocacy and support services to the LGBTI community, but I encourage these organizations to collaborate for greater impact.  When you speak collectively, it is harder for others, including the government and media, to ignore what you’re saying.

The last point I would leave you with is that each individual citizen has a role to play in supporting the rights of your LGBTI neighbors, family members, and friends to live without fear of violence and discrimination.  A society is a reflection of its citizens’ values, and you have a chance to show the world that Kosovo is a place of acceptance and inclusion.  So I urge everyone across Kosovo to keep up the momentum demonstrated here today to make sure that the rights of Kosovo’s LGBTI citizens are respected every day.