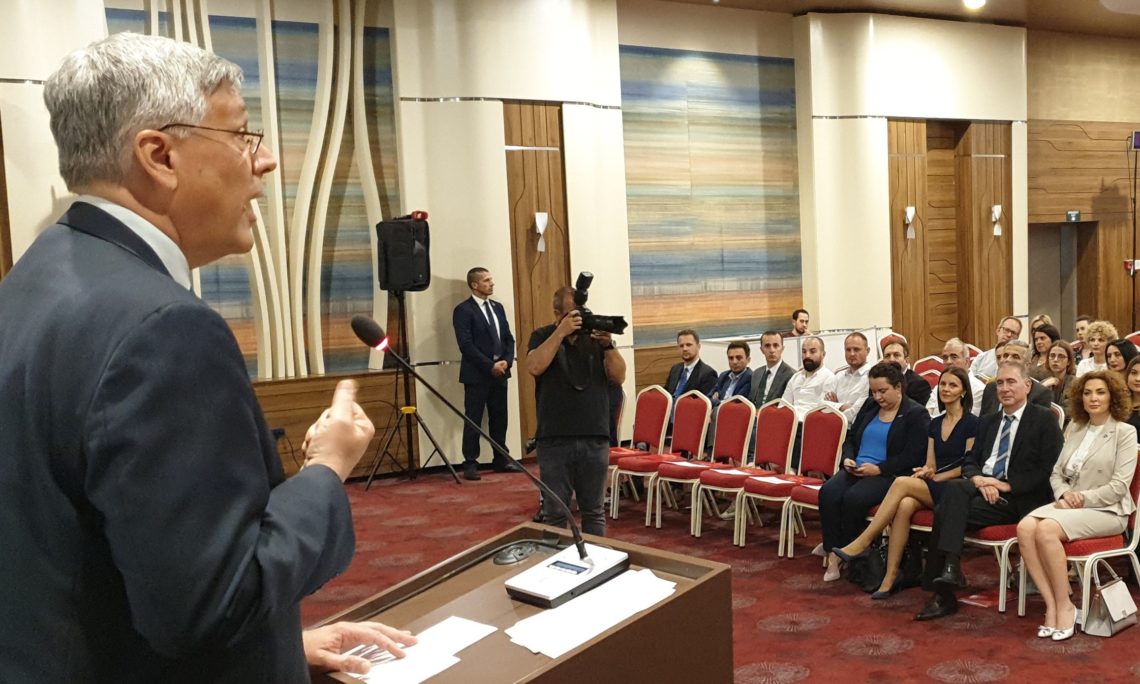 Good evening, everyone. It’s my pleasure to be here to celebrate the Transformational Leadership Program. TLP graduates have played, and will continue to play, key roles in advancing Kosovo’s prosperity—a core priority of the U.S. Mission and the focus of my remarks here today.

When I arrived in Kosovo last year, I was struck by the progress since my first tour here in 2003not just physical progress, like new roads and new IT infrastructure, but the achievements of a rising generation of educated, energetic citizens. TLP alumni exemplify Kosovo’s rising leaders. Thanks to TLP scholarships, nearly 300 Kosovo citizens have gone to the United States and come back with advanced degrees, going on to do extraordinary things. Just a couple of examples:

Liza Gashi, a graduate of Arizona State University with a TLP-funded master’s in public administration, founded Germin, an NGO that is leveraging the expertise of the diaspora to advance the development and diplomacy of Western Balkan countries.

Valmir Ismaili and other TLP grads founded Democracy Plus, a leading civil society group that focuses on good governance and rule of law.

TLP alumni also started VentureUP, an entrepreneurship center and venture incubator that is helping hundreds of students to turn their start-up dreams into reality.

TLP’s success also encompasses institutional, not just individual, initiatives. Through TLP, the University of Pristina and the Ministry of Education have established close partnerships with American universities, facilitated staff exchanges, and launched centers for research and career development to boost student and university resources. I look forward to Kosovo’s government taking the lead in sustaining these investments and partnerships in support of higher education.

Although I was invited here this evening to mark the end of the TLP Scholarships and Partnerships component, I’d prefer to see today as a celebration: a celebration of new beginnings as you all go forth to transform Kosovo’s potential into great ideas and real movement forward. You are role models for those who will follow. All the TLP graduates in the room please raise your hand. Now, give yourselves a round of applause. (applause, applause)

OK, now that I’ve inspired you, let’s talk about the challenges you will face in building Kosovo’s economic future – and how Kosovo can overcome those challenges.

Let me start by talking about what will not put Kosovo’s economy on a more positive track: magical thinking about foreign investment. When people ask me why more American companies don’t open factories in Kosovo because Kosovars love the United States – or why the U.S. Government doesn’t just order companies to open factories, I have to deliver the bad news. Americans who know Kosovo reciprocate the respect and affection Kosovo citizens feel toward the U.S. But business people have to invest where and when it makes business sense, period.

Over the past seven months, I’ve talked to economists and business leaders, to students and journalists, to better understand what’s needed to turn potential into prosperity in Kosovo. People repeatedly mention three keys to unlocking Kosovo’s potential.

First, accelerating private-sector development. Economists and entrepreneurs consistently underscore the need for a more business-friendly environment in Kosovo. When businesses thrive, they create jobs and wealth – and hope for the future. To thrive, businesses need predictability. To fuel growth, they need a reliable energy supply and access to capital.

They also need employees who have the right skills to succeed in the 21st century. The female manager of a thriving apparel company and a construction industry executive both told me the same thing. They told me about the mismatch between what youth are learning in school and the skills that businesses need. An IT business owner described the difficulty of finding well-rounded candidates with general knowledge and basic workplace skills.

This challenge is not unique to Kosovo. In the United States as well, employers complain about having too many law and business graduates, and not enough students prepared for careers as technicians and craftspeople. So it’s not only Kosovo.

To bridge this gap in Kosovo, the government must focus on providing opportunities for youth to develop the skills they need for the jobs of today and tomorrow. This means reforming the education system, and removing the influence of politics in the education sector. Public-private partnerships and linkages with foreign universities, similar to what TLP has done, could also help leverage resources, bring in new ideas, and spur innovation among Kosovo’s next generation.

A second broad requirement for prosperity is justice, specifically equal rights and opportunities, equal protection under the law, and public confidence that government officials will be held accountable to the people and to the law.

Equal justice is a big part of companies’ decisions on where to invest. They need to trust courts to resolve disputes fairly and quickly. They need to know they won’t be asked for bribes, and they need to trust the administrative processes and not seek special treatment based on whom they know. Can we honestly say that these conditions exist in Kosovo?

Justice means making it possible for more women to join the labor force and giving them the same chances for success as their male counterparts. It also means taking politics out of the hiring process. Brilliant people are leaving Kosovo because they can’t get a job if they don’t belong to the right political party or the right family, and many more are eyeing the exits.

Other countries have faced and overcome similar problems. Consider, for example, Estonia. After independence, Estonia moved quickly to completely reform its legal system, ensure new laws were implemented, and crack down on corruption. Estonia also updated its private property law and legal guarantees, among other changes, to attract investment.

As a result of these reforms—coupled with a long-term growth outlook and productive investments—Estonia is regularly ranked as one of the most transparent and least corrupt countries in the world. It also consistently scores high in economic freedom and ease of doing business—all of which are attractive conditions for foreign investors.

Kosovo is making some of the right initial moves, but more must be done. Kosovo has good laws, but they need to be consistently implemented. Women are making inroads in traditionally male-dominated fields, but still account for only 20 percent of the labor force, depriving the country of much-needed talent. Civil society organizations are successfully monitoring government actions, but should work together for greater impact. And government should treat civil society as partners in building a culture of transparency – not as adversaries to be fended off or ignored. And citizens must stay engaged and informed, and hold elected officials accountable for their actions.

Finally, I believe the third key requirement for Kosovo’s prosperity is peace. Peace among the communities within Kosovo, and peace with your neighbors. By “peace” I don’t just mean the sort of tenuous, tense ceasefire that exists today in this region. I’m fond of a quotation from the Dutch philosopher Baruch Spinoza:

“Peace is more than the absence of war. It is a virtue, a state of mind, a disposition for benevolence, confidence, justice.”

Globally, over the last 60 years, per capita growth has been three times higher in peaceful countries compared to more conflict-prone locations. Northern Ireland offers one example of how closely peace and prosperity are linked. In the early 1990s, Northern Ireland’s business community started speaking out on how the ongoing low-level conflict there was stifling investment and encouraging emigration. Putting forth the argument for a “peace dividend,” businesses urged the peace process forward, despite political turmoil and inertia.

In the wake of the August 1994 ceasefire, the idea of a “peace dividend” was vindicated: tourism rose by 20 percent, and unemployment dropped to its lowest level in 14 years. Over the next six months, businesses celebrated $48 million in new capital investments. Over the next decade, Northern Ireland outpaced regional employment growth and added 100,000 new jobs. Large-scale emigration slowed, and then reversed as individuals from other EU countries began arriving to share in the country’s newfound prosperity.

True peace could be transformative for Kosovo’s economy. Through reconciliation, Kosovo also has a chance to keep its greatest asset—its human capital—from seeking a future elsewhere.

I don’t want you leaving today thinking that I believe companies cannot succeed until we have perfect justice and perfect peace for Kosovo and its neighbors. There are indeed companies in Kosovo that have prospered – companies like Gjirafa in the IT sector and Solid Shoes in apparel, like the 3D printing innovator FORMON and the wood processor Elnor. They have succeeded despite Kosovo’s challenges, relying on hard work and innovation, not just foreign investment, to get where they are today.

So, ladies and gentlemen, the situation is not hopeless. As citizens, you can demand justice and open government, and you can work for the cause of peace. As business leaders, you can continue to strengthen Kosovo’s entrepreneurial culture. When I meet with young leaders like you, my faith in Kosovo’s future is only deepened. And the future starts now.