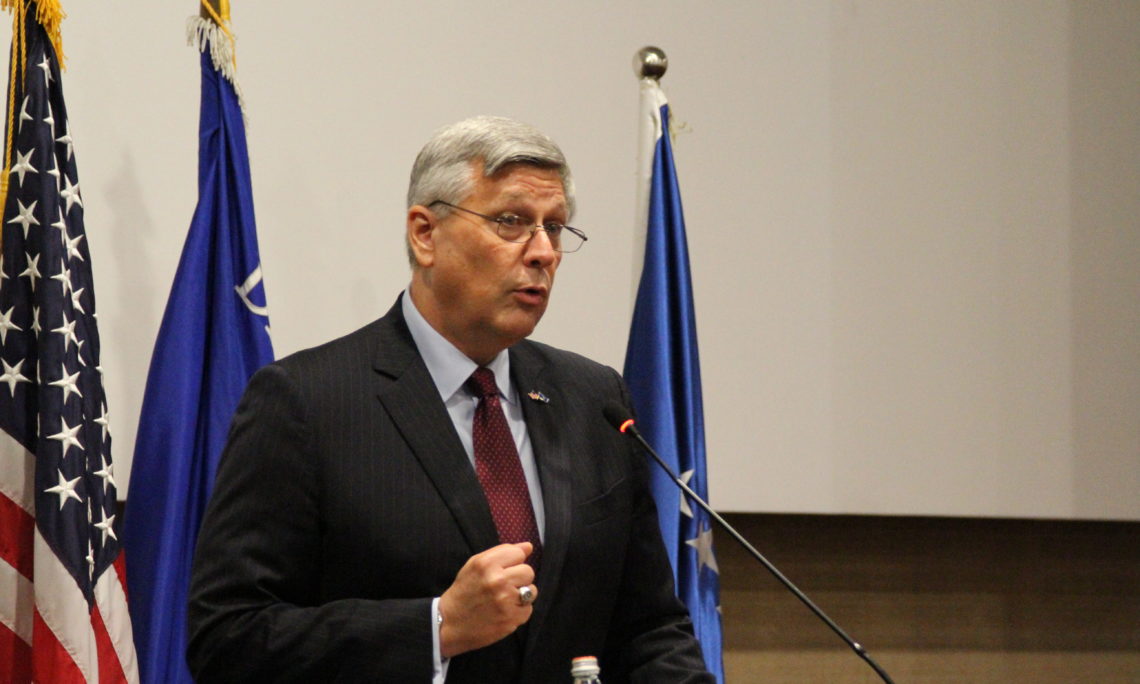 Good afternoon everyone.  It is a privilege and a pleasure to be here today, alongside friends and colleagues from Kosovo and the United States. The presence of officials from both the U.S. Department of Justice and the U.S. Department of State  is a demonstration of my government’s enduring commitment to the development of Kosovo’s law enforcement and judicial institutions.

Let me begin by adding my voice to the many offering congratulations to today’s graduates. Northwestern University’s ten-week School of Police Staff and Command program is among the best law enforcement leadership and management programs offered in the United States.  Many SPSC graduates are currently serving in top positions in leadership in law enforcement agencies in the United States as well as in Kosovo.  Your qualifications for this course means you have already demonstrated your readiness for more senior responsibilities, and you will soon be putting your experience and training to work at the next level of leadership.  And leadership is the focus of my remarks today.

Now, thousands of books have been written on leadership, and we could talk all day about different perspectives on the topic.  I’m going to focus on three specific aspects of leadership I think are vital to any organization: vision, teamwork, and integrity.

Let’s start with vision.  In my view, having a long-term vision of what your organization should accomplish is the key difference between being a leader and being a manager.  Managers are important; don’t misunderstand me.  A manager knows how to get people to accomplish tasks to work toward goals. A leader knows how to work with others – peers, subordinates, superiors, as well as people outside the organization – to determine what those goals should be.  A leader knows how to inspire others toward those goals.

Here’s a famous example: in 1961 President John Kennedy challenged the United States – the government, the Congress, the business community, and the American people – to send a man to the moon within eight years.  It seemed impossible – but Kennedy later said:

“We choose to go to the Moon in this decade not because it is easy, but because it is hard…because that goal will serve to organize and measure the best of our energies and skills, because that challenge is one that we are willing to accept, one we are unwilling to postpone, and one we intend to win.”  That is vision.

But no individual – not even one as charismatic and visionary as John Kennedy – can execute vision alone.  It takes a team to make a vision reality.  In the words of top American business leader, Oracle CEO Mark Hurd, “Without execution, ‘vision’ is just another word for ‘hallucination.”   And to execute, you need teamwork.

As police, you all know a lot about teamwork already.  You work in jobs where you rely on your partners to have your back just as you have theirs.   But let’s talk about what teamwork looks like at a larger organizational level.   Here I will offer a quotation from an American military leader of the 1970s, Lieutenant General Walter Ulmer.  It’s a very long quotation, but I’m going to read it because it is the best summary I know of how to recognize a unit that operates well as a team under pressure.  Ulmer was writing about the Army, but the same analysis could apply to any large organization:

“What is the essence of a ‘good climate’ that promotes esprit and gives birth to ‘high-performing units’?  It is probably easier to feel or sense than to describe. It doesn’t take long for most experienced people to take its measure. There is a pervasive sense of mission. There is a common agreement on what are the top priorities. There are clear standards. Competence is prized and appreciated. There is a willingness to share information. There is a sense of fair play. There is joy in teamwork. There are quick and convenient ways to attack nonsense and fix aberrations in the system. There is a sure sense of rationality and trust. The key to the climate is leadership in general and senior leadership in particular.

OK, I hope you memorized that.  I come back to General Ulmer’s definition every time I join a new organization – especially when I have the opportunity, as you will in your future assignments, to shape its culture.

One last thought on teamwork. The first time I was promoted into a leadership position, I told a friend – an experienced leader – that I intended to be a hard charger, driving my team to accomplish every mission.  He listened to me for awhile, and then he said, “Phil – here’s what I’ve learned.  If you take care of your people, your people will take care of the mission for you.”   That was good advice.  And I’ve also learned that people will only give you their best effort if they respect you… and that brings us to the question of integrity.

Since the first day of your training with the Kosovo Police, you’ve been reminded of the importance of personal integrity. It is no secret that corruption is a huge problem in Kosovo’s institutions, and as leaders in the police you will be challenged to resist and counter corruption on many levels. As senior leaders, you must model honesty and integrity every day.  Your fellow officers are watching – and so are your fellow citizens.

Fighting corruption is difficult, sometimes dangerous work, but success is achievable.  Let me tell you the story of the New York Police Department in the 1960s and ‘70s, and a real-life police detective named Frank Serpico, whose story was later the subject of a famous book and movie.

In the New York Police Department, the NYPD, fifty years ago, petty corruption is a way of life.  As a new patrolman, Serpico is introduced to low level corruption – things like accepting free food from restaurants in return for letting their delivery trucks park illegally.  No serious harm, right?

As Serpico moves up in the ranks and becomes a detective, he is exposed to higher levels of corruption among his partners, like accepting bribes from drug dealers to look the other way.  He refuses to participate and becomes an outcast. Serpico does the unthinkable – he breaks “the blue wall of silence” to report on corruption to investigators outside the police. His partners retaliate by setting him up to be shot by drug dealers.  Serpico survives the shooting and continues to testify.

Serpico’s actions had a decisive effect in breaking the culture of corruption in the NYPD.  Michael Knapp, former chairman of New York’s Commission to Combat Police Corruption, observed in 2012 that “the attitude throughout the Department seems fundamentally hostile to the kind of systemized graft that had been a way of life almost 40 years ago.”

Here is what Frank Serpico had to say in his later years: “The fight for justice against corruption is never easy. It never has been and never will be. It exacts a toll on ourselves, our families, our friends, and especially our children. In the end, I believe, as in my case, the price we pay is well worth holding on to our dignity.”

Ladies and gentlemen, thank you for your attention.  May God protect you in service to your country.