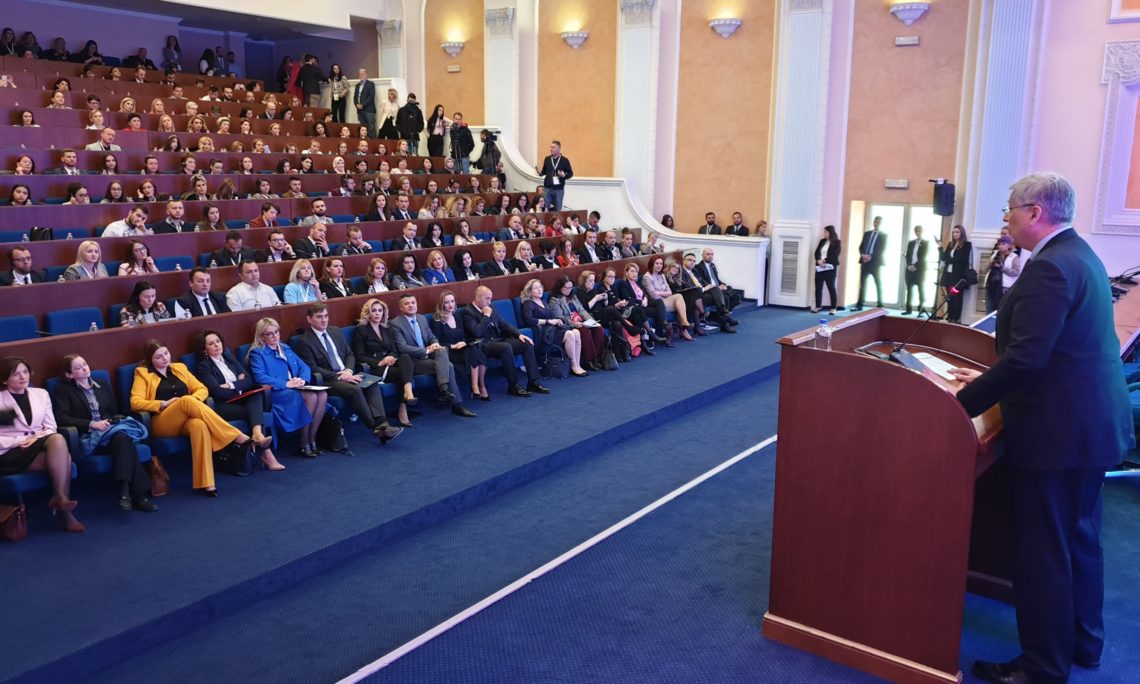 Ambassador Kosnett’s Remarks at the Launch of Week of Women, March 26, 2019

Prime Minister, Judge Dobruna, ladies and gentlemen, ministers, good morning.  I’m honored to be here to participate in Kosovo’s Week of Women.  I’d particularly like to thank Pranvera, Alex, and the rest of the NDI team for supporting this forum, which gives citizens an opportunity to develop concrete solutions that tap into the strength of Kosovo’s citizens for greater inclusion and integrity.

I know what some of you are thinking: why is a man giving the keynote speech at a women’s empowerment conference?  And I have to agree that it might appear cliché and even ironic.  But men should be allies in women’s struggles, and this is not a new idea.  The 20th century American activist and writer Gloria Steinem defined a feminist as “anyone who recognizes the equality and full humanity of women and men.” And I must say that if I ever were to forget that, my wife Alison, who is my senior policy advisor as well as my life partner, would remind me immediately.

I’m heartened to see men in the audience who are here at Week of Women and committed to supporting empowerment of women.  Because the goal of advancing full equality and empowerment for women is not only “women’s work.” It is the responsibility of all people, regardless of gender, in the same way that seeking racial justice or religious freedom is everyone’s responsibility.

And there are positive examples here in Kosovo.  For example, take young Besnik Leka.  Growing up in a small town in eastern Kosovo, Besnik saw how he was treated better than his sisters simply because he was a boy.  This inspired Besnik to take action.  He joined the Young Men Initiative, and today is working to turn men into allies and advocates through workshops on preventing gender-based violence and promoting gender equality.

In Besnik’s words, “We must understand that gender equality is not about ticking a box.  It is about undertaking serious measures to end this exclusion.”

This would be a good point for me to address something many of you are doubtless thinking – is America such a paradise for women that I have a right to lecture the people and leaders of Kosovo?   Let’s be honest, America is still struggling for equality for women even after two centuries of freedom.  We now have more women than ever in Congress, but the number of female representatives in Congress, on Capitol Hill, is still less than 24%. And female executives are no longer a rarity, but only 5% of Fortune 500 companies, the top companies, have women in their very senior leadership positions.

But while Americans don’t have all the answers—at facing the hard truths about our society.  So let’s not let the fact that Kosovo is not the only country facing these issues become an excuse for lack of action here in Kosovo.

The question of equality for women is such a big, sprawling topic that we need themes to guide discussion.  At this year’s Week of Women, you’ll be tackling the topic of integrity in local government processes.  This topic fits well with the desire of the people of Kosovo, which is now in its second decade of independence, to fulfill the promise of representative democracy—one in which every citizen has a voice and every citizen has a stake in the nation’s future.

What do I mean by “integrity in political processes?”  When they hear the word “integrity,” people usually think of honesty.  And that is true, and critical to political life in a democracy.  But there’s a second, meaning to integrity: to be whole, to be undivided, to be complete

Today, Kosovo is not whole. It is, in fact, divided because 50 percent of its population is consistently held back politically, economically, and socially.  There’s a saying in America that “if you don’t have a seat at the table, you’re probably on the menu.”

And if you don’t think that’s a big problem for Kosovo’s  future prospects, you haven’t been paying attention.   Because when women are at the table – part of the decision-making process – the results are positive for the whole country.  A broad body of data shows, throughout the world, that women’s  economic empowerment enhances a country’s productivity, improves income equality, and boosts GDP.   Studies show that when women serve in government, public health budgets go up and governments are less corrupt.

The inclusion of women is something the people of Kosovo must decide for themselves they will change.  And change is possible.

Despite institutional and cultural challenges, women in Kosovo are doing great things.  More women every year are enrolling in universities.  President Jahjaga, Majlinda Kelmendi, and Era Istrefi are examples of leading figures in human rights activism, sports, and entertainment, and serve as role models for girls across Kosovo.

Women in Kosovo are also breaking into traditionally male-dominated fields.  Let’s talk about one initiative, that I’m particularly impressed by,  at a government institution, the Kosovo Police.  Thanks to a concerted push by the police to encourage gender balance in its ranks, women are joining the Kosovo Police in unprecedented numbers.  Since 2016, the percentage of female cadets at the police academy has jumped from 3 percent to 30 percent.  This is outstanding and heralds a significant cultural shift.  So Prime Minister, I challenge you—let’s see the rest of the government catch up to this performance.

I’m going to stop talking in a minute, because it is time for you to start talking about these issues and how you can deepen your involvement.  I look forward to hearing your conclusions about actions Kosovo’s government can take, how civil society can be more effective, and what every individual citizens can do to address this issue.

But before I go, let me leave you with the words of Susan B. Anthony, the 19th Century activist who led the fight to give American women the right to vote. Susan B. Anthony said: “There shall never be another season of silence until women have the same rights men have on this green earth.”