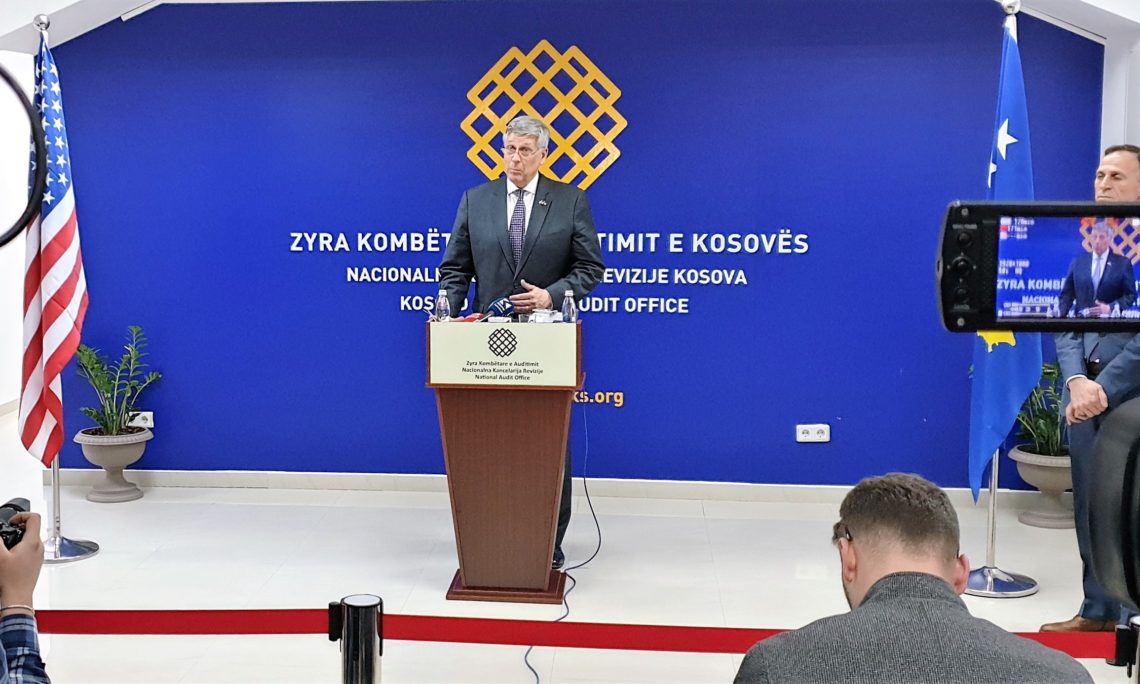 While the words audit and delighted may not often appear in the same sentence, I must say I am delighted to be here today to mark the official launch of the Anti-Fraud Unit of the Kosovo National Audit Office.   I am delighted because this unit is a living example of how justice and prosperity are linked—how an effective system of checks on government sets the groundwork for the effective use of Kosovo’s resources to build a foundation for greater prosperity and peace.

I’d like to begin by acknowledging the Audit Office’s achievements in faithfully executing financial and performance audits, as authorized by the constitution.  Let me give you one example: In 2016, the Audit Office discovered that the Municipality of Leposavic and the Treasury had both paid—they had paid twice—for the same road renovation work.  The Treasury Department, to its credit, corrected the mistake, and recovered 86,000 euros from the contractor.

Despite this and other successes, many Kosovo institutions are simply not doing their part by acting on the findings of the Audit Office. I am sorry to say that only one-third of the recommendations have been addressed in recent years.  The problem is that the constitution gives this office the right to audit government agencies, but there are no penalties if those agencies fail to recognize the findings. Even Kosovo’s Assembly, which provides oversight for the Audit Office and is the main user of its reports, is complicit in this negligence.

With the establishment of the Anti-Fraud Unit, the Audit Office is sending a message that it will not back down—rather, it is stepping up its efforts to expose corruption and fraud.  In fact, even though today is the official opening of the Unit, it has been active for months, and has already scored some successes.  Up until now, the Unit has uncovered 38 potential cases of fraud based on audits from the year 2017.  This is a promising start at a time when Kosovo’s citizens need their institutions to prove that they have nothing to hide from the people.

For the people of Kosovo deserve leaders and institutions that fully embrace accountability and transparency.  My government—the United States government—by providing technical assistance and bringing together stakeholders, has been a proud supporter of the Audit Office’s mission.  But now, at the start of Kosovo’s second decade of independence, it is time for Kosovo’s leaders and Kosovo’s institutions to take the lead and to take the responsibility to enforce the law.

So I call on the Kosovo Police and the Prosecutor’s Office to provide the Audit Office with vital law enforcement assistance.

And I call on citizens and civil society to stay engaged in these issues to ensure that corruption has no place to hide and leaders are held to the highest standards.

But most of all, I call on Kosovo’s senior officials to ensure that the institutions obey and enforce the law, and do their part to create a culture where corruption and cronyism are a thing of the past.

I will close with the words of the American President Theodore Roosevelt who said, “No man who is corrupt, no man who condones corruption in others, can possibly do his duty by the community.”