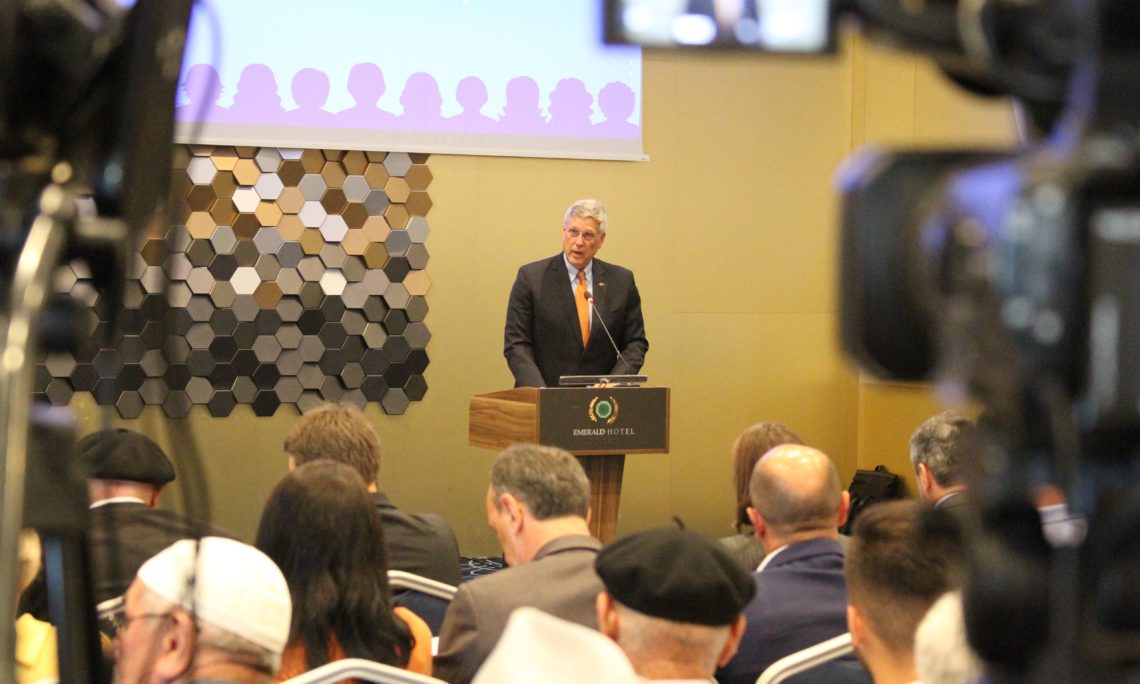 Thank you, Mr. Qerkinaj and Mr. Trifunovic, Missing Persons Resource Center, Mr. Lluka, Mr. Gjetaj, ladies and gentlemen, and most importantly the families of the missing.  I am grateful for the opportunity to join you on this day of remembrance, to show respect for the remaining 1,653 missing persons from the Kosovo conflict, of all ethnic communities, whose fates remain unknown two decades later.

This year marked the twentieth anniversary of many of the most horrific incidents that occurred in Kosovo.  It is a painful anniversary and I have had the solemn honor to participate in several remembrance ceremonies. My wife Alison and I have listened to stories of suffering, courage, and compassion from all corners of Kosovo and all its communities. It is impossible to hear these stories and not come away with a renewed dedication to support the survivors and families in the struggle for justice.  There are successes to point to, as others have mentioned. I’m encouraged to see Kosovo participating in the International Committee of the Red Cross bilateral working group that closed 70% of missing persons cases countrywide and is making progress again after several slow years.  And the inter-ethnic work undertaken by the Missing Persons Resource Center is unique in uniting victims of all ethnicities.  I hope more organizations will follow their lead. By modeling inter-ethnic cooperation, including across borders, NGOs and civil society organizations can set the example for regional governments to follow.

But there is so very much more to be done, as survivors age and memories fade.  This should be one reason of many for Kosovo and Serbia to accelerate progress towards resuming talks on establishing normal relations.   And with elections coming up in both countries, I encourage parties and candidates to take the opportunity to outline for voters what steps they plan to bring missing persons cases to a close.  To seek justice for the victims of the past is to build a foundation for peace in the future. As the South African leader Desmond Tutu said – “if you want peace, you don’t talk to your friends.  You talk to your enemies.”

But in highlighting the role of the NGOs and the responsibility of governments – including my own government, the American government – to do more, I submit that it is the people in this room – as free citizens in a democracy, and as survivors who know what it means to be targeted and to suffer violence on the basis of ethnicity and language – it is the people in this room who can play a vital role in pressing forward toward the goal of justice.  With the greatest respect, I ask that you raise your voices on behalf of those from all communities who have lost loved ones.  Continue to reach out to others who share your sorrow, and advocate for a truly inclusive Kosovo where all citizens can build a future.

Ladies and gentlemen, the battle of compassion over indifference, of truth over lies, and of love over hatred, is a battle we can win.  In the words of the great American writer and activist, Toni Morrison, who left us too soon just this month, “The presence of evil was something to be first recognized, then dealt with, survived, outwitted, triumphed over.”  Thank you very much.