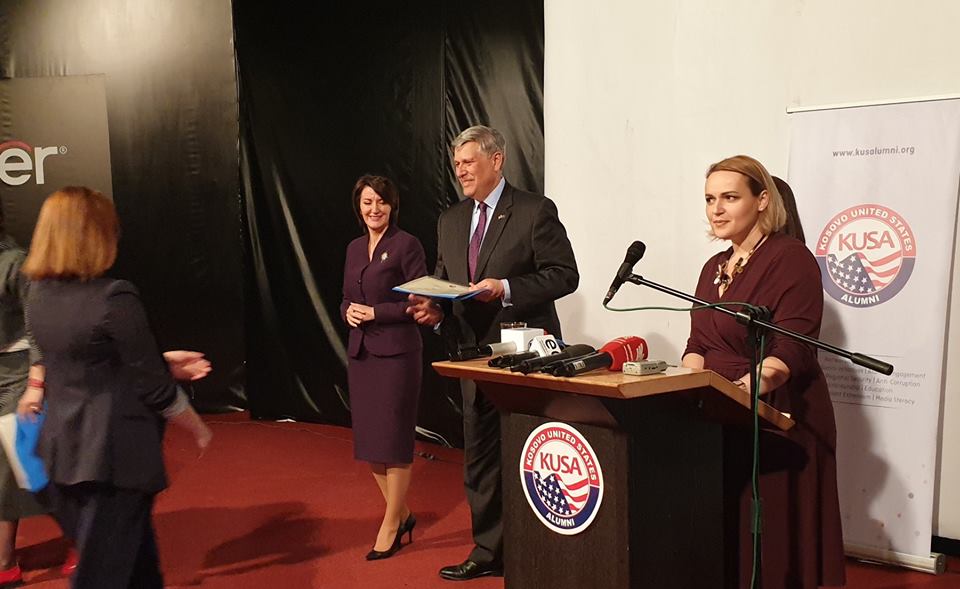 Ambassador Kosnett’s Remarks at the “Acknowledge My CV” Event,  March 18, 2019

It is an honor to be here today to celebrate the women who completed the “removing barriers for equal opportunities” certification program in the presence of so many distinguished men and women.

Kosovo succeeds when women lead.  All of you who have completed this program have the knowledge and skills to lead.  We know you already had those abilities and you don’t need to receive a certificate to hang on the wall to prove it – but I hope the program helped you to build your network, sharpen your skills, and to consider your next steps. Shkendije and the rest of the trainers have given you tools you need to succeed in leadership positions.

You will not be Kosovo’s first female leaders, of course.  Women already hold important positions in the Kosovo Police, in education, in journalism, and at the Assembly.  Kosovo’s women have had remarkable international success in music and sports.  And they are making inroads in traditionally male-dominated fields like technology.

One such wonderful role model of strong female leadership is right here in the room. I must take a moment to praise President Jahjaga.  President Jahjaga campaigned successfully for Kosovo’s recognition on the world stage. Now she is a leader in the effort to ensure the rights of survivors of wartime sexual violence.   It is a privilege to work with this courageous woman.

Shkendije also gave me an opportunity, an opening, to talk about my wife, Alison Kosnett. Alison is my closest, most trusted advisor, not only on women’s issues, but on all issues. Watching the challenges that my wife, and my daughter who is also a professional, have faced in the world, has helped me to understand the importance of working together to ensure empowerment for all women in all countries.

Individual stories are inspiring.  But as every woman here knows the fight for gender equality in Kosovo is not over. The men also know that, if they are paying attention.

With only 18% of its women in the workforce, Kosovo has one of the lowest rates of female workforce participation in the world.  A country cannot succeed with half of its brainpower on the sidelines.

This isn’t just a challenge in Kosovo.  In the United States, too, we have plenty of work to do.  We now have more women than ever sitting in Congress.  But the number of female representatives on Capitol Hill is still less than 24%.  And female executives are no longer a rarity, but only 5% of Fortune 500 companies have women at the very top.

So I encourage you to do what women in America are increasingly doing – seize the day!  To quote one of the most successful women in America’s entertainment industry, Beyonce, “Power is not given to you.  You have to take it.”

The men around you are not waiting until they think they are perfectly ready to apply for a supervisory position, or to move to a new company with greater responsibilities.  There is data on this: Hewlett Packard, one of America’s leading IT companies has done research that shows that women typically wait until they have 100% of the qualifications on paper before they apply for a new position; men jump in and apply for a position when they only have 60% of the qualifications.

The CEO of another American tech giant, Yahoo, Marissa Meyer, said “I always did something I was a little bit not ready to do.  That’s how you grow.”

I realize that it is easy for me to stand up here, speaking from a position of male privilege, and urge you to aim high.  People like me owe you more than speeches.  People who are already in leadership positions have a special responsibility to help the next generation and to reach down the ladder to offer opportunities and mentoring to individuals working their way up.

That includes men.  Both in the United States and in Kosovo men have traditionally held the most of the power in government and in business.  If society is to prosper, men must learn not to treat women’s empowerment as a threat, or to see gender equality as a “women’s issue” alone.

In Kosovo, that imperative intersects with the push to stop leaders – whether on corporate boards or in government agencies – from appointing individuals on the basis of political affiliation or personal friendship, rather than merit.  Those traditions disadvantage women but they also hold back the country as a whole.

I am confident Kosovo will continue to progress toward equality for all its citizens.  I look forward to seeing you – the graduates of this certification program – sitting across the table from me, representing your organizations.

“Power is not given to you.  You have to take it.”