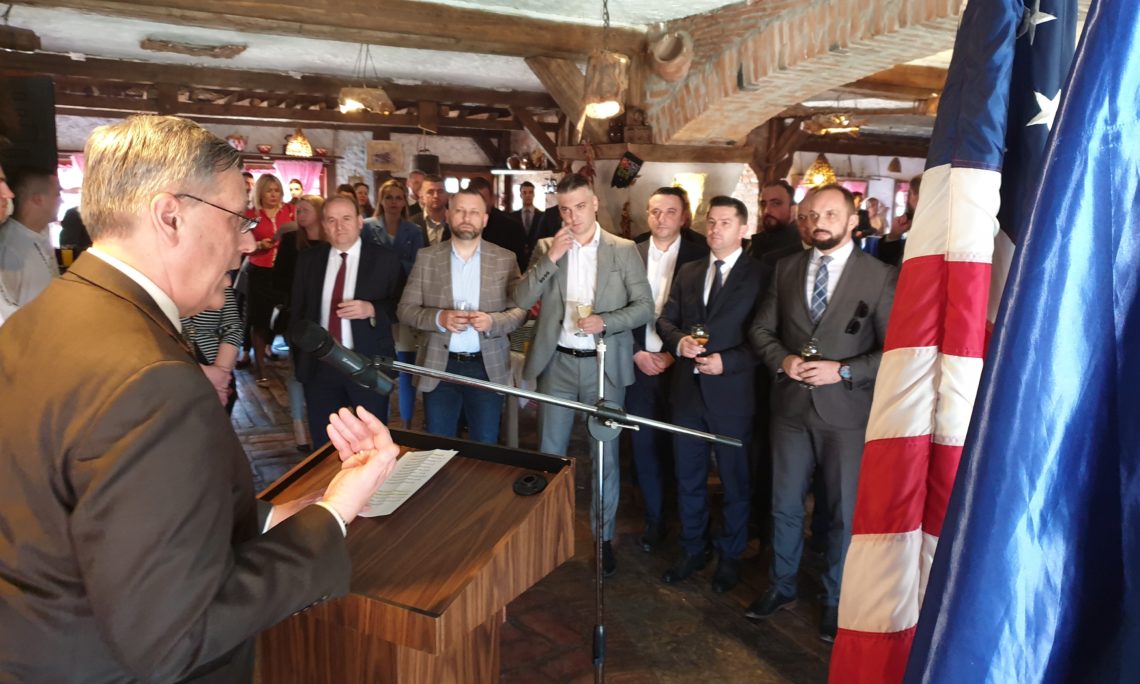 I invited you all here because I want to meet you and hear about your successes as well as the challenges you’re facing, and where you think we might be able to work together to promote peace, justice, and prosperity in Kosovo.

Today’s gathering is not a bureaucratic exercise for my Embassy where we say, “ok, we’ve met with the Serb community; we’re finished for the year.”  I see this as the beginning of a conversation and look forward to spending more time with the members of this community.   I’ve also spent some time in the North and will travel again soon, and look forward to meeting more members of communities there.

Visiting Gracanica is meaningful for me, as it was one of the first towns I visited back in 2003, when I first served at the U.S. mission in Kosovo.  I never forgot the beauty of the monastery and the church.

When I returned a few months ago as Ambassador, this time with my wife Alison, Gracanica was again among the first places we visited.  We appreciated the warm welcome we received from the community on Christmas Eve.  We expected to be inspired by the church service, and we were.  But we had no idea how much fun we would have visiting around the fire drinking hot rakija!

At the Embassy, we describe our goals for Kosovo as supporting efforts to build peace, justice, and prosperity for Kosovo and the region.    I don’t think you can hope for progress in one of these areas without working for progress in the others.  We are convinced, for example, that economic progress depends in part on fighting corruption and improving trust in the court system.  But economic progress – prosperity – also depends on building peaceful relations, both between Kosovo and Serbia and within this country.

With regard to Kosovo and Serbia, my government has spent a lot of energy lately trying to convince Kosovo leaders to suspend the tariffs on Serbian goods and on trying to convince both Kosovo and Serbia to return to the Dialogue.  I know the process has caused anxieties about the future, but we believe the time is right to reach a comprehensive agreement and to finally normalize the relationship between the two countries.

I hope the two sides will return to the table soon.  However, as you are vividly aware, true peace for Kosovo is about more than just normalizing relations between countries.  It also means improving the relationship between communities and between Kosovo Serbs and the Kosovo government.

I often talk about that Christmas Eve service, along with the Catholic Christmas Eve service my wife and I attended earlier at the Cathedral, as examples of the richness of experience living in a multi-cultural, ethnically diverse society brings.   What a gift that Kosovo can simultaneously be home to treasures like this frescoed living monument, like the ancient ruins of Ulpiana, and like the castle in Prizren that demonstrates religious and ethnic coexisting over centuries.   How barren Kosovo would be without its mosaic of Albanian, Serb, Bosniak, Turk, Roma, Ashkali, Egyptian,Jewish and Croatian communities.

Embracing diversity requires commitments by all of us – to be intentional about inclusiveness, to be open to perspectives that challenge our assumptions, and to become comfortable with complexity.

Well-meaning foreigners sometimes show up in a country troubled by the legacy of conflict and say, “You should forget the past and just move on.  Look toward the future!”  Well, I don’t think that approach is realistic.   We can’t forget our past, and we shouldn’t.  But we also must not allow the past to take the future hostage.

Earlier this week, we commemorated the 20th anniversary of NATO’s Operation Allied Force.  We didn’t send Americans to fight and die for a Greater Albania or a Greater Serbia, or to target the people of any community.  We intervened to halt an ongoing humanitarian catastrophe and protect civilians.  I acknowledge that the losses from this period still make many hearts heavy with pain.   We hope to see this anniversary not as an opportunity for people to stir up old hatreds, but to study the past to help us learn lessons that will prevent a recurrence.

That is true in my country, as well.  I am proud of the cultural, ethnic, and religious diversity of the United States.  But building equality doesn’t come easily.  The United States is 240 years old, and we still struggle to build a society with equal opportunity and equal justice for all.   Americans don’t have all the answers, but Americans are getting better at asking questions about the darker moments in our history.

Last year before coming to Kosovo, Alison and I had a chance to visit the Museum of African-American History and Culture in Washington and the National Memorial for Peace and Justice in the state of Alabama.   Both tell the story of how, for a century after our Civil War, local power structures used murder, rape, and arson as political weapons to suppress the rights of minority groups.

It’s difficult to accept that dark deeds were perpetrated by members of your own community.  But it is our duty to our neighbors, ourselves, and our children to try to view history from another group’s perspective.

And my dream for Kosovo is that we move beyond the concept of tolerance – of grudging acceptance of the right of people from different communities to live here.  Instead, I hope to see people actively welcome and embrace neighbors from other communities and religions. For the future of Kosovo Serbs is in Kosovo.

That’s why you’ll hear me push Kosovo leadership to make serious progress on language rights, to implement pending court decisions on the property of the Serbian Orthodox Church and individuals, and to take the security of all communities seriously.

Our Embassy will continue to push for more Kosovo-Serb notaries and to look for ways to improve access to markets for Kosovo-Serb entrepreneurs, make courts functional for all citizens, and help Kosovo-Serbs have a stronger voice in their community.

But you cannot rely solely on foreigners and the majority community to ensure these rights are respected.  All of you – whether you work in the private sector, civil society, media, or politics – have a role to play.

I encourage you to use every democratic tool available to pursue the interests of your community and demand a better future for yourselves and for your children.  Build relationships with your neighbors.  While demanding your language rights are respected, encourage your kids to participate in interethnic programs and learn the languages of their neighbors.  Oppose the withdrawal of Serbs from institutions, which silences your community.  Avoid incendiary rhetoric, which heightens tensions between communities without achieving results.

And above all, let us stand up to those in all communities who would use violence and intimidation to seek to break the bonds among Kosovo’s citizens.  For, as has been said by many a philosopher, “All that is necessary for evil to triumph is for good men to do nothing.”