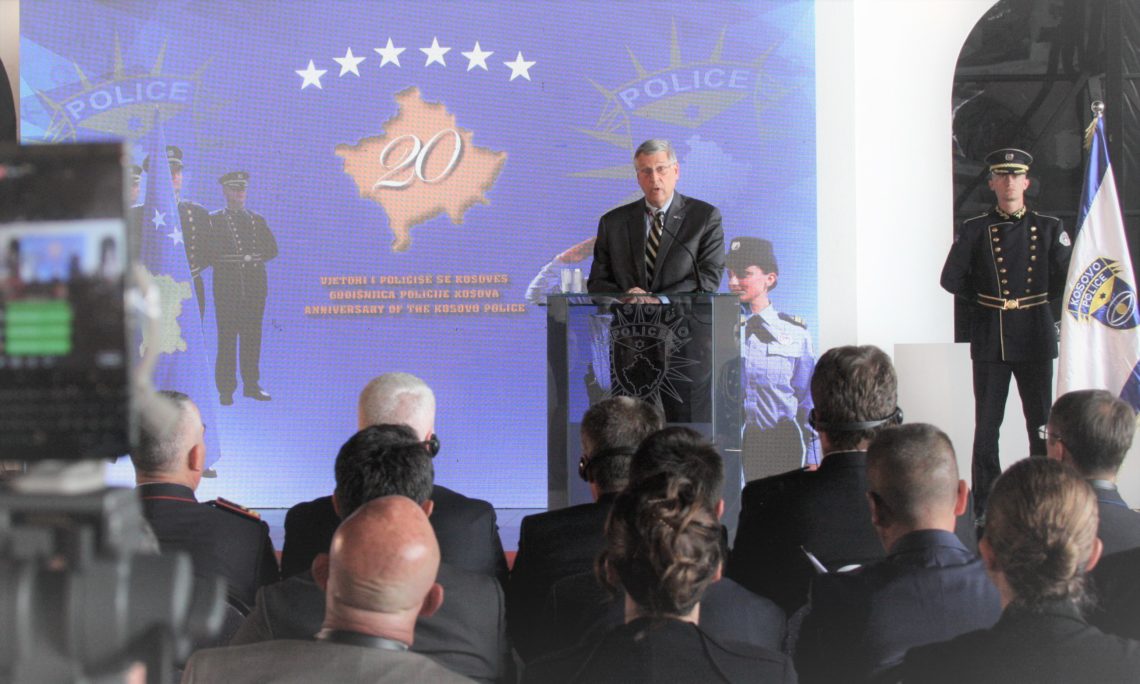 Mr. President, Mr. Speaker, Acting Prime Minister, Acting Ministers,  General Director, ladies and gentlemen, distinguished guests—good morning.  It is a privilege and an honor to be with you to mark this milestone of the Kosovo Police reaching its 20th anniversary.

I believe we can point to the development of the Kosovo Police – a professional organization with representation from all of Kosovo’s diverse communities – as one of the great success stories of the past two decades in Kosovo.  Today, Kosovo citizens rate their Police as the most trusted institution in the country.  The United States is proud to have played a role in the development and professionalization of the Police, through funding, training, and operational cooperation.  This has been a long-term effort, involving the U.S. Department of State and the Department of Justice– both of which have long had liaisons and training programs on the ground in Kosovo – alongside other American agencies.

Today, the Kosovo Police is an increasingly active and confident partner in global law enforcement. As other speakers have mentioned, the Kosovo Police has signed more than 80 bilateral and multilateral agreements enabling cooperation with other countries and international organizations, and has assigned police attachés in Kosovo embassies overseas.  There these attachés are playing a growing role in combatting international crime and terrorism, while helping to raise Kosovo’s global profile.

And today, the Police belongs to the people of Kosovo.  The Kosovo Police is more ethnically and linguistically diverse than Kosovo’s population, with 16% of Kosovo Police sworn officers—16% of 8,000 officers—coming from minority communities.  The Police have boosted women’s participation in the ranks to 15% – another notable achievement – and this year’s promotion of several female officers into the senior ranks was another important step for the Police and for Kosovo.  Sixty percent of the force report themselves as bilingual in Albanian and Serbian.

Whereas, 20 years ago, seeing a person in uniform may have created feelings of uncertainty for many people in Kosovo, today the police are working to ensure interactions with uniformed police instill a sense of trust, safety, and security in neighborhoods and communities – throughout the country – east and west, north and south.  The service is open and competitive, prioritizes the protection of human rights, rewards professionalism with promotion, and is working to address its own shortcomings.  These are the qualities that make young people admire the Police and wish to join.

The other speakers and I could keep you here all day repeating the achievements—praising the achievements—of the Police, but we need to get all these cops back on the street, don’t you agree General Director?  So, I would like to focus the remainder of my remarks on one topic – the Kosovo Police approach to Community Policing. Community Policing is a philosophical model different from merely walking a neighborhood or reacting to criminal and civil incidents.  Community Policing turns each police officer from a responder into a participant in community problem solving, where everyday people can realize the benefits of working together to tailor security and safety efforts to their community’s needs.

As we have seen in other countries – including, too often, in my own country – when the police do not share the experience, language, and the community ties of the people they are hired to protect and serve, all too often they can come to be seen as a force of state control rather than as servants of the public.  Relations improve and crime goes down when people see the police as their neighbors—when they see the police are not an external force.  Community Policing has been transformative in major cities in the United States, particularly in New York, which adopted and consistently invested in community policing over a period of decades. Community policing is already having the same effect here in Kosovo, helping citizens address crime, mending frayed ties between officers and residents, and making everyone safer.

I’ll give you one example: the municipality of Kline/a, an ethnically diverse community where thefts and property damage intimidated minority residents and made them want to leave their homes.  Police and citizens came together, developed a community safety plan, and established a neighborhood watch – one of more than 20 such cooperative programs the Police have established in recent years.  They installed signs warning would-be criminals that the community was watching and would no longer tolerate their attacks.  Villagers took shifts on watch, and they called the police when they saw suspicious behavior – and the crime spree stopped.

Ladies and gentlemen, as the Kosovo Police begins its third decade of service, I’d like to encourage commitment to even more enhanced Community Policing.  The next challenge the Police face in this regard may come with the upcoming election.  The Police must do their job, alongside other national and international institutions, to ensure that all citizens – in all communities – are free from political intimidation and political violence.

Allow me to conclude by saying that as the Police and the people of Kosovo face challenges on the road to peace, prosperity, and justice for all citizens, the United States of America will stand with you every step of the way.