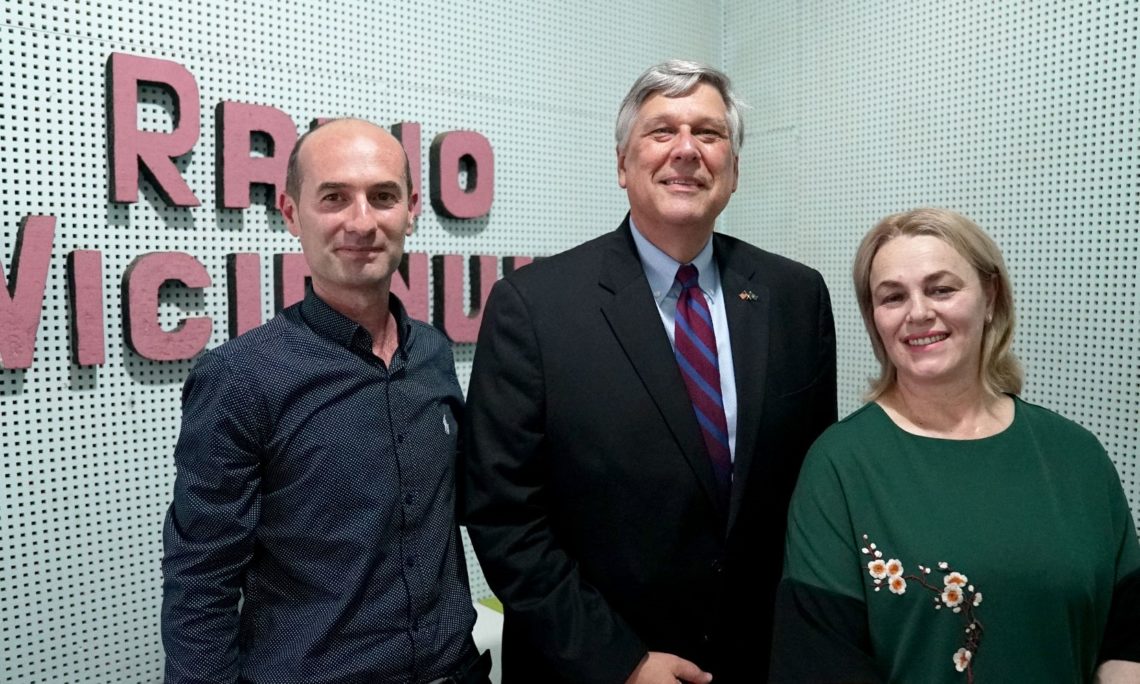 RADIO VICIANUM: Dear listeners, we are honored to have today in our studio the U.S. Ambassador to Kosovo, His Excellency, Ambassador Philip Kosnett. Welcome Mr. Ambassador.

AMBASSADOR KOSNETT: It’s a great pleasure to be here.

I have been hearing for months that Vushtrri was a model municipality in this regard, a really great example of the positive effect when municipal government and civil society work together. I was very impressed with what I learned today. We visited a few other institutions as well—we visited a wood products company that has benefitted from a grant from the U.S. Agency for International Development to help it get off the ground. We visited the Academy for Public Safety which receives a lot of assistance and cooperation from various agencies of the U.S. Government to strengthen the police. We met with Peace Corps Volunteers, which I always enjoy, seeing these energetic Peace Corps Volunteers who are working on projects with young people in Kosovo. Finally, we visited the castle, which has been redeveloped, in part, through a grant from the U.S. Embassy. These are all different areas where the Embassy is supporting the efforts of the people of Vushtrri to build a better future for themselves.

RV: Are the Kosovo people really using this assistance from the United States to their benefit? Are you happy with what you saw on the ground?

AMBASSADOR: I was very happy, very impressed, with what I saw on the ground today. I think that young people in Kosovo in particular, show a lot of energy, a lot of vision, for their own futures and for the future of the country.

The theme that I want to emphasize when talking about American assistance to Kosovo is that we are helping people of Kosovo become more self-sufficient, whether that means helping companies to get on their own feet, or helping to strengthen the professionalism and capability of government institutions. Our goal is to help Kosovo compete on the world stage and build a society with prosperity and justice and peace for all the people.

AMBASSADOR: I am. In fact, I would say that from what I have seen Vushtri can be a model for other municipalities in the country because I have seen how the municipal staff and civil society and ordinary citizens can work together to create a level playing field—equal opportunity for everybody doing business with the municipality. It’s this sort of model of transparency and openness that Kosovo needs.

I hear people complain a lot about the situation in Kosovo, the weak economy, lack of jobs, the corruption. These are certainly serious problems, but I think the solution doesn’t lie with anything that the international community is going to do. The answer lies with the people of Kosovo who have the ability and the energy and the courage to take control of their own future.

My last point is that the United States is committed to Kosovo’s success: to peace, justice and prosperity for all the people of Kosovo and the region. When I meet the sort of people I met today in Vushtrri, I am completely confident that Kosovo’s future is very bright.

RV: Can we understand from this that USAID’s and the Embassy’s support for the municipality of Vushtrri will continue?

AMBASSADOR: It will continue but let me also emphasize that the long-term goal here is self-sufficiency for Kosovo, not dependency. The sort of projects that we are funding are meant to build the foundation for the people of Kosovo to build their own future. So, our support will continue, but people shouldn’t assume that it will continue in the same shape that it has had in the past.

RV: What is the path that the United States and the Embassy are going to support for Kosovo to become part of the EU. We hear so many politicians talking about the issue that we are part of Europe, so what is the right path?

AMBASSADOR: Look at a map—you are part of Europe. It’s not a question of choice or what route to take. I think it is important for people of Kosovo to continue to strengthen their relations—politically and economically—with all their neighbors. That is the path to full membership in the European community. The United States will continue to work with Kosovo, with Serbia, with all the countries in the region to try to build a future of peace and justice and prosperity for everybody. We will support this process, but whatever solutions emerge have to be determined by the people in the region, and they have to be sustainable. It’s up to the people of Kosovo to determine their own path.

RV: Are central level politicians in line with this position of the United States?

AMBASSADOR: I think that Kosovo’s leaders are well aware that Kosovo’s future depends on peaceful relations with its neighbors and close ties with the rest of Europe. I don’t think anybody disagrees with that. At the same time, I want to assure you that the United States is committed to continue close friendship and partnership with Kosovo. There is no choice to be made: Kosovo needs close ties with the United States, and also with its European neighbors.

RV: Your excellency, our listeners would probably like to hear a message from you—what would that message be for Vushtrri citizens?

RV: Thank you very much for your openness throughout this interview. Thank you very for accepting the invitation to be part of an interview at this radio—our listeners have been waiting for this for so long.