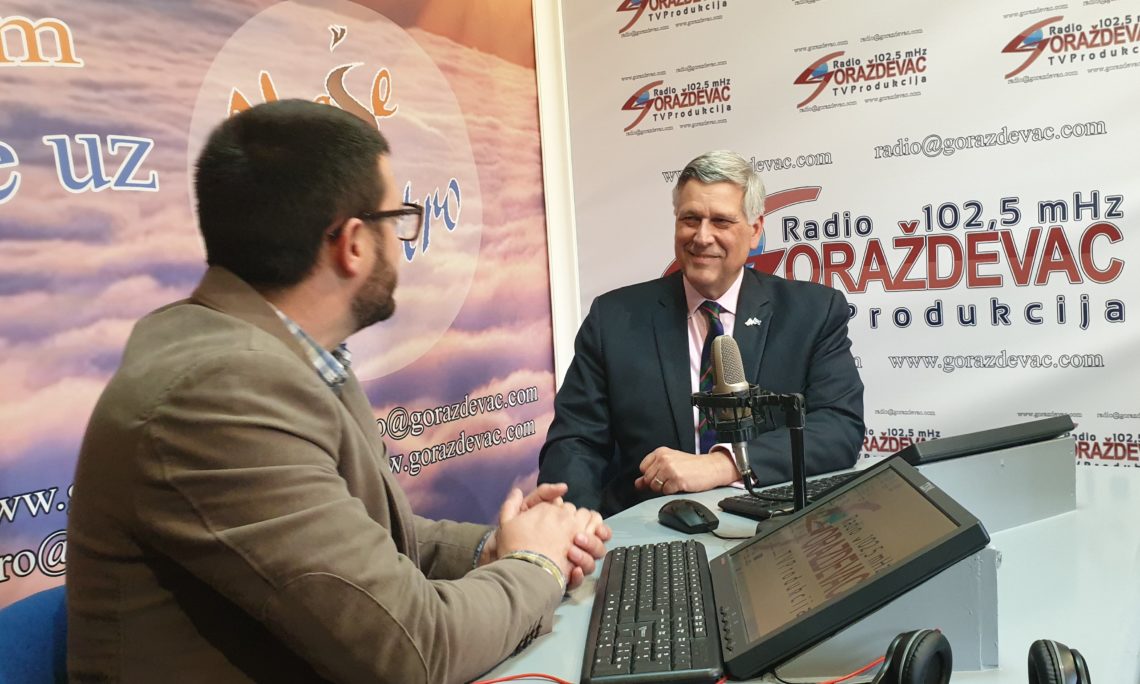 Radio Gorazdevac: Your Excellency, welcome to our studio and thank you for this interview.

Ambassador Kosnett: Thank you Darko, it’s a great privilege to be here.  It’s always enjoyable to get outside the capital to explore new parts of the country and get to hear different points of view from people throughout the country.

Radio Gorazdevac: To start maybe it’s important for you to tell us what is the reason for your visit to this region of Peja?

Ambassador Kosnett:  As an American Ambassador I think it’s important to visit all corners of the country, get to know people—not just government officials—but people who work in civil society, ordinary citizens, local people to understand not just their problems, but how they see the future and what opportunities they see for themselves in their communities.  So we travel—myself, my wife, my staff—around the country frequently and this is our first visit to Decani.

Radio Gorazdevac: Yes, what did you see in this region today?

Ambassador Kosnett: Today we visited with the Mayor, and also met with members of the Municipal Assembly, from all the different political parties represented there.  Then we had the privilege of visiting the Monastery, Decani Monastery, which is just an extraordinarily beautiful and historic site.  We met with Father Sava and some of the other people working there.  I just have to say that the Monastery is extraordinary and it is a reminder of the cultural heritage in Kosovo and the importance of Kosovo remaining a multi-cultural, religiously diverse country.

Radio Gorazdevac: OK, to speak about the important question of the Dialogue between Belgrade and Pristina. You know the negotiation is stopped, Belgrade has one request for tax to stop and Prime Minister of Kosovo, Mr. Haradinaj said the tax will not stop.  Where is the problem, how to start to continue this process, how important is it to continue?

Ambassador Kosnett:  First of all Darko, I think it is important that people not become discouraged about the dialogue process.  Of course, it’s frustrating when a negotiation reaches an obstacle and stops and then people have to think about a way forward.  It is the position of my government that suspending the tariff is an important step to regain momentum.   There are also steps that we would like to see the Government of Serbia take as well.  We’d like to see both sides approach the discussions in a spirit of flexibility and compromise.  We think that it is in the interest of both countries, and of all the citizens of both countries, to see a comprehensive agreement between Kosovo and Serbia that will result in normal relations and new political and economic opportunities for both countries.

Radio Gorazdevac: Yes, many politician representatives, Albanian or Serbian, are saying the next meeting to be in June in Washington DC, is that true and what is expected from this meeting?

Ambassador Kosnett:  I don’t have anything to announce at this time about a meeting in Washington.  I will say that the United States is deeply involved in the dialogue process in partnership with the European Union and with the people and Government of Serbia and the people and the Government of Kosovo. President Trump, as you know, has written to President Vucic and President Thaci to underscore the importance of the dialogue process and the commitment of the United States to see that we move forward.

Radio Gorazdevac: Many processes in the dialogue between Kosovo-Serbia are not being respected.  What has happened for the signed deal between Belgrade and Pristina?  You know Association of Serbian Municipality is not being created. There are many problems on both sides from dealing with the process in the past. What is happening with this?

Ambassador Kosnett: Darko, I think it’s important for me to note that the United States does not have a specific outcome in mind for the Dialogue negotiations.  What we want is to see the parties—Kosovo, Serbia—reach a comprehensive agreement. So we are staying away from arguing for specific outcomes—this or that. We think that if people get back to the table and start negotiating about a range of issues, that that would be the way to move forward. I’ d like to add that in addition to the role of the two governments in moving the process forward we think it’s very important that civil society , nongovernmental organizations, and ordinary citizens have their voices heard as part of this process. So we’ve encouraged the negotiating teams on both sides to listen to lots of voices in their own country and make sure that everybody who has role in the future, who has a stake in the future of the country, that their voices are heard as well.   We think that many times ordinary citizens and civil society organizations in Kosovo and Serbia actually have common goals and common interests and we would like to encourage more of that sort of cooperation and communication across international borders.

Ambassador Kosnett:   It’s my impression after being back in Kosovo—this is my second tour here—for about five months that Kosovo has excellent laws—the problem is that they are not always implemented fairly and quickly.  My government believes it is very important that people respect the rule of law, respect legal processes.  At the same time, if people working at the local level, if communities having open and honest communication with their neighbors, can resolve problems on their own peacefully without a lot of legal process, without a lot of lawyers, that can work too. What we think is simply a mistake is for governments to implement court decisions only if they like them.  It is simply not appropriate for government leaders at any level to say, ‘OK, well we lost in court so we are not going to implement the decision.’ That is the position that my government is going to continue to maintain.

Radio Gorazdevac:   But how to implement these decisions?  For example, Decani Monastery has a problem. Many people from Serbian community from Peja/Pec have similar problems. For example,  Milorad Djokovic has a problem with municipality regarding a piece of land and the Court decided in his favor, but the municipality doesn’t accept the decision. What should one do, in this case?

Ambassador Kosnett:  I don’t want to speak in great detail about specific cases where I may not know all of the ins-and-outs. But, I want to emphasize again, that it’s important that municipalities and the national government respect the legal system, respect the decisions of courts.  It’s also important for citizens to take the same point of view that they will respect court decisions even if they are not directly involved.  I’ve said before in public, there are a lot of people who may think that the property rights of the Serbian Orthodox Church are not their problem. But people all need to be confident that if they have a property issue, or any sort of legal issue, they can trust the court system.  It’s important for people who are not directly involved in a certain case to respect the outcome of the court’s decision or otherwise rule of law doesn’t work for anybody.

Radio Gorazdevac:  With regard to corruption – it is visible at all levels. How can this be stopped?

Ambassador Kosnett:   When we speak of corruption there are many different levels or flavors of corruption, if you will.  We have to think about people in positions of authority, positions of trust, misusing that authority or stealing money – I mean that’s a problem, those things happen.  Equally of concern is the sort of everyday low-level favoritism, nepotism, cronyism.  Where people feel—ordinary  citizens feel—that they can’t get ahead on merit.  If they don’t have the right friends or the right relatives then they can’t get jobs and they can’t get positions.

There are polls that indicate that only something like 20 percent of young people in Kosovo believe that merit is the way to get ahead. This is really a dangerous and insidious form of corruption.  It has some cultural roots, but, it’s important for everybody to understand that they have a role to play in fighting corruption. It’s not just for government, it’s not just for the international community.  Kosovo is a democracy and individual citizens have ways of making their voices heard: they can vote, they can speak out and write, they can organize.  When I hear people in Kosovo say ‘Oh, corruption is a terrible problem but, I can’t do anything about it,” I want to say to those people this is your country and you have to work together in order to build the sort of society you want to live in.

Radio Gorazdevac: Civil society says that there are very good laws written on paper, but people still find ways to be corrupt. What needs to be done so the law is respected?

Ambassador Kosnett:  I think that there is a role for civil society, for citizens, for journalists……RG: you mean monitoring…..AK: that’s exactly right.  Every day you can be working to shine a light on corruption.  It takes courage, it takes hard work, but there is a very vibrant media sector in Kosovo and we respect the role it plays.  I have found that when citizens work together to fight for an open, honest political system, they can make progress.  It is important that people not be resigned to thinking that they don’t have the power to make change.

Radio Gorazdevac: Lastly, do you have a message for people living here, for listeners of Radio Gorazdevac, for the Serbian community or others who are listening or watching?

Ambassador Kosnett:  Let me say that as a representative of the United States, it’s an enormous privilege to live and work in a beautiful country like Kosovo.  I have a lot of faith in Kosovo’s future. One of the aspects of Kosovo society that I respect, and that the United States and Kosovo share, is that it is a multi-ethnic society, it is a religiously diverse society.  I think it’s important that members of minority communities work and struggle to build a future for themselves and their children here in Kosovo. I think that Kosovo would be a very different sort of country, and a much less interesting sort of country, if the minority communities did not have a strong vibrant role and a future here. The United States looks forward to doing what we can to support all our friends in Kosovo to live in a society where peace and justice and prosperity are growing for the future.

Radio Gorazdevac: Your Excellency, thank you for the interview.