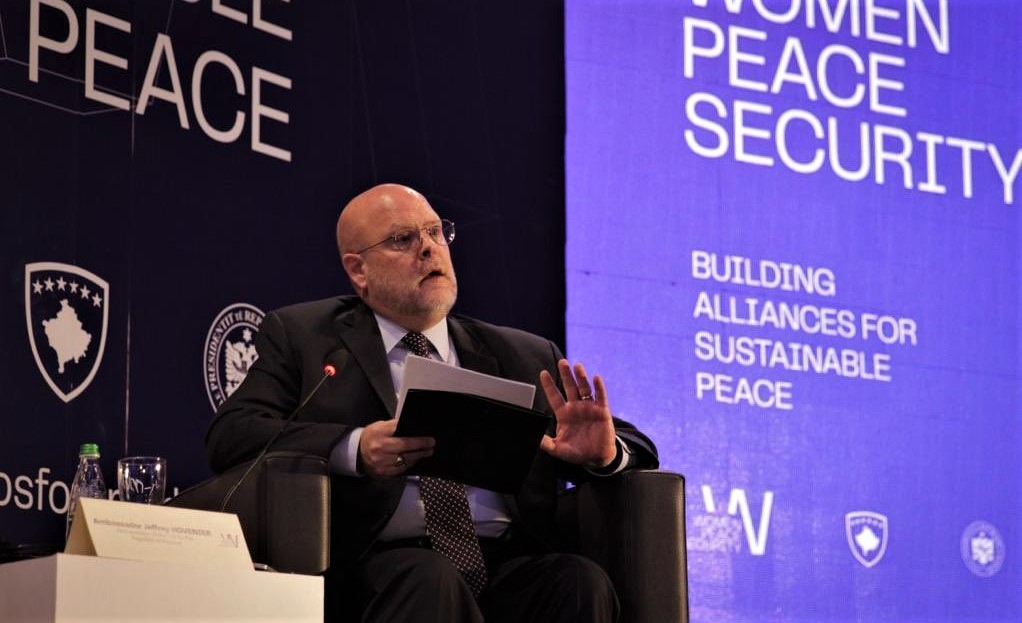 I’m honored to join such an illustrious group to share my thoughts on Secretary Albright’s impact and legacy.

Those who have spoken before me, including that moving message from Secretary Blinken, have highlighted Secretary Albright’s exemplary leadership and legacy, particularly in the Balkans and with Kosovo.

Few diplomats have had such a direct effect on so many individual lives. She literally saved lives. She also worked tirelessly to bring perpetrators to justice, ensured victims had redress, and built and strengthened institutions to advance peace and security.

But I wanted to share a powerful and personal experience that I had with her over 26 years ago.

It speaks to her commitment to the region and to ensuring that people of all ethnicities, religions, and backgrounds could live in peace and security.

But even more than that, this is a story about her absolute willingness to stand up to aggression and be unyielding in her principles.

So, let me set the stage.

In March 1996 I served at the U.S. Embassy in Zagreb; Madeleine Albright was the U.S. Ambassador to the United Nations at that time.

The U.S. had helped achieve an agreement to peacefully reintegrate into Croatia a rebel Serb-held territory in Eastern Slavonia over a two-year period.

A United Nations Peacekeeping Mission – The UN Transitional Administration for Eastern Slavonia (UNTAES) – was established to carry out that peaceful transition.

Then-Ambassador Albright – who played a leading role in the Security Council to reach agreement on UNTAES’ mandate – decided to visit Croatia to underscore the U.S. commitment to this agreement and to see the region for herself.

I was the person at the U.S. Embassy responsible for the planning and execution of her trip, working with my colleagues from UNTAES.

She came with very specific messages.

She wanted to reassure the government of Croatia

To the ethnic Serb residents of this area, she delivered a related, but different, message:

Then-Ambassador Albright met first with President Tuđman and other Croatian government officials. We subsequently traveled to Vukovar – the principal city in Eastern Slavonia where UNTAES was based.

We met with the local Serb leaders, after which she gave a press statement where she made the U.S. government position extremely clear.

And since she said it better than I can, I’ll turn to the video:

She had asked that the schedule include a tour of Vukovar. As many of you know, the population had suffered ethnic cleansing and the city was destroyed during a 1991 siege by the Yugoslav People’s Army and paramilitary forces. She wanted to bear witness to the atrocities that had taken place in Vukovar.

I’ll play some footage so you can see how our city tour turned out.

And if you look closely, you might just see a cameo by yours truly. I also note that my current colleague here in Pristina, Swedish Ambassador Jonas Westerlund, served in UNTAES at that time was also present supporting this visit.

Things did not go well. A group of angry men approached and protested her presence.

The protest quickly become a threatening and violent. The mob threw rocks at us and broke the windows of our van as we quickly departed. A few of us had minor injuries, while she was whisked away fairly quickly.

It was clear that this angry mob of people, who said horrible things about her, considered her to be the personification of a U.S. policy they disagreed with, particularly with regards to our use of force at the end of the Bosnian war.

We were all shocked, but we continued our program.

Our next stop was a visit to a Catholic church in the town of Ilok that had stood as an example of continued multiethnic cooperation due to a priest who had stayed to protect the church and who had befriended and supported the elderly ethnic Serb and Croatian residents who had remained there.

I remember very clearly while we were in the church that she turned to my boss, Ambassador Galbraith, and me and said “I have to say something about what just happened. I can’t let this stand.”

So we quickly got the press together out in front of the church. We had no idea what she would say.

Without any script or plan, here is what she said:

This, to me, is quintessential Madeleine Albright.

She had just been threatened by a mob that objected to her, her values, and what she stood for. Her steely-eyed response was emphatic:

After her press statement, she said to me: “I will not tolerate bullies.”

This experience demonstrated to me her readiness to speak out and her refusal to be intimidated into silence when confronting threats or violations of principles.

Secretary Albright’s incredible courage and resolve – and relentless ability to stand up to bullies – is a thread that runs throughout her public life and career.

This particular story is just one that I happened to be very close to personally – though I know there are countless examples others can cite.

I’m grateful that I had the opportunity to see a true, principled, and visionary leader in action that day. And like all of you, I’m grateful for her legacy and her impact on all of us and on the world.