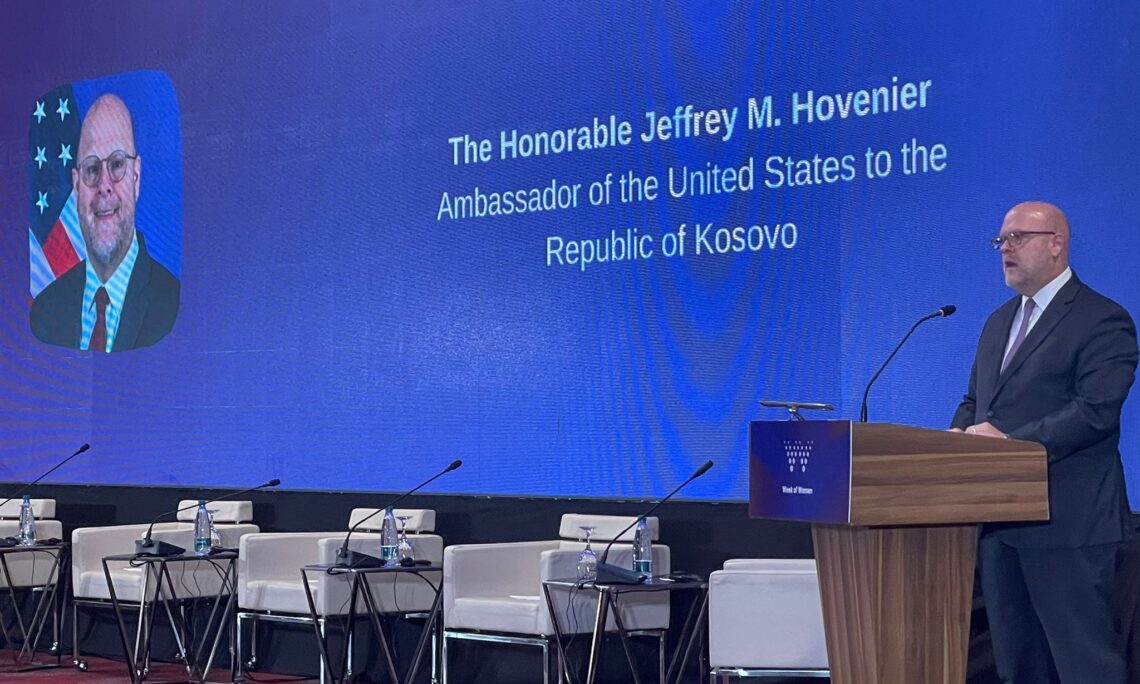 Ambassador Hovenier’s Remarks at the Week of Women, March 15, 2022

President Osmani, Prime Minister Kurti, Mr. Krasniqi, Mr. Abdixhiku, and Mr. Haradinaj, esteemed guests and participants, it is an honor to be here.

Thank you, Nancy, for your kind introduction, and to the NDI team for bringing us together today. The Embassy is proud of our long partnership with NDI, and with the women and men of Kosovo in advancing gender equality and access to opportunities in Kosovo’s political institutions.

I am particularly pleased to be able to be part of this year’s Week of Women because the theme – why inclusive democracy matters – is one that resonates strongly with me, and is a priority of the United States Government.

I have a deeply held belief that the full participation of women in public life is fundamental to building and sustaining a vibrant, inclusive democracy.

We all have a moral responsibility to champion diversity and inclusion wherever and however we can.

We celebrate the impressive progress that Kosovo has made to further the number of women political leaders during this 10th anniversary of the Week of Women. Many of you in the audience today are to be thanked for that progress. We are joined by some of Kosovo’s strongest advocates, dedicated activists, and steadfast supporters of women’s rights and political leadership.

Ten years ago, NDI created the Week of Women program as a platform to empower local women leaders with skills to assume greater leadership positions. Since then, close to 900 people have been trained in public speaking, constituent outreach, election campaign implementation, and more.

Week of Women alumni have gone on to play integral roles throughout Kosovo in political parties, media, and civil society. More than 100 alumni have run for office, and at least 18 have been elected to public office.

When we look around, we can see evidence of the changing face of politics – we are encouraged by the election of Kosovo’s second woman president, the appointment of two women deputy prime ministers, the appointment of women for one third of the positions in the current cabinet, and as chair of eight out of 14 parliamentary committees.

In the local elections in the fall of 2021, we saw more than 60 percent of women elected without reliance on a quota. This is impressive.

And, we are starting to see more women candidates for mayoral positions, more heading their party lists, and more elected to key local-level leadership positions.

Still, this is far from sufficient. There is still a lot of work to be done.

On corporate boards, governmental councils and in political parties, it is not hard to imagine a table of decision makers that is still predominantly men. We still see it all the time. It is so ordinary for men to drastically outnumber women that, frankly, we often don’t even notice. We become numb to the problem of the underrepresentation of women.

Women are over half the population, yet they are too often not at the table when important decisions are being discussed or made. With such disproportionate representation, that means that men are not only forming consensus on the final decisions, they are also having outsized influence on which decisions to discuss in the first place.

This kind of imbalance is out of step with the values of contemporary society. When women are not present to assist in identifying, developing, and making decisions it is too often the case that key inputs are missed and ultimately problems are not solved for the whole of society.

On the other hand, when we review decisions that were reached with the equal participation of women and diverse minorities, we see a policy-making process that mirrors the population more closely — and more importantly, that reflects the interests and concerns of a much greater range of citizens.

Not only does inclusive decision-making allow more issues and perspectives to be part of the discourse, it also begets more inclusion. The more women who are included, the more public perceptions about the kinds of roles women can take on in society are altered. The more women are encouraged to be active in politics, the more inclusive the table. The stronger the democracy. We should be striving to make this our new normal.

This Week of Women is an opportunity for us to recommit ourselves to the goal of gender parity in all levels of decision-making bodies in Kosovo’s political and public life. I’m committed.

For all countries, the equal participation of women is one of the markers of progress. It reflects both how far we have come and how far we have to go. This requires constant attention. We must remind ourselves that we have committed to these principles, and we did so because it allows an entire society’s voices to be heard, and provides the framework for better policies to be made.

There will be a whole year of action related to the Summit for Democracy concluding with a second summit at the end of 2022.

There are many more steps that need to be taken. For example, while more women are running in local elections, this isn’t resulting in equality of representation for all political offices – that is why we need to understand and overcome the impediments to greater numbers of women being elected to positions at the local level.

We know and we see it all too often that women running for office and in Kosovo’s public sphere encounter sexism, misogyny, and violence.

We see that in the media, women are much more frequently attacked for their appearance and too often subject to offensive and sexist language.

Online, women in politics are regularly threatened, bullied, and harassed. We need to redouble efforts to stamp out these attacks. In any form, acts of intimidation stand as strong deterrents for women and girls to imagine themselves in leadership roles and pose immense barriers to women’s meaningful political participation.

Women in Kosovo are also underrepresented in both political party structures and in the media. Public debates and panels, referred to sometimes as “manels” for their disproportionate numbers of men, also lack women representation. This needs to change and we need to be the agents of change.

While we have come so far, and we should all reflect proudly on the progress of women in political life and what we have accomplished, we know there is much more yet to be done.

As the debates and discussions get underway this week, I call upon all of us – government, civil society, political leaders, and activists – to embody inclusive democracy, promote change, and acknowledge the collective responsibility of all democratic institutions to ensure women have an equal voice in social, economic and political decision-making.

Her legacy has inspired a generation of women determined to not just have a seat at the table – but an influential seat – from the local level all the way up to the national level.

Ruth Bader Ginsberg is often quoted as saying, “Women belong in all the places where decisions are being made.” It is our job to make this quote more than an aspiration – and to work together to help Kosovo reach its potential as a truly inclusive democracy.

Justice Ginsberg set the bar high, musing: ”When I’m sometimes asked when will there be enough [women judges on the US Supreme Court bench] and I say, ‘When there are nine,’ people are shocked. But there’d been nine men, and nobody’s ever raised a question about that.”

We have serious work to do. I wish you success at this year’s Week of Women and I thank you all for your commitment to gender equality in Kosovo. You have a steadfast partner in the United States.