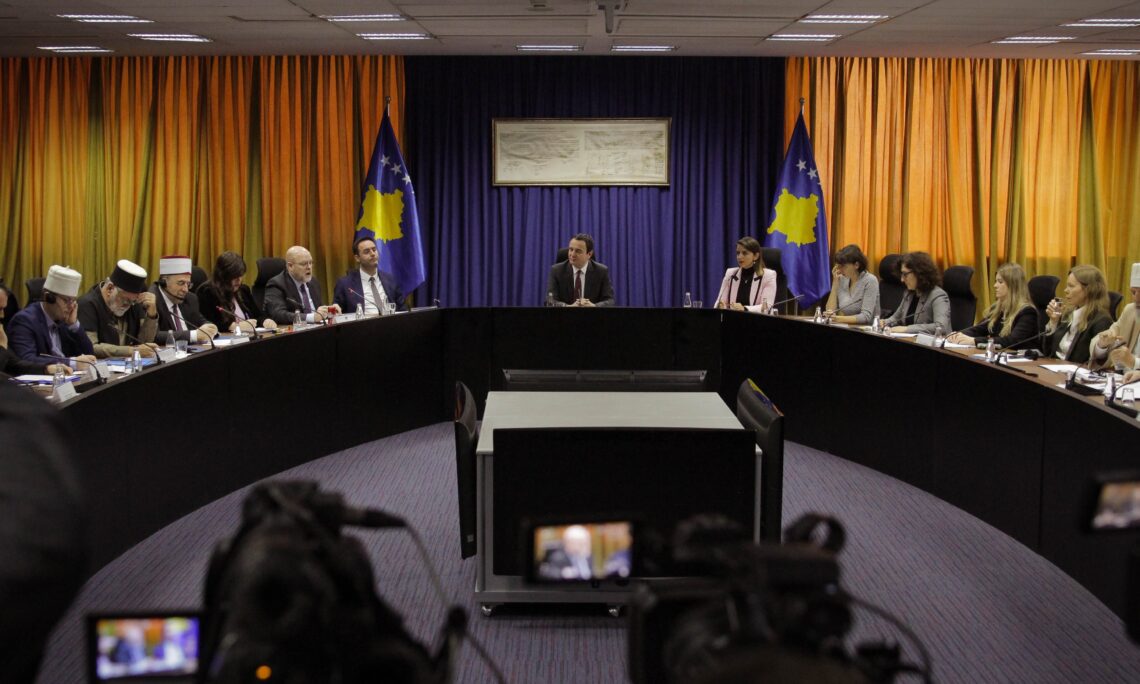 Mr. Prime Minister, Mr. Speaker, distinguished leaders and representatives of Kosovo’s religious communities, thank you for this opportunity to speak with you today.

It is a privilege to join you as you open this public discussion on the draft amendments to the Law on Religious Freedom.

While I am honored by the opportunity to speak with you about these profoundly important issues, I want to acknowledge that the most important comments during today’s deliberations will come from you.

You have the chance – the opportunity – to ensure equal protection and free expression of religion for all in Kosovo.

The concept of freedom of religion as a basic human right is not new.  More than 1800 years ago, the theologian Tertullian wrote, “it is a fundamental human right, a privilege of nature, that every person should worship according to their own convictions.”

This ancient idea – that every individual should have the right to freedom of thought, conscience, and religion – has persisted through the centuries, codified more recently in the Universal Declaration of Human Rights and the International Covenant on Civil and Political Rights.

The United States has long been committed to the right of individuals and groups to exercise religious belief freely and without constraint.

Indeed, the history of the United States is so entwined with the pursuit and protection of religious freedom that it would be impossible to give the topic justice in the brief time I have with you today.

But I would be remiss if I failed to mention that my country’s founders felt the issue of such importance that they addressed it in the very first phrase in the very first amendment to the U.S. Constitution:  “Congress shall make no law respecting an establishment of religion, or prohibiting the free exercise thereof.”

Free exercise of religion – a universal human right – is more than just the right to individual belief.  It also includes the right to organize and practice one’s religion with others, and to be recognized by the government.

Here in Kosovo, the government has sought to protect freedom of religion and belief as a fundamental human right through its Constitution and the Law on Religious Freedom, an important – if imperfect – piece of legislation.

As you know, the U.S. Embassy reports to our Congress annually on the status of religious freedom in Kosovo and in every other country around the world.  For more than a decade in Kosovo, we have highlighted the lack of legal status for religious groups as a major flaw that leaves minority religions vulnerable to discrimination.  And for more than a decade, we have encouraged the government to adopt amendments to the Law on Religious Freedom to address these problems.

The amendments that you will discuss today have the potential to correct these deficiencies in Kosovo’s human rights legislation and bring Kosovo closer to international standards regarding equal protection of individuals and religious groups.

As you discuss the draft legislation today, I urge you to keep in mind not only what you can accomplish for members of your own faith, but for other religious communities as well.

I urge you to recall the Venice Commission’s recommendations in 2014 on Kosovo’s proposed amendments to the Law on Religious Freedom – to eliminate excessively burdensome constraints or conditions for obtaining legal status, including high minimum membership requirements.

I want to highlight that amendments to the law proposed nearly ten years ago required 50 members as a minimum to register, not the higher number of 100 members in the current draft.

The United States recommends removing any and all references to minimums, and I’ll note that there are other European countries that align with U.S. policy of not having any registration requirements.

In the Netherlands, for example, the government grants tax exemptions to any nonprofit and nonviolent group “of a philosophical or religious nature” – no matter how small – that contributes to the general welfare of society.

I also encourage you to carefully consider the role of the government in evaluating, assessing, or validating religious belief or affiliation, looking particularly at the proposed Commission to review applications for registration.

It is advisable to reconsider any legislation or restriction that would force a religious group to be part of another religious group.  Religious communities should self-define.

This caution against any state definition or assessment of religious authenticity is not unique to the United States.  Again, I cite the 2014 Venice Commission recommendations for Kosovo’s Law on Religious Freedom, which referenced a 2001 court case of the Metropolitan Church of Bessarabia v. Moldova, in which the court stated:

“The right to freedom of religion…excludes assessment by the State of the legitimacy of religious beliefs or the ways in which those beliefs are expressed.  State measures favoring a particular leader or specific organs of a divided religious community or seeking to compel the community or part of it to place itself, against its will, under a single leadership, would also constitute an infringement of the freedom of religion.  In democratic societies the State does not need to take measures to ensure that religious communities remain or are brought under a unified leadership.”  (emphasis added)

Again, I emphasize the importance of carefully considering and discussing inclusivity when you consider these amendments.  It would be better for all religious communities to be allowed to register – regardless of size, regardless of how long that faith has been practiced in Kosovo – than to create barriers that discriminate against individual and collective expressions of belief.

We are confident that the amendments you will deliberate and discuss today can and will resolve many of the problems cited in our annual International Religious Freedom Report.

We welcome the efforts of the government to engage religious communities, to listen and respond to their concerns and guidance, and to incorporate their recommendations and input into revised amendments.

The current law on religious freedom declares the government “shall maintain an open, transparent and regular dialogue with religious associations, [and] religious communities in matters of common interest,” and this public discussion certainly honors that commitment.

And we applaud the presence, participation, and advocacy of faith-based groups here today.  I know the religious communities here in Kosovo have a strong tradition of inter-faith communication, and I am confident that they will build on that foundation of partnership and honesty to work together in good faith to ensure all Kosovans can exercise the right to express – or not express – freedom of thought, conscience, and religion.

Thank you again for the invitation to speak with you.  These amendments are long overdue.  You have in your hands the opportunity to complete this work that started long ago.  I trust that you will work together to refine and help pass these amendments and protect this most basic of human rights.

Today, you can put into action our universal responsibility to preserve and protect religious freedom, and to demonstrate Kosovo’s positive tradition of inter-religious cooperation as a value to pass on for generations to come.