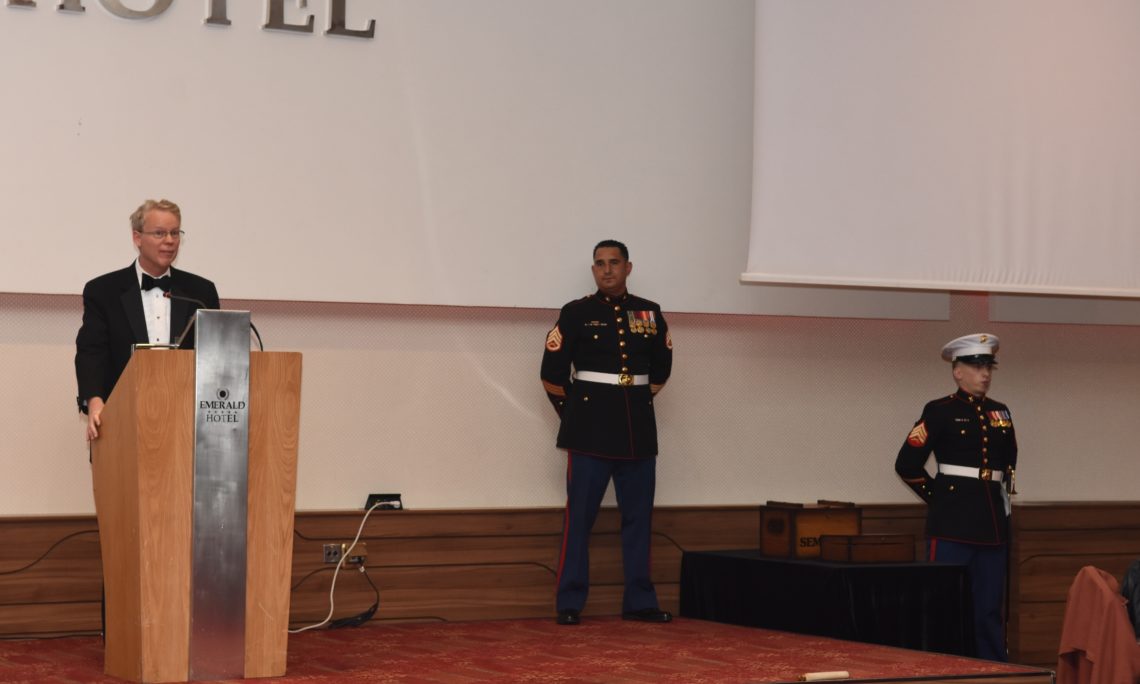 Good evening and welcome to the American Embassy Marine Security Guard detachment’s celebration of the 241st birthday of the United States Marine Corps.

It’s a pleasure to have you here.

We have many guests from Kosovo and other countries here tonight.  So can I make a special request on behalf of the Americans in the room?  There is a significant event happening in our country next Tuesday.  We don’t want to talk about it.  Okay?  We are here to celebrate the Marines and to have fun.  If you want to talk about the future in the U.S., let me give you a hint.  Thanksgiving is coming up.  That’s a safe subject.  Or I heard it snowed the other day.  Please!

I want to thank Staff Sergeant Morales and our entire team of Marines for allowing us to celebrate with them today.

One of the highlights of my nearly 34 years in the Foreign Service is attending the Marine Corps Birthday Ball. I have told you before that I share my home town, San Diego, California, with one of the two places in the world where ordinary mortals are transformed into Marines.  That is one reason why the Marines have always had a special place in my heart.

And I speak for all American diplomats when I say that you are special to all of us.  It is a great honor for us to be able to celebrate your birthday with you. You are the ones who make it possible for us to do the important work we do.

I suspect that the work Marines do today was far from the minds of those who, by an order of the Second Continental Congress, founded the United States Marine Corps on a cold November day in 1775 in a tavern in Philadelphia.  I am sure they pictured this smallest military unit in our armed forces fighting in our wars and securing our freedom. And they have done that with distinction.

But I doubt in 1775 that they pictured the work the Marines do under the Marine Security Guard program. I am incredibly proud of the strong partnership the State Department and the Marines have forged over the past 68 years. The Marines who protect Diplomatic Missions around the globe are the best of the best. They epitomize the American values of integrity, courage, loyalty and commitment.  Nearly 2,500 of these brave men and women serve in 150 of our Missions abroad.   Some of them not even old enough to drink in the U.S., put their lives on the line to allow us to do the work that we do in some of the most dangerous places on earth. Fortunately for all of us, Kosovo is not one of those places.

Still, there are challenges here of a different kind.  This is a country that just a few short years ago was ripped apart by war. Today, helped in no small part by the peace our military helped forge, Kosovo is a country where there is hope.

Now I am no Pollyanna. I know there are lots of problems left to solve in Kosovo.

At the same time, we can celebrate many positive developments over the past year. Kosovo was a finalist for an Oscar with the movie “Shok”; apart from the film’s qualities as art, which are substantial, think how many people around the world now know something important about this country that they would never have known without the great work by the film’s talented cast and production team.

And while we are talking about show business – and I am from Southern California so how can I resist – I want to point out to everybody here that the application deadline for the Youth Film Fest is December 1!  The Embassy’s Youth Council is working to make sure everyone who wants to is ready to contribute entries; they are sponsoring a free “how to movie workshop” next Friday at the Innovation Center of Kosovo. Mark your calendar for the workshop; did I remember to mention it is free?

Kosovo is now a member of FIFA and UAFA, so all those talented soccer, — I mean football — players, can compete for their own country instead of helping places like Switzerland and Albania win! And of course, there was Kosovo’s first appearance under its own flag in the Olympics. And talk about a grand entry!  Majlinda Kelmendi brings home its first medal and it was gold!

I also see a bright future in the faces of the young people I meet regularly. Kosovo’s youth embody the kindness, hospitality and tolerance for which the people of the Balkans are known. They focus on the future, and how they can make Kosovo a better place for all of its people.  Tonight, we have three special young citizens of Kosovo with us.  They are LT Zoranic, LT Denic and LT Hoxha.  They are KSF Members, one who recently led his unit to a Gold Medal at the Cabrian Patrol, and the other two are the first Serb and Bosniak Officers in the KSF.  I am so pleased to have them here and representing the diversity of the KSF.

I also want to welcome MG Fungo, the Commander of KFOR, and his chief of staff, BG Anslow who are with us tonight.  KFOR is another positive factor for Kosovo, ensuring that all of its citizens enjoy a safe and secure environment and freedom of movement throughout the republic.  Yesterday I was Hohenfels, Germany, meeting with the American contingent of soldiers headed here next week to take up their positions at Camp Bondsteel and elsewhere in Kosovo.  It was truly inspiring for me to see so many young men and women, most of whom have never been here at all, already so knowledgeable and positive about Kosovo and the important NATO mission that they will be fulfilling.

History is made by people like those I have mentioned this evening, those with positive solutions, those who solve problems rather than create them. That is why I am optimistic about Kosovo, because it is filled with so many young people focused on positive things.

And our mostly young Marines at the Embassy are in this same category.  They are all about fulfilling their mission and getting things done.  They are a positive example to me.   To the rest of the U.S. Embassy.  And to the citizens of Kosovo they interact with every day.

And so it is a personal honor and privilege for me to be able to celebrate this day with you, Marines.

Secretary Kerry shares that feeling of privilege at the special relationship we diplomats have forged with the Marine Corps.  Please allow me to share his birthday greeting with you:

With that, ladies and gentlemen, may I ask you to please raise your glasses and join me in a toast to those who put their lives on the line so that we may enjoy freedom and democracy:

To all our fighting men and women, a salute;