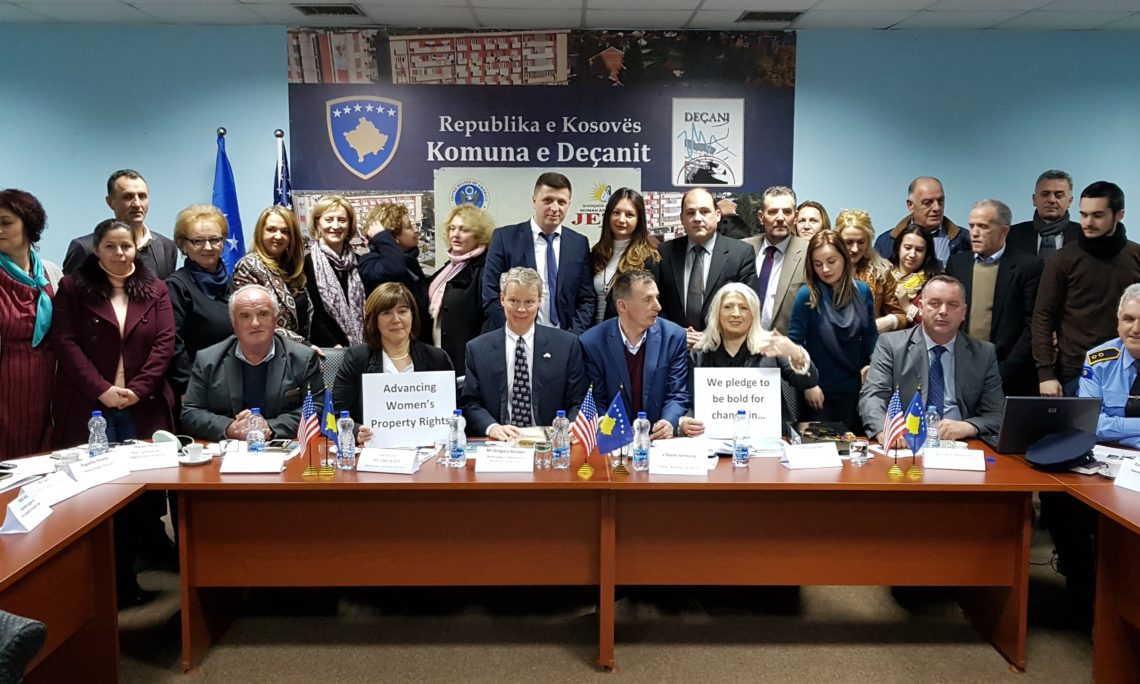 I’m very happy to see so many people here today who are interested in this very important topic.

Progress on women’s property rights is one of my top priorities, and something that I feel quite strongly about. This topic brings to the fore so many critical issues that we all care about: women’s economic empowerment, social inclusion, human rights, the rule of law, not to mention Kosovo’s economic development. I think the extent to which women are able to thrive in Kosovo’s economic system is an indicator for Kosovo’s economic growth as a whole. And when we see that only 4% of women in Kosovo are able to inherit property and land, that only 19% own land, we know there is room for improvement.

Of course, this issue is also far too personal to be a simple matter of statistics. My staff shared a story with me about one Kosovo woman on our own team who successfully bought property, only to then travel to the local municipal office and find herself strongly discouraged from registering this same property. The municipal official argued with her over her rights and tried again and again to convince her not to register the property. Ironically, his argument was that one day she would inherit property from her father, and therefore simply didn’t need to buy land on her own. She was lucky.  She knew her rights and she stuck to them.  But we cannot ask every woman in Kosovo to face such obstacles. And this wasn’t a problem of the law. Kosovo has good laws on the books that guarantee a woman’s equal right to property and I think that’s great.  But I think I’m troubled by the degree to which these laws are not yet consistently enforced.

In some ways, this would be an easier problem to solve if it simply required a change by the Assembly in the law.  But this is an issue that is much deeper. It’s deeper because the right to own and inherit – these are not secondary economic benefits. These are fundamental human rights, essential to both equality and empowerment.

And this is not just important for the women of Kosovo, but for all of Kosovo’s citizens. Looking around the world, we know that when women are empowered, they participate more effectively in their communities, the economy, and in political conversations. And when women have a stronger voice, a loud voice, community institutions themselves are more likely to be responsive to the needs of the community as a whole. Along with national-level initiatives, like the recently approved National Strategy on Property Rights, which I will help to launch in February, community programs such as this one are critical to ending the informal practices of omitting women from lists of legal heirs, or coercing women to renounce their property rights in favor of male heirs.

Rights are guaranteed to women under Kosovo’s Constitution and its Law on Inheritance. And so to me, on a very basic level, upholding these rights is about Kosovo’s ability to behave as a modern European country and to uphold the rule of law. As I noted a few weeks ago at the Women’s Economic Forum, failure to make progress on these issues simply erodes Kosovo’s ability to grow its market economy, build prosperity, and pass it on to the next generation. Because the evidence from around the world shows clearly that greater participation by women in a country’s economy is a big part of what leads to greater prosperity for all.

I’m not saying this is easy. Progress on gender equality is harder than it should be. But by participating in events like this, you are demonstrating your convictions and your direction, and that you are moving in the right direction.

I know that so many of you are working hard to bring about real change, to eliminate obstacles to fully exercise property rights for women, and we are proud to be your partner in this important work. Thank you for your efforts, and together, I know we can all do better.  Once again, I appreciate the invitation to be with you today.