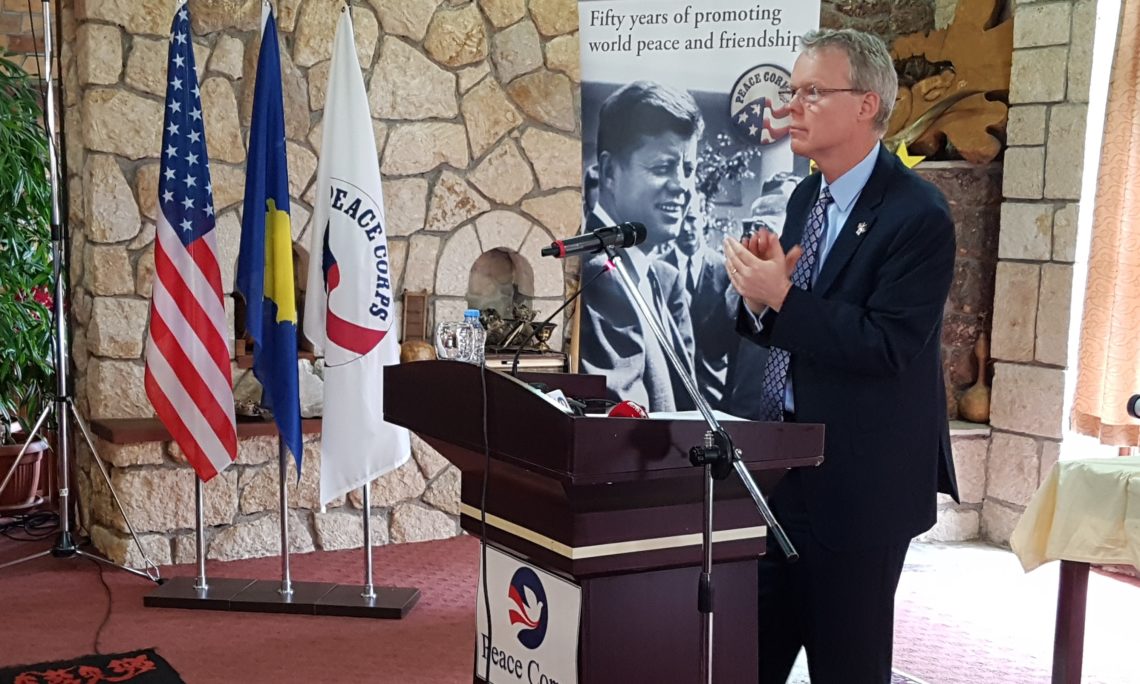 Ambassador Delawie’s Remarks at the Swearing-In of the Fourth Group of Peace Corps Volunteers in Kosovo, August 17, 2017

Good morning everybody. Minister Bajrami, Minister Kamberi, honored guests, and Peace Corps Volunteers, it is a real pleasure to be with you today.

I got here just about two years ago and one of the first things I did was to come to this very restaurant to swear in the Peace Corps cohort that got here two years ago and left just over the last couple of weeks. I was back a year ago, and I’m back today. This is because I believe in the Peace Corps, I believe in you, and I believe in the terrific partnership that our two countries have that is symbolized and made concrete everyday by Peace Corps Volunteers throughout this country teaching English to the citizens of Kosovo from a variety of ethnic communities.

Peace Corps Volunteers represent a partnership between our two countries to promote the development and prosperity of Kosovo and to build a strong foundation of understanding between the people of our two nations.

The United States is one of Kosovo’s best friends and supporters.  The partnership between our countries is deep and multi-dimensional, and we work hard every day to advance our common goals of democracy, security, and prosperity.

There is no more tangible manifestation that the United States is extending the hand of friendship than the presence and dedication of Peace Corps Volunteers such as yourselves.  Your work here and the spirit with which you carry it out will change lives and will give Kosovo citizens direct exposure to American values.

The Peace Corps represents a viable and visible symbol of America’s contribution to world peace efforts.  Three goals have defined the Peace Corps mission since the program began during the Presidency of John Kennedy in 1961:

Peace Corps is very much about people exchanging ideas and working together, learning about each other, transferring skills and knowledge, sharing experiences, and fostering understanding and goodwill.  Previous Peace Corps volunteers’ accomplishments in Kosovo include:

These are just a few highlights of the important work Peace Corps volunteers do every day.  I am confident that you will meet your own goals for your Peace Corps Service.  You have the opportunity in the next two years to change someone’s life for the better, to give and receive new perspectives, and to make a difference in the lives of your students, planting seeds that will grow long after your Peace Corps volunteer service is over. I think your lives will change as well as we have heard. On my team at the Embassy, we’ve got a number of returned Peace Corps Volunteers and those here, I’d like you to raise your hands so others know who you are.

I would also like to express special appreciation for the families who have been hosting Peace Corps Trainees in their homes.  This is an essential component of the program and provides unique opportunities to build close ties between the people of our two countries.

I’ve learned a lot in my two years in Kosovo, and you will learn a lot in your two years in Kosovo. My best wishes to each of you for a successful Volunteer service.  And my heartfelt appreciation for your dedication to international understanding and to the weaving of closer ties between the United States and the Republic of Kosovo.