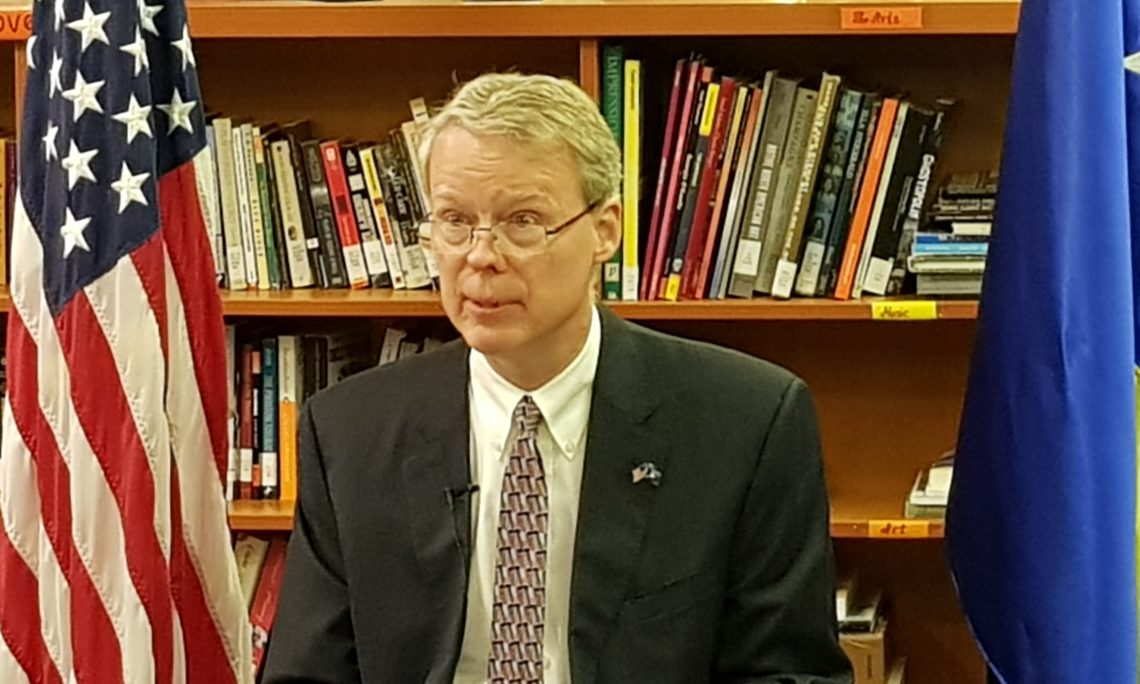 First, on behalf of the U.S. Embassy, I want to express my deepest condolences to the family of Mr. Ivanovic, whose murder yesterday is a tragedy for Kosovo.  I condemn this act in the strongest possible terms.  No one should take advantage of this crime for political ends.

I am here today to talk about justice.  I am here to talk about victims.  I am here to talk about Kosovo’s commitment to justice and its future as a democratic and European country.  That commitment is under grave threat from an initiative to undo or change the law authorizing the Special Court.  This effort is a terrible example of self-interest prevailing over the common good and over Kosovo’s interests as a state.  And let me be clear: MPs who support this initiative – and the politicians who lead it, despite their denials – will be subject to specific and harsh consequences should the initiative succeed.  They know this; we’ve told them.

But I want to talk to you, Kosovo citizens, about why the Special Court is important to Kosovo, and why the United States will do everything in its power to ensure the court is able to complete its mandate.

Kosovo fought a war in 1999, and we stood with you.  We stood with victims; we stood with justice.  No one will ever re-write the history books on the Federal Republic of Yugoslavia’s campaign of atrocities.  But the reality is that certain individuals who fought for the just cause of Kosovo’s freedom committed egregious crimes against others for which they must be held accountable.  And that’s what the Special Court is all about.

Victims whose cases may be prosecutable by the Special Court represent many ethnicities: Albanians, Serbs, Roma, and others.  All were Kosovo’s people.  All deserve equal treatment under law.  All have the same right to justice.  That’s why Kosovo set up this court.

The Special Court is deeply important to the United States.  We care about the Court because our intervention in 1999 was based on the idea that war crimes against anyone, anywhere, were an assault on international justice; we remember the suffering of a million Kosovars driven from their homes, camped out in the mountains or across the Macedonian border; we wanted to bring them justice.  American soldiers put their lives on the line to defend that principle, and we owe it to them to continue to defend it today.

We care because Kosovo cannot be a country in which impunity is the norm.  Accepting that reality would mean a return to Milosevic-era-style leadership, which a generation of Kosovo’s citizens fought to throw off.

We care about the Special Court because we want to see Kosovo take up its rightful place as a European country by joining NATO and the EU.  Changing or undoing the law on the Special Court and demonstrating contempt for Rule of Law would set Kosovo back years on its integration into European institutions.  If you want to join a club, you have to live by the club’s rules.  And one of the most important rules in the Euro-Atlantic club is Rule of Law.

I have no idea when indictments will be issued, or to whom; I don’t want to know.  But whenever that happens, I expect Kosovo to comply, fulfilling its promise to the international community.

We know that other justice mechanisms have come and gone.  No justice system is perfect, and some are more successful than others.  While the ICTY indicted and convicted a number of high-level leaders for crimes committed in Kosovo, there were many more who committed war crimes and who have not faced justice.

But, as Secretary of State Tillerson said on December 21, we remain fully committed to locating perpetrators of atrocities.  This certainly includes war criminals of all ethnicities living here or abroad who committed crimes in Kosovo.

The fact that some war criminals have escaped justice does not grant others impunity.  All victims deserve justice.  Kosovo needs to be willing to close this chapter in its history, even if it means holding some wartime leaders to account.

Some say, why not just have the trials here; we can do it ourselves.  Well, we have invested a lot in Kosovo’s justice system.  But it has not yet demonstrated itself capable of administering justice in high-profile cases, and witnesses continue to be subject to intimidation, threats, and violence.  An outside mechanism is still necessary.  Justice; justice for the victims has waited long enough.

Or do you want Kosovo to be a country that respects the rule of law, protects the rights of victims, and takes its rightful place as a respected member of the international community, allied with the United States of America?

That’s my vision for your country’s future.  If you share it, stand for justice.  Stand for victims.  Stand with me against this attempt to unravel Kosovo’s commitment to the Special Court.

There is nothing that I want more than to see Kosovo succeed as a just, recognized, prosperous country. I am here to work with you, and I hope you will work with me. Thank you very much.

Remarks about the Special Court