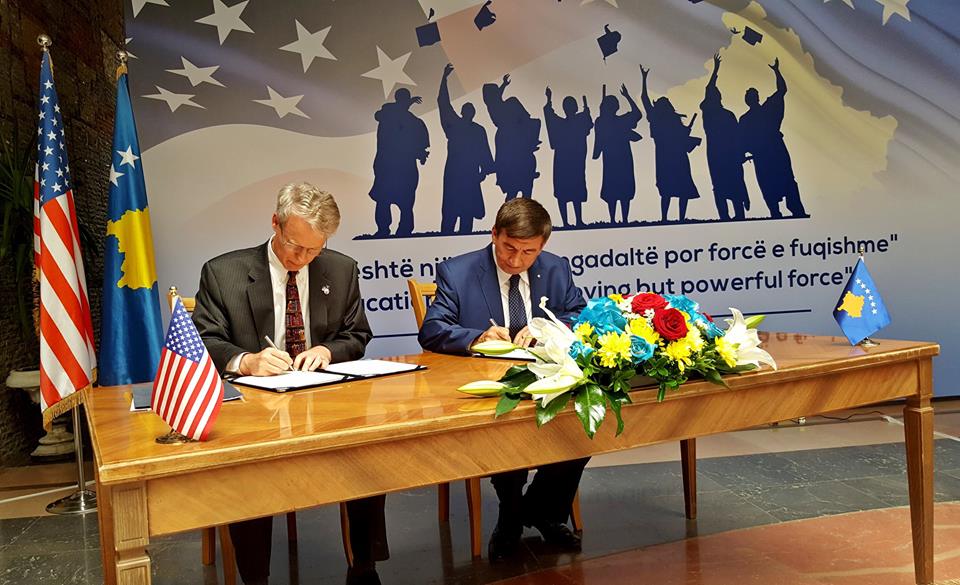 President, Prime Minister, Minister Bajrami, Government of Kosovo officials. Rectors and other University Officials. Fulbright Alumni. Distinguished Guests. It is with great pleasure that I join you here today for this momentous signing ceremony.

This year, we celebrate the 70th anniversary of the Fulbright program—proposed by U.S. Senator J. William Fulbright in 1945 and enacted by President Harry Truman the following year. What began as Senator Fulbright’s idea to use surplus war property to fund the “promotion of international goodwill through the exchange of students in the fields of education, culture and science” has expanded to become the most renowned and influential academic exchange program in the world. Since its inception, more than 360,000 grantees from the United States and across the world have participated in this flagship program.

Though the Fulbright program has existed in Kosovo only since 2009, we are extremely proud of the 84 students, scholars, researchers and specialists who are part of this esteemed group of Fulbright alumni — some of whom are with us today. I am proud of Kosovo’s Fulbrighters, who have returned to create positive change at home — in the government, in civil society and in academia. I am also heartened that the Fulbrighters from the United States have maintained their strong connections to Kosovo. Several of these U.S. fellows have returned to Kosovo after their grants, lending their expertise to new partners and strengthening their collaboration with old ones.

In more than thirty years in the Foreign Service, I have repeatedly seen the benefits that the Fulbright program provides to both American and foreign scholars. Four years ago, on the sixtieth anniversary of the U.S.-Germany Fulbright program, I had the opportunity to address some five hundred U.S. and German Fulbright participants from a range of decades. I talked about the benefits to both the visiting scholars and the host institutions. I noted that these benefits were always two-way, since the visiting scholars, upon return to their home country, brought back a renewed understanding of the host country, along with dozens of relationships with individual counterparts that would bear fruit for years to come.

This is my ambition of Fulbright Kosovo. That decades from now we will all look back on the hundreds of participants from both countries who not only gained significant new knowledge in their field of expertise, but also built even more enduring bridges of collaboration among professors, students, and others they encountered abroad.

Indeed, the best Fulbright programs around the world are truly collaborative, with involvement and investment coming from both the United States and the host government. Since the beginning of the Fulbright program in Kosovo, we have been honored to have the strong support and commitment of the Government of Kosovo and host institutions across the country. We are thus sharing a strong commitment to higher education as a means to achieve our common goals and to the value of educational exchanges to help develop a world-class higher education system in Kosovo. From our work on the Transformational Leadership Program and now to this significant expansion of the Fulbright Program, I especially want to thank Minister Bajrami and his team at the Ministry of Education, Science and Technology for their strong leadership and continuous collaboration.

But I do recognize that this collaboration and its funding both needs and has a “whole of government” approach. So I also want to thank the President, Prime Minister, Ministry of Finance, Ministry of Foreign Affairs, Ministry of European Integration, Ministry of Labor and Social Welfare and Ministry of Agriculture, Forestry, and Rural Development, as well as the Parliament who I hope will ratify this MOU next week. Indeed, the entire Government of Kosovo has made possible this important investment in the institutions and people who will build a brighter future for your country. While today’s ceremony marks the beginning of the next five years of the Fulbright program, I know that our joint investment and collaboration will continue to make a difference for decades to come.

Please accept my sincere congratulations on the new memorandum of understanding for the Fulbright Program in Kosovo. I would like to thank you, as well as Minister Bajrami and his team at the Ministry of Education, Science and Technology, for your strong commitment to this program.

Fulbright is the most widely recognized and prestigious international exchange program in the world, and we are proud to partner with your government to expand this program in Kosovo. Your government’s generous contribution will provide more opportunities for collaboration and coordination between students and scholars in our two countries.

We share your vision of a world-class higher education system in Kosovo and we believe the Fulbright Program will continue to be an effective tool as you make progress toward achieving that vision.

Thank you all for joining us. It is a real thrill for all of us at the U.S. Embassy to help write the next chapter in this vital exchange program between our two countries.