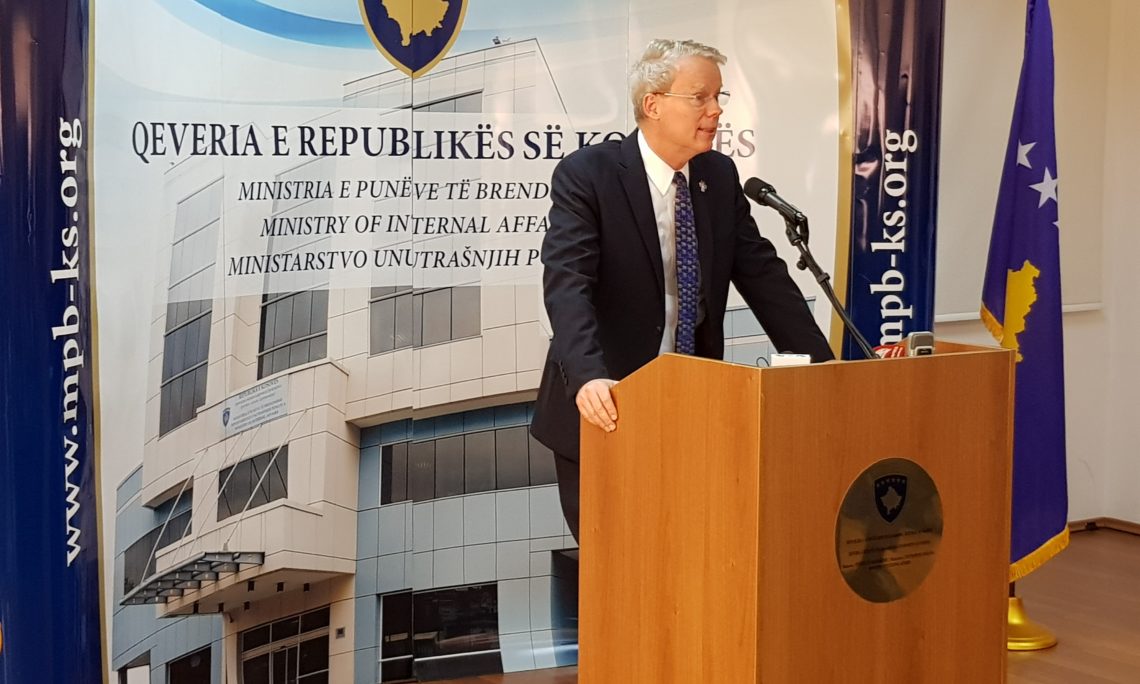 Welcome Minister Sefaj, Minister Hamza, Minister Hasani, distinguished guests: it is my great pleasure to be here today.  This donation event is the product of joint efforts between the Office of the Prime Minister; the Ministries of Internal Affairs, Finance, and Trade and Industry; the United States Export Control and Related Border Security Program (EXBS); and the United States Department of Energy (DOE).

The United States is dedicated to working with Kosovo to strengthen its borders.  Strong borders make it easy for legitimate travelers to cross borders, as well as prevent crime and corruption, and keep us safe from those who want to do us harm.

We are proud of our work to train officials in the most up-to-date methods, as well as our cooperation to ensure they have the equipment they need to conduct effective and efficient operations.

On display here today you will see a small example of our overall cooperation.

The interdiction and IT equipment will be used by the Border Police and Customs to enhance border control operations.  Last week, 10 officers were trained on the use of the Explosive and Narcotics Trace Detector.

The radiation detection equipment will be used by the Border Police in operations along the border and at border crossing points, by the Kosovo Agency for Radiation Safety and Nuclear Protection in response activities, and by the Public Order Police at national events.  Last week, 13 officers were trained on how to use the radiation detection vans and related equipment.

The IT upgrade for the National Center for Border Management will increase their ability to combat illicit cross-border trafficking, transnational crime, the proliferation of weapons of mass destruction, and terrorism by sharing information and providing high quality risk analysis and intelligence reports

The donation includes two additional vehicles that will be used by the Kosovo Agency for Radiation Safety and Nuclear Protection and the Ministry of Trade and Industry’s Strategic Trade Goods Department for inspection and outreach activities.

26 kilograms of marijuana seized at the Vermica border crossing point (BCP) in January,

40 kilograms of heroin discovered at the Kulla BCP in March,

19 kilograms of marijuana at the Pristina Inland Customs Terminal in April, and

9 kilograms of marijuana seized at the Vermica BCP in June.

We are proud of our partnership with the customs service and the border police.  We have been able to reach this high level of cooperation only because of these organizations’ strong commitment to professionalism and rule of law.  Thanks to you all.

Proud of our efforts w/ #GoK, @StateISN to strengthen border and internal security in #Kosovo. Today’s donation is a small part of our work! pic.twitter.com/UMjvQsna38