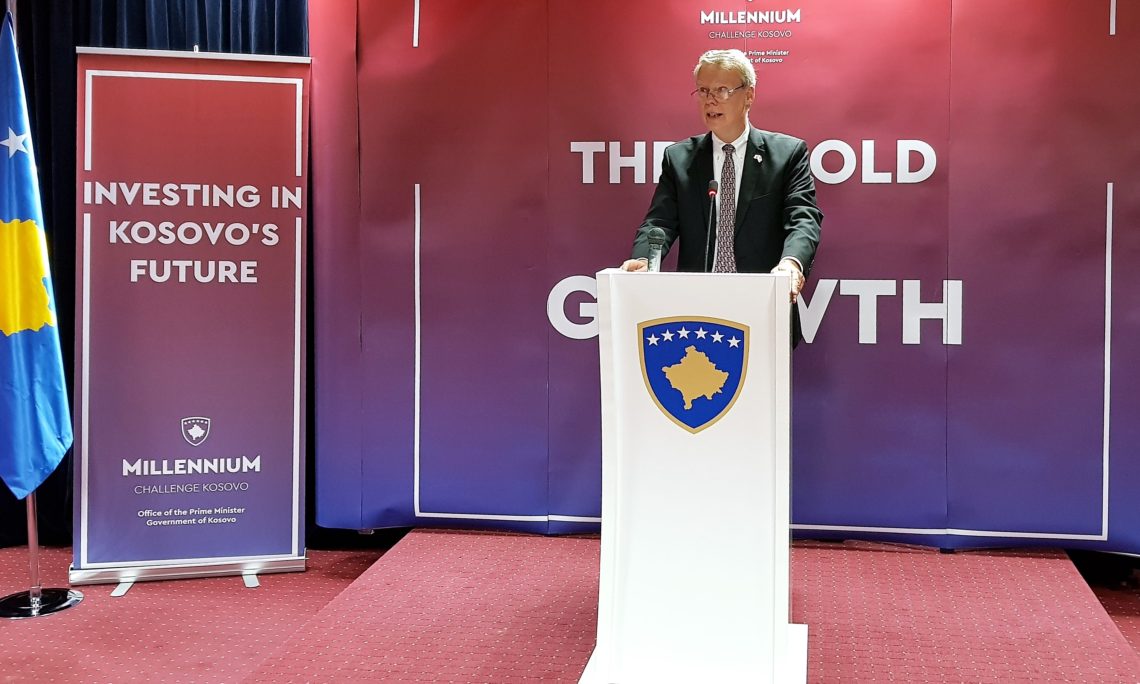 Good evening everyone, President Thaci, Prime Minister Haradinaj, Ministers, diplomatic colleagues, Petrit.  I’m really excited to be here with all of you tonight to celebrate the signing of the MCC Threshold Program for Kosovo last month.  As President Thaci said, he was there, along with MCC senior leadership, Congressman Engel, USAID Mission Director Jim Hope, Petrit, along with so many others who have nurtured the very special relationship between our two countries.

That ceremony was an extraordinary moment in the U.S.-Kosovo partnership, and an event that evoked a tremendous degree of pride and optimism for all of us here this evening.

By the way, the MCC signing took place on Capitol Hill. From my understanding it is the first time that has happened. That is yet again emblematic of what the President mentioned a few minutes ago about the deep, bipartisan support in the United States for Kosovo.

It wasn’t so long ago that this all seemed like a long shot, and now here we are poised to begin implementing a program that has the power to effect real change for all of Kosovo’s citizens.

As I’ve noted before, $49 million is one of the largest Threshold grants ever approved by the MCC, and it is far and away the largest on a per capita basis.  And with it comes a huge responsibility for Kosovo’s new government to implement the program with efficiency, with transparency, and of course with results.

I know that the collaboration and cooperation between the MCC Kosovo team and the MCC headquarters of Washington has been outstanding, and that’s even more important now.  Like all great endeavors, the success of the Threshold will ultimately be measured in the difference made in real people’s lives.

As many of you know, the MCC identifies the areas in partner countries that are the greatest impediments to economic growth and development.  It’s hard to think of two more critical areas of development in Kosovo than energy efficiency and transparent governance.  I’ve said many times before that Kosovo’s economy depends on a secure energy supply and a diversified energy market.  And of course, inclusive, accountable, and transparent governance based on the rule of law is essential to Kosovo’s Euro-Atlantic future.

Fighting corruption and fostering economic growth have been at the top of my list since I arrived here and I think we’re poised to take a real big step forward now.

We’ve already built solid partnerships in both of these areas, with the KJC and the Ministry of Justice and courts around the country and of course with the many critical entities that operate, distribute and regulate Kosovo’s energy supply.  So I think our partnership is well placed to intensify this collaboration, and Prime Minister Haradinaj, we look forward to working with you and your team as we hit the ground running on implementation.

Everyone here has an important part to play in what comes next, in working through the opportunities and challenges that implementation will bring, and in clearly articulating to Kosovo’s citizens what the MCC Threshold Program means for them.

I’m proud to be here with you as we celebrate this great milestone this evening, but then we need to get back to work.  We need to focus on solid project designs, transparent and competitive procurement tenders, and effective implementation with the same dedication and collaborative spirit that brought us so far in the MCC program.

I thank all of you for your hard work to get here today, many contributed: Petrit and his whole team at MCCK; Mike de la Rosa at USAID; our colleagues at the UN Development Program; and too many others to keep naming. Congratulations on this remarkable and transformational achievement.  Now let’s get to work on next steps to make a positive difference for the lives of the citizens of Kosovo. Thank you all very much.