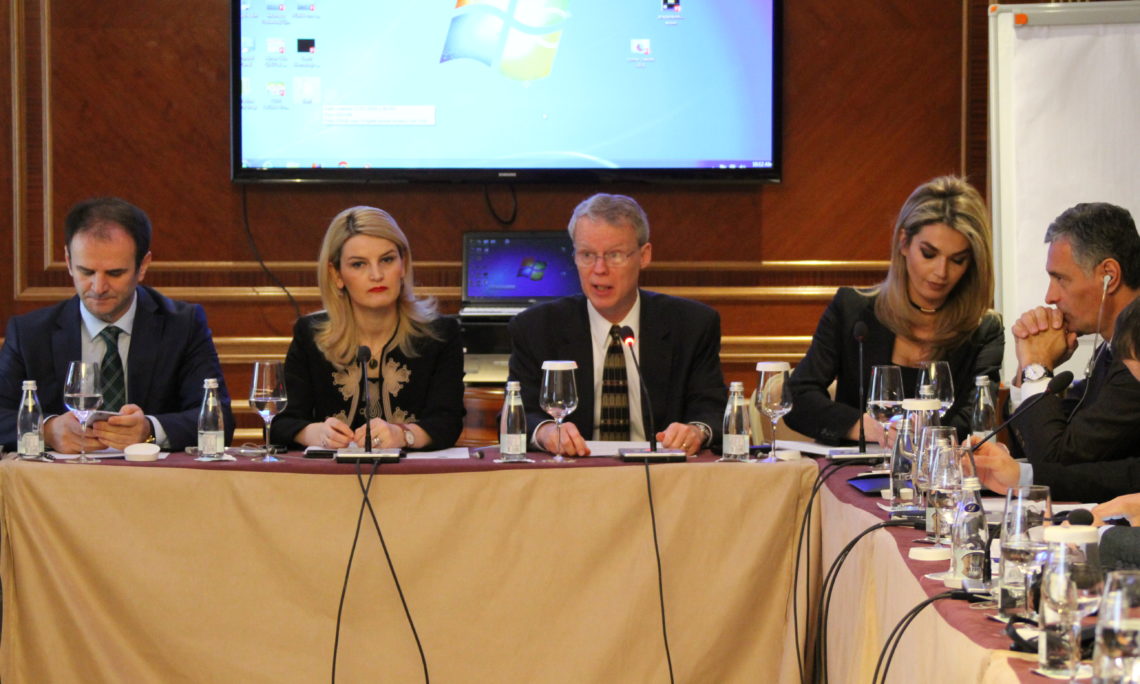 Ambassador Delawie’s remarks at the launch of Law on Office of Disciplinary Conduct, December 14, 2016

I am here today to support the Ministry of Justice’s proposal for a new Law on the Office of Disciplinary Conduct.  Minister Hoxha has taken some much-needed positive steps to combat corruption and impunity in Kosovo in the last several months.  I believe that the launch of this draft law for public comment is another step in the right direction.  This draft law will hold those in the justice system properly accountable for any improper actions.

When I came to Kosovo, it was with a clear message that Kosovo needed to be more aggressive in fighting corruption.  Many of you have heard me say time and time again that corruption holds Kosovo back.

It prevents investment and development of the economy, it destroys the hope of young people, and it erodes the public’s confidence in the government. One of the focal points for that loss of confidence is in the judiciary.

For several years now, the public’s perception of judges and prosecutors is that they are subject to political influence and that they lack accountability.  The public is consistently unsatisfied with their performance.  I am not saying that the public’s perception is entirely correct, but when you look at the current state of the system in place to hold judges and prosecutors accountable for misconduct, it’s not difficult to see how the public might feel that way.

Accountability for judges and prosecutors is fundamentally important to implementing the rule of law.  An effective disciplinary system is the key to establishing that accountability.  We are not talking about crimes; we are talking about actions that are ethical violations or call into question the judgment or impartiality of a judge or prosecutor.

When they go unaddressed, a culture of impunity develops and violations become the norm.  The public begins to lose faith and trust in the system, because they know that something is just not right and nothing is being done about it.  Those feelings are in many respects far more damaging than crimes, because they lead to a sense of hopelessness and anger by citizens.

Right now the Office of Disciplinary Counsel conducts investigations into allegations of misconduct by judges and prosecutors and makes disciplinary recommendations to the Kosovo Prosecutorial and Judicial Councils.  ODC is the sole authority with the power to do this.  But there are clearly problems with the functioning of this office.  In fact, the most recent EU progress report notes that the performance of the ODC needs to improve, and it calls for the adoption of a new law to strengthen accountability.

I understand there have been several attempts in the last five years to reform this office with little success.

There simply must be a comprehensive law that outlines the functioning of this office, sets out clear rules of conduct for judges and prosecutors, and removes control of the office from the people it is meant to investigate.

Let me be clear, I am not saying that the majority of judges and prosecutors are engaged in misconduct, but it only takes one or two who act with impunity to seriously damage the integrity of the system and the public’s confidence in it.

Rest assured that the United States is committed to helping improve the functioning of this office and its professionalism with support from the Department of Justice and USAID.

Ultimately, the new law proposes an independent investigation of misconduct that will be adjudicated in accordance with international standards by those with the appropriate knowledge and experience.

I hope that you will take this opportunity to provide constructive comments about the proposed law with an eye towards reforming the functioning of this office.  The people of Kosovo deserve prosecutors and judges with integrity, professionalism and accountability.  Positive changes to the ODC law will help ensure that they get this.