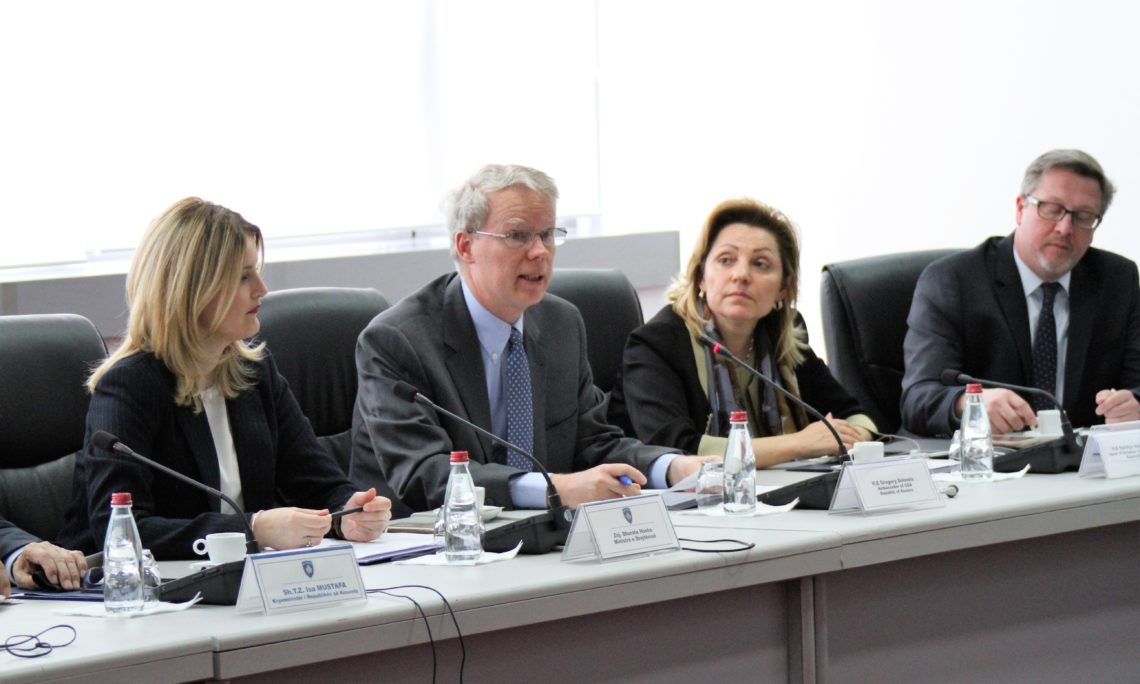 Ambassador Delawie’s Remarks at the Launch of the Functional Review of the Rule of Law Sector, April 19, 2017

Thank you very much for inviting me to participate in this launch of your functional review of the rule of law sector.  I know, Minister Hoxha, that you and your team have been working toward this event since you came into office, so I share your excitement that it is finally here.  This review should help you rationalize the rule of law system, define clear priorities for focus and reform in the justice system, eliminate redundancies, and make it more efficient and effective—something that will benefit all the people of Kosovo.

With its November decision, the government set you and all of the agencies that make up the steering committee a tremendous task.  Over the next year, you will study the legal framework and institutions that govern the rule of law sector, identify priorities for reform, and recommend (and, hopefully, implement) changes that will enhance the effectiveness, transparency, and accountability of the justice system.  This is an opportunity to reform the system, and to make changes that facilitate Kosovo’s eventual integration into European institutions.

No small feat, but an effort that should remedy the shortcomings we’ve identified in the system in the years since independence.

It is no exaggeration to say the success of this effort is crucial to the future of Kosovo. I should not let this moment pass without praising the Assembly yesterday for passing the Law on the Execution of Penal Sanctions, which is a key anti-corruption measure for Kosovo. That was a wonderful step, but it is a step in a multi-step process. A strong rule of law sector is essential for the people of Kosovo to have faith in their government and institutions.  It is essential for security and it is essential for economic growth.  By closing loopholes and remedying shortcomings, you will create a system that investors—foreign and domestic—can trust to guarantee their rights.  You will create a system that facilitates and supports the economy of Kosovo.

This is not a task the Ministry of Justice can accomplish alone.  The presence of all of my fellow speakers today is testimony to that.

While the Ministry plays a leading role in the rule of law sector, it is by far not the only player.  Friday I had coffee with the members of the Kosovo Judicial Council.  An independent institution, its active participation in this process will be vital for success.  Similarly, the Kosovo Prosecutorial Council and Chief State Prosecutor are independent and vital elements of the rule of law sector.  The fact is there are numerous organizations and individuals that have an important role to play in rule of law and its reform.  I’m pleased to see them represented on the functional review’s steering committee, and encourage them to play an active part in ensuring the success of this effort.

While this is an effort for Kosovo, and led by Kosovo institutions, I believe the international community also has an important contributory role to play.  We are committed to your success, and have contributed resources and expertise to help you.  I encourage you to take advantage of that, and come to us as you need our help and advice.  To that end, it is a positive sign that you have included representatives of international donor organizations that provide assistance to the functional review process on your steering committee.  I hope that they will be committed supporters of your reform effort as well.

Congratulations again on launching this effort.  I hope you receive thoughtful and useful comments on your proposal over the next two weeks.  My team and I are committed to help you in this effort, as we are in everything the institutions of Kosovo do to strengthen rule of law in Kosovo.

Thank you and good luck.