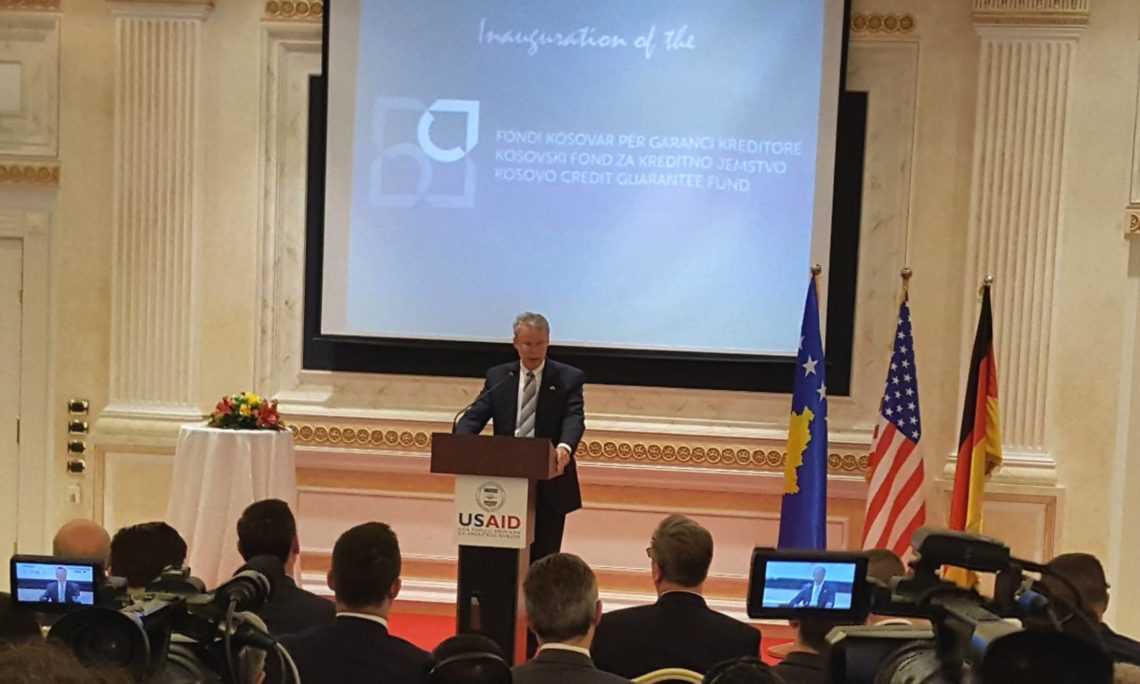 I cannot tell you all how excited I am to be here talking about an economic issue.  I was actually an economist before I was a diplomat, but I spend a lot of my time here in Kosovo on other issues – so it’s good for me to go home to economics.

The economic development narrative has already gotten off to a positive start in 2016.  Just over three weeks ago, the Stabilization and Association Agreement (SAA) between the European Union and Kosovo entered into force, heralding new trade and investment opportunities for this country.

We continue the story today by launching the Kosovo Credit Guarantee Fund.  This Fund is an important opportunity to address one of the key constraints to sustained economic growth in Kosovo — the lack of access to finance and credit for Kosovo’s businesses.

I’ve heard time and time again from farmers and business owners — including women and minorities — that accessing adequate financing is difficult.  Just several weeks ago I participated at the launch event of the AGRO Job Center at the Faculty of Agriculture – another USAID program – and one of the students spoke about the need for more jobs for young graduates.

But the creation of new jobs is driven by economic growth, and ultimately, by the private sector’s ability to obtain the necessary bank financing.

As President Obama has said “the economy in the U.S. is driven by small and medium-sized businesses.  They create much of the economy’s wealth and much of its jobs.”  This is true for Kosovo as well, which demonstrates how important it is to empower small and medium enterprises that provide Kosovo with a solid economic foundation for prosperity and growth.

This is why the Fund is such an important milestone in Kosovo’s development.   It will help small and medium enterprises obtain much-needed financing from financial institutions.

Most importantly, we expect the Fund will facilitate some $400 million in increased lending and hopefully some 20,000 new jobs over the next 6 years.

When more people are working, families and communities do better, increasing tax revenues for Kosovo.  And as businesses expand and new market opportunities are developed, exports will grow.

In few minutes we’ll have a video that shows how the Fund will work and most importantly, how businesses seeking financing will be able to have access to it.

Today’s event demonstrates the United States’ and other partner donors’ commitment to the continuing development of sustainable business growth and employment. Economic growth is not inevitable.  It requires lots of perseverance and hard work — and those in the room today are among those leading the charge here in Kosovo.

Launching the Kosovo Credit Guarantee Fund was helped by the strong support and leadership of the Prime Minister and the Minister of Trade and Industry, who sponsored the creation of the law.  I would also like to acknowledge the leadership of the Speaker of the Assembly, and the Chair of the Assembly Economic Development Committee, who proactively guided the law through for a timely passage.  Finally, I would like to thank the Central Bank Governor who has been critical in setting up the facility and is a true partner for us.

The Speaker mentioned how this was one of the first issues he addressed in his new job well over a year ago, which shows how much effort it took to get to where we are today.  I mentioned several key individuals, but they are all backed up by dozens and dozens others: members of the Parliament, banking and financial institutions’ people, government bureaucrats, diplomats, development agencies workers… lots of people.  It required a lot of efforts to get to where we are today.  This has been a terrific team effort.  And because of all our combined efforts in making the Kosovo Credit Guarantee Fund a reality, thousands of Kosovo citizens will be able to benefit for years to come.

Thank you all very much.