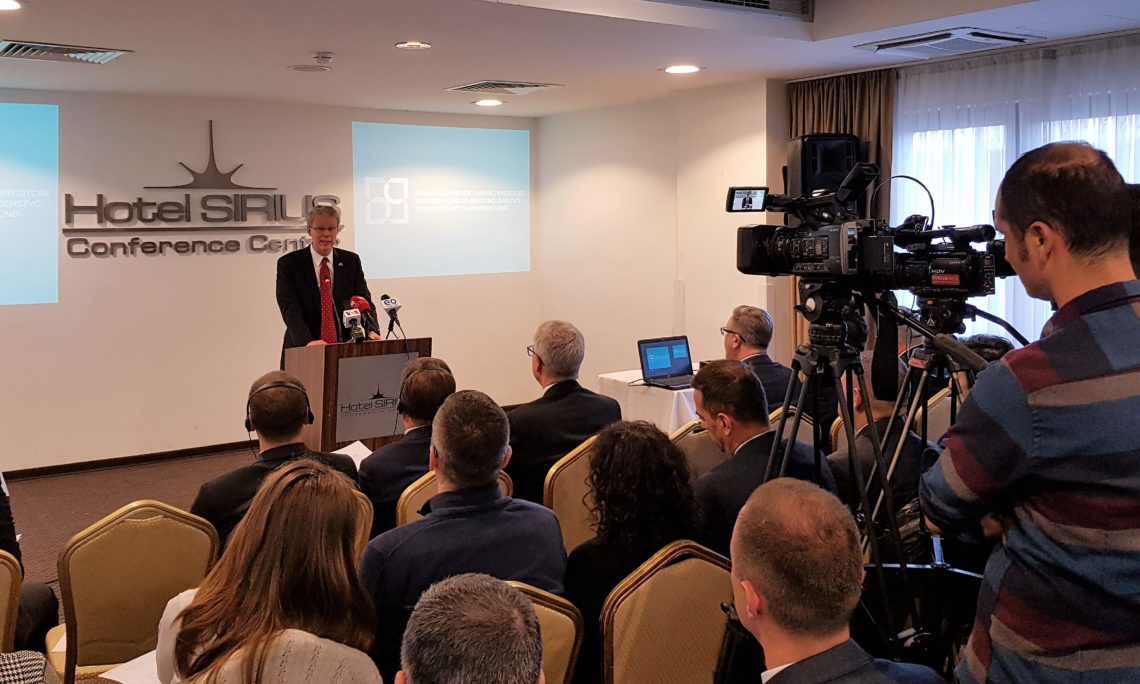 Today, the Fund receives a big boost from our friends at the Swedish International Development Cooperation Agency, who will sign up to guarantee €10 million euros in KCGF loans.  This is a critical contribution that will help ensure the resilience and the sustainability of the Fund.  Sweden was an early supporter of this credit initiative, and Mr. Wollter, thank you for reaffirming that commitment today.

It doesn’t feel like that long, but it was more than a year and a half ago that we and the Government of Kosovo and the Central Bank gathered to launch this Fund, opening up crucial new avenues of credit to small businesses all over Kosovo, and removing one of the most persistent, intractable constraints to their growth – a lack of access to credit.

We spoke at the time of our incredibly high aspirations for this project, and it’s been amazing to watch its early success this past year.  Since September 2016, the Fund has distributed 677 loans totaling 26 million euro.  And 90% of Kosovo’s banking sector is now participating which is incredible.  What’s more, a third of the loans have gone to small and medium sized enterprises in key sectors such as manufacturing and agriculture, boosting both production and job growth.

Data worldwide has shown that small and medium-sized enterprises are a major generator of jobs.  And employment opportunities in Kosovo are vital for the economy and its people.

This is what makes the fund more than the sum of its parts.  It’s not only stimulating lending and spurring the growth of individual businesses.  It’s propelling industries forward and contributing to the structural shift in Kosovo’s economy from consumption to production and exports, creating new marketplaces for Kosovo’s goods and new worlds of economic opportunities for her citizens.

Because the more that credit is available, the more that opportunity can reach those who have traditionally been the most underserved – and as is so often the case, that’s especially true for women.  Fewer than 10% of Kosovo’s businesses are women-led or women-owned, and only 3% of all loans go to women.  This has to change!  We are doing our part by helping to make credit more accessible, removing one of the biggest impediments to women taking their place in Kosovo’s private sector.

It’s about financial inclusion at the end of the day, and as the Indonesian economist and Finance Minister Mulyani Indrawati (MUHL-yahn-ee inn-druh-WAT-ee) has said: “Financial inclusion matters not only because it promotes growth, but because it helps ensure prosperity is widely shared. Access to financial services plays a critical role in lifting people out of poverty, in empowering women, and in helping governments deliver services to their people.”

This whole effort began as a collaborative initiative on the part of the donor community; that partnership remains strong.  In fact, I understand that just earlier this morning the German Development Bank KfW also signed an agreement to commit €7 million euros to the Fund’s capitalization – another invaluable contribution.  Together with our fellow donors, the Central Bank of Kosovo and our partners in government, we’re working together to unleash Kosovo’s private sector.

Day after day in Kosovo I meet young entrepreneurs and business owners who just need a level playing field and that first, critical jump start to spur them on.  Today, with the contributions from Sweden and Germany, many more jump starts will be realized.  It’s a great day for the Kosovo Credit Guarantee Fund, and for all those ready to make their mark on Kosovo’s economy and I guarantee you this is not gibberish.

I thank you all for being here, and look forward to many more good days for Kosovo’s small businesses and entrepreneurs.