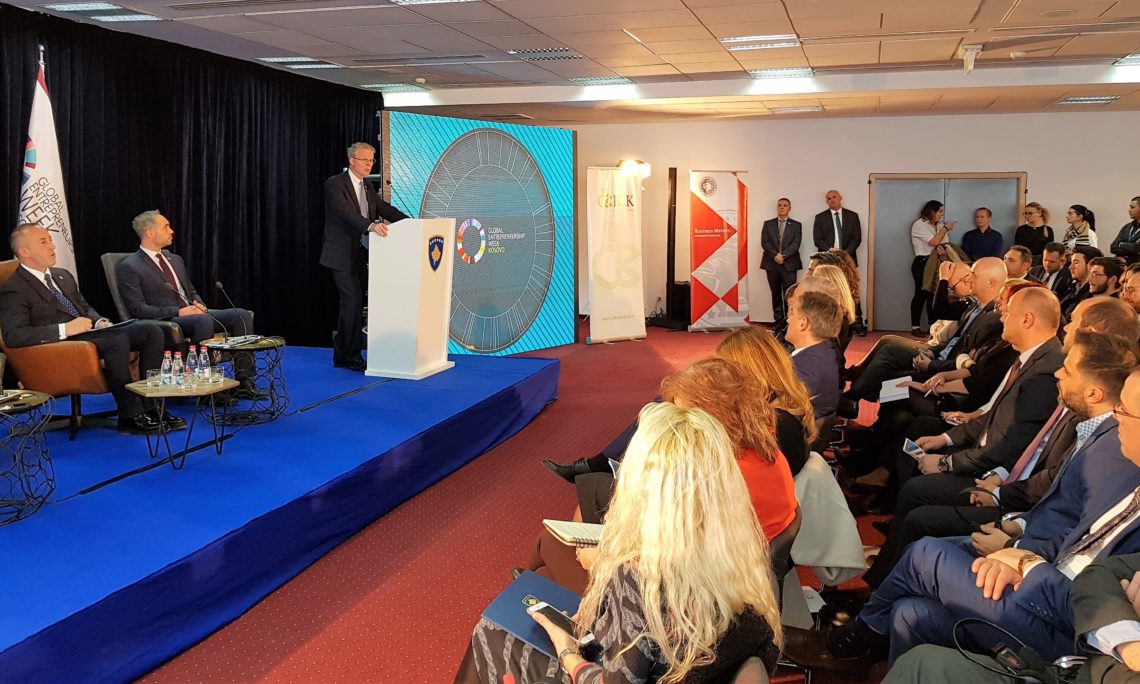 Good morning and welcome to Global Entrepreneurship Week.  Prime Minister Haradinaj, honored guests, entrepreneurs, it’s a pleasure to be here, and I want to thank the Innovation Center of Kosovo for making this possible.  I was here last year and it’s always great to be part of events that celebrate Kosovo’s terrific entrepreneurs.

It seems that Entrepreneur Weeks coincide with the release of the World Bank’s annual Doing Business Report, and when I spoke to you a year ago, we were celebrating Kosovo’s progress moving up from the 64th place to the 60th place.  Well this year the progress has been astounding, as Kosovo has climbed an incredible 20 spots in the rankings to 40th overall, and is recognized as the most improved country in Europe.

The sheer scope of this improvement tells us that you’re on the right track as we continue to partner, tackling the systemic challenges facing Kosovo’s private sector.  Every day I spend here I see real examples of this improvement when I meet with small businesses and young entrepreneurs who have an impressive drive to grow and innovate and reach new markets.

We know it’s not really the ranking, the World Bank indicators or anything else that matters, it’s the improvements in the lives and livelihoods of Kosovo’s people, and it’s about the ongoing reforms that will lead to more transparent, more accountable, and more responsive governance for all of Kosovo’s citizens.

Over the past year, in partnership with the Government of Kosovo, we’ve taken big steps to foster private-sector led growth and to unleash the entrepreneurial spirit of Kosovo’s talented citizens.  For example, the Kosovo Credit Guarantee Fund supported by USAID continues to help small and medium companies that might otherwise be unable to access the capital they need to grow and survive.  It’s only been around since 2016 but it’s already made possible 577 loans worth $26 million, helping to create over 1,000 jobs.

The Government of Kosovo’s milestone bankruptcy reform has also been crucial in fostering a business-enabling environment that encourages new businesses to take necessary risks, without having to risk everything.  Similarly we’re encouraged by the judiciary’s efforts towards backlog reduction, and in ensuring more effective judicial decisions and enforcement of them.

Such measures matter, because Kosovo’s talented dreamers need to know that their government has their back.  We look to entrepreneurs for their ingenuity and determination, for their ability to create jobs, and for their vision of what Kosovo can achieve in the future.  In return for the courage it takes to put their ideas and their investments on the line, we owe them a business environment that gives them a fair chance at success, a private sector both bound and protected by the rule of law.

Progress has been made, but there’s still a lot of work to be done.  Economic growth in Kosovo is inextricably tied to fighting corruption, so it’s the responsibility of all citizens to call out and tackle corruption at every level, in every sector, anywhere it threatens to undermine the hard work of Kosovo’s people.  We know that even the perception of corruption can have a dampening effect.  So we have to do better on public procurement, construction permitting, land titling and so many other areas that impede economic growth and erode the public trust.

The business community has a huge role to play in this.  First of all, I encourage you to work together.  Call out corrupt practices wherever you see them.  Get involved with reform efforts and talk to civil society groups, and find a way to raise your voices.  As I’ve said before, corruption hides in the darkness, so shine a light on it.  And most importantly, lead by example: refuse special favors and deals that value connections over competence.  Merit matters, so prize it above all else.

We also need to do a better job increasing the economic participation of women and minorities in Kosovo’s economy.  Not just because it’s the right thing to do, but because Kosovo needs the contributions of all her citizens to truly prosper.  Initiatives like the Women’s Economic Forum are a good place to start, in helping women speak with a unified voice to affect change and level the economic playing field.

There are big challenges ahead.  But to those of you just starting out, just beginning to nurture a new idea or create a new product, keep at it.  I urge you to take risks, try new things, and don’t let the fear of failure hold you back.  Failures and setbacks after all are an intrinsic part of innovation – they’re how you get from your first idea to your best idea.  They are, as Henry Ford once said, “simply the opportunity to begin again.”

We applaud your perseverance and imagination.  Each of you, in your own way, is moving Kosovo forward.  Stay engaged with both the Government and your chambers of commerce.  We’ll continue to partner with the Government, civil society, and the private sector to help you achieve your dreams.

As I’ve said before, entrepreneurship is an expression of optimism.  It’s the belief that your ideas have value and that you can achieve them.  Looking around this room, I can’t help but be an optimist, too.

Thank you again, and congratulations to all of you.