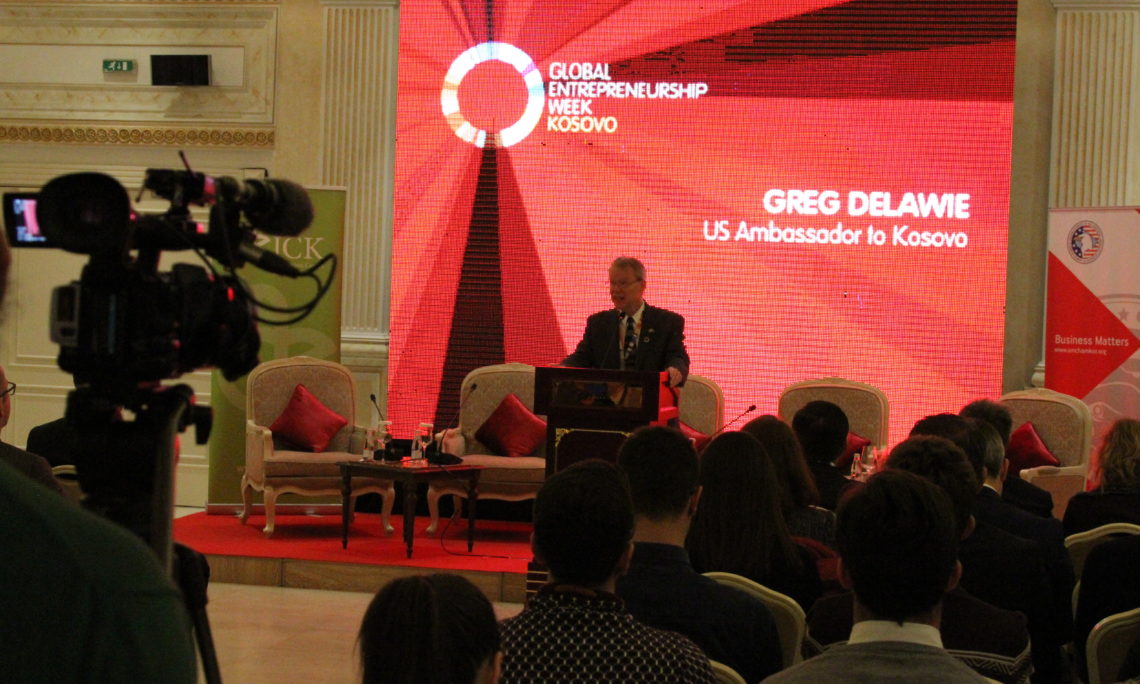 You know, not only did Kosovo move up in the rankings this year, thanks to the hard work of so many people, but it now ranks among the top 15 countries in the world for Starting a Business.  I mean, what could be better for Kosovo’s entrepreneurs than news like that?

One of the extraordinary things for me about serving here in Kosovo is that every day I get to see the innovation of Kosovo’s entrepreneurs and the determination of so many businessmen and women, who are driving Kosovo’s economic development.  There are so many examples, but the one that I think of often is that of Gjirafa and its founder Mërgim Cahani.  Only a few years ago, with just an idea for an Albanian language search engine, an incredible work ethic, and a tiny amount of support from USAID, Mërgim turned his idea into an information technology powerhouse.

Not only has he created jobs and attracted 2 million dollars in foreign investment, he’s come back to us with a proposal – and we’ve agreed to partner with him – on a way for him to give back to other IT sector entrepreneurs, through mentoring and through investment.  He knows how hard it is to get started when you’re young.  And he knows that by helping to build the regional internet economy, he can continue to grow his company, and create more opportunities in Kosovo.

I really enjoy visiting Gjirafa because I’m from California – the home of Silicon Valley and so many of the inventions that we use kind of every day – and being in Gjirafa is like going home for me where there’s a cargo container, there’s a conference room and there’s a hammock on top of the cargo container.  That’s definitely the California spirit.

Now, this all is the very definition of a virtuous circle and it’s indicative of the drive and resourcefulness that I see every day in Kosovo.

Of course it takes a lot more than resourcefulness – it takes a very special kind of courage to starting your own business.  To stand up and say: I have an idea.  I am willing to take a risk to make or do something.  And when you do that, what begins as one person’s vision can become something much more – it can become someone’s new job, or new opportunity, or new market to invest in.  Which is why it’s so important that we continue to do all we can to protect and promote the private sector.  That means continued progress on energy reform for example, developing youth workplace skills, and business-friendly government policies.

And of course, it means calling out and fighting corruption in every level of government, wherever we find it.  It means deciding we will not allow corruption to hold back Kosovo’s entrepreneurial spirit; we will not allow it to impede economic growth, or to dampen the ambitions and aspirations of citizens throughout Kosovo.

I’ve said before that the most successful entrepreneurs do more than dream and create, they are problem solvers and they are pragmatists.  We need them, and we owe it to them to give them the best tools for success and to create the best environment to nurture their ideas.

We’re proud to partner with you on this, and we’ll stay focused on activities and assistance that support entrepreneurship and innovation, including technical support for start-ups, because we know that this is the best way to achieve sustainable economic growth and job creation.

It also takes a real partnership between the private sector and government to make this work.  Which is why I’m so pleased at the early efforts of the Kosovo Credit Guarantee Fund.  In just a short time, the fund has already enabled banks to issue 42 loans totaling almost $3 million.  With just these initial loans, over 100 new jobs will be created.  And over the next five years, we expect similar loans will reach 400 million dollars and create 20,000 new jobs throughout Kosovo.

The Fund is critical to tackling one of the biggest obstacles facing small and medium-sized businesses in Kosovo – insufficient access to credit.

And you don’t need me to tell you what a game-changer that access to capital can be for a small business, particularly for young people and for women, who are more than ready to take their place in Kosovo’s economy.  But all too often, they find themselves cut off from the credit they need to get their start.

It’s not just the Fund, of course.  Since independence, Kosovo has made substantial progress in establishing and developing free market policies and legislation, and in improving its business climate.  The Government of Kosovo has also implemented a new fiscal package to spur economic development, attract foreign investment, and increase revenues.

So as I look around today, despite the problems and the challenges, I’m enthusiastic about the prospects for Kosovo’s entrepreneurs.  We have to be, because they will make the difference for so many families, communities and cities across Kosovo.

As President Obama said earlier this year: “When people can start their own businesses, it helps individuals and families succeed.  It can make whole communities more prosperous and more secure. It offers a positive path for young people seeking the chance to make something of themselves, and can empower people who have previously been locked out of the existing social order…..And it can create a culture where innovation and creativity are valued — where we don’t just look at the way things have always been, but rather we say, how could things be?  Why not?  Let’s make something new.”

Entrepreneurship is in many ways an expression of optimism, and so I encourage you to continue contributing to this self-starting culture, to keep asking yourselves: What can I do?  What kind of country do I want to build?  I applaud all of you whose guts, savvy, and imagination have created and built your businesses from the ground up.  You’re part of something bigger than yourselves, and you’re benefiting all of your fellow citizens.

I like to say that history is made by people with positive solutions. So keep working, keep thriving, and we’ll keep supporting your efforts every single day.