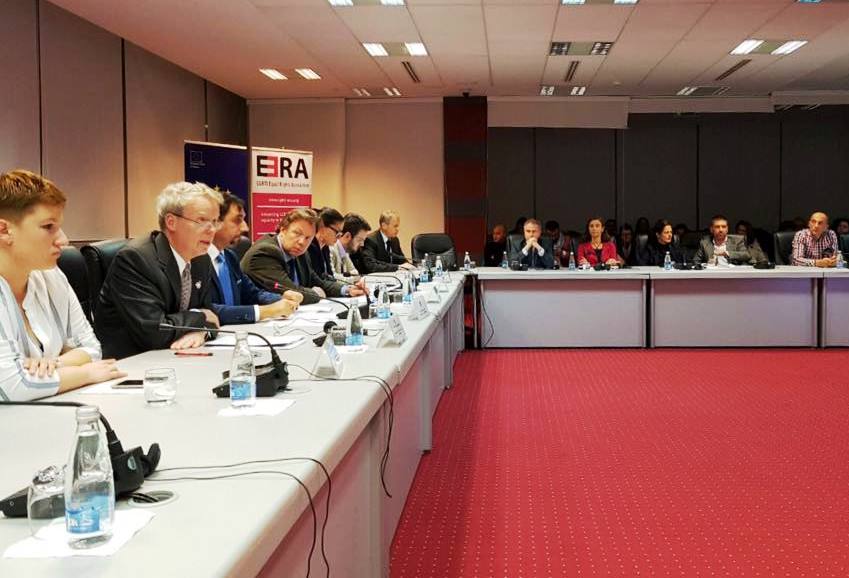 Thank you so much for inviting me to join you in promoting “Equal Rights for All!”  This event is a testament to the fact that the human rights of LGBTI persons are in fact expanding.

I hope our efforts over the coming days will increase cooperation to further LGBTI rights, as you have said Mr. Chairman, both in Kosovo and throughout the region.  During my first year here I have witnessed many positive steps from Kosovo’s political leaders on this very issue.

On August 18, President Thaci highlighted his support for LGBTI rights during his public event with Vice President Biden of the United States.  During the UN General Assembly meetings in New York last month, Prime Minister Mustafa met once again with Randy Berry, the United States Special Envoy for the Human Rights of LGBTI Persons, and reaffirmed that Kosovo will respect the rights of all with no differentiation.

We have also been pleased for several years now each May 17 to see Kosovo’s public celebrations of the International Day Against Homophobia, Transphobia and Biphobia.

High-level political leadership is critical so all Kosovo citizens can access civil rights protections.  Kosovo’s Constitution is particularly strong in its guarantees of human rights, but legal guarantees are meaningless without effective implementation.  Fortunately, I would like to note some real progress in this area as well.  On September 26, the Basic Court of Ferizaj convicted two men involved in an attack on two members of the LGBTI community.  Hopefully this successful prosecution will help send the message that attacks based upon hate will never be tolerated.

There is still much work to be done though.  In our annual human rights report the American Embassy notes that several laws remain unimplemented, and we continue to find discriminatory practices in education, employment, housing, and medical care.  A recent USAID survey found that 81 percent of respondents from Kosovo’s LGBTI community said they have been exposed to psychological or physical abuse due to their sexual orientation or gender identity – the highest percentage in the Balkans.

We are hopeful that the Advisory and Coordination Group, which is coordinated by your office, Mr. Chairman, and Kosovo’s LGBTI community, will soon complete its Action Plan for LGBTI rights.  This plan will help all ministries effectively engage on the issue.  It will enable police and prosecutors to continue their efforts to work sensitively on hate-crimes cases.  It will help health care workers understand the community’s needs, and encourage educators to adopt curricula that respect LGBTI persons so Kosovo’s lesbian, gay, bi-sexual, transgendered, and intersex students feel welcome in the classroom.

President Obama has lamented that too often LGBTI individuals are forced to conceal or deny who they are for fear of persecution, and that “all nations and communities can, and must, do better.”  What this means is governments need to take a stand for what’s right to help shape public opinion.  By USAID co-sponsoring with the Governments of Kosovo, Germany, and the European Union, this inclusive forum to promote LGBTI rights, I believe we are doing just that.

As Secretary of State Kerry has said, we have a moral obligation to speak out against the persecution and marginalization of LGBTI persons.  It is our moral obligation to promote fair and tolerant societies.  It is the right thing to do and it is a strategic necessity.  Greater protection of human rights leads to greater stability, which promotes prosperity, tolerance, and inclusivity.

This is not an easy process for any society, including mine, but in this process in the U.S. we learned that to succeed, the government and their people must work together.  In the United States this evolution lead to our Supreme Court’s ruling in 2015, ensuring the right to marriage equality.  In responding to the decision, President Obama commented that dedicated citizens are the foundation of successful efforts; a vindication of the belief that ordinary people can do extraordinary things.  Harvey Milk – an icon of the American LGBTI movement — famously said that; “rights are won only by those who make their voices heard.”  That is why I am so pleased USAID has been able to support all three of Kosovo’s LGBTI NGOs — CEL, CSGD, and Qesh — to build awareness, train activists, and fight discrimination.

Hvala mnogo and faleminderit shume. Thank you very much.