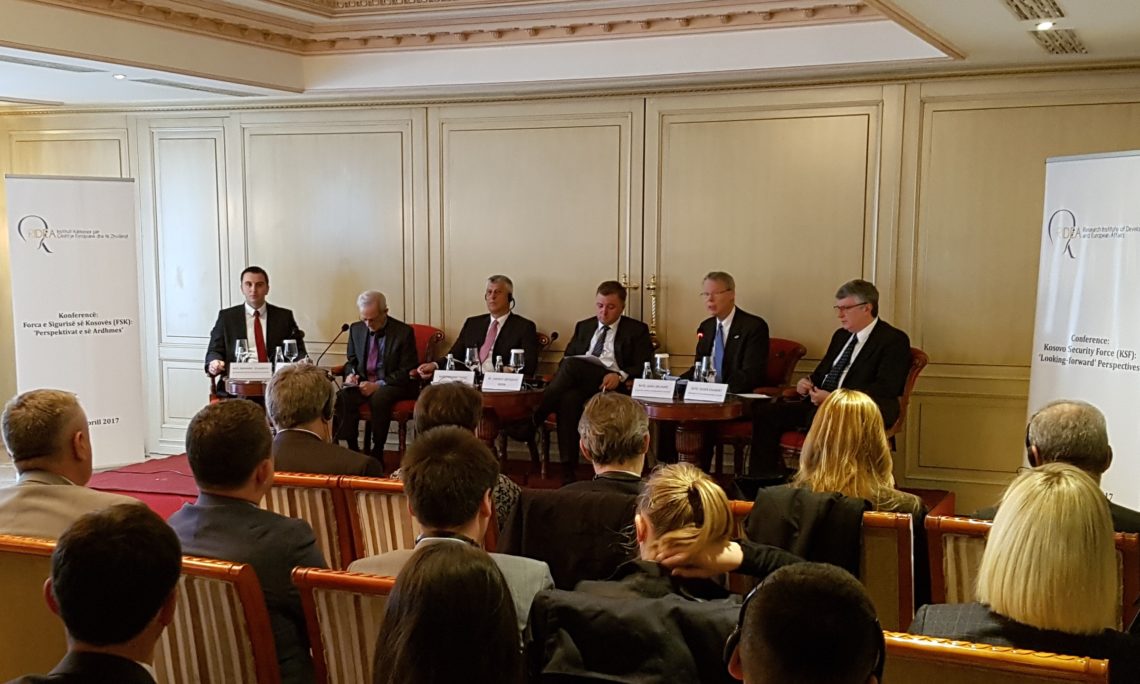 Miremengjes, dobro jutro, good morning everyone. Mr. President, Ambassador Chabert, diplomatic colleagues, General Rama, especially my counterpart from Washington D.C. Ambassador Citaku, Deputy Prime Minister, Dan- it is great to be here and Professor Grajcevci, thank you very much for organizing this conference and for inviting me to participate. And especially for starting your remarks with a quote from George Washington.

The United States has been deeply involved from the beginning in the creation and the development of the Kosovo Security Force, and we have a strong shared interest – with President Thaci, the government, and the people of Kosovo – in the KSF.

As Kosovo’s strategic partner, we believe the United States continues to have a very important role to play in advancing Kosovo’s security and national development.  The United States is currently the largest contributor of troops to KFOR, and we remain a strong advocate for Kosovo in NATO and in the UN Security Council.

I hope that most Kosovo citizens agree that my country has earned some credibility for our strong support of Kosovo, and in particular for its defense and security.  I am proud of what Kosovo and the United States have achieved together in building the Kosovo Security Force to its current high level of professionalism.  The KSF is respected inside Kosovo, in the region, and in Euro-Atlantic institutions.

I would argue that it remains very important for both our countries to have a shared approach on the continuing evolution and development of the KSF toward its eventual transformation into the Kosovo Armed Forces.

I know, because he has told me so, that President Thaci also shares the view that the U.S.-Kosovo partnership is critical to Kosovo’s defense institution-building.

Defense experts know how closely our advisors worked with your planners on the Strategic Security Sector Review plan, the SSSR, which provides a plan for Kosovo to develop its own Kosovo Armed Forces by constitutional amendment, and a ten year plan to build the appropriate capabilities with the support of the United States and other partners.

The United States remains fully committed to that roadmap, which we see as essential for Kosovo’s security in the long term.

As I said publically last October at the NATO Rose-Roth Seminar in this very hotel, as a practical matter, Kosovo needs a legitimate capability to defend itself before KFOR can consider leaving.

We understand that, in the long term, Kosovo has a genuine need for a legitimate self-defense capability, and we certainly support Kosovo getting it.

Why do we keep talking then about constitutional change?

I believe that the security partnership between the United States and Kosovo is built on a foundation of transparency, mutual trust, and our shared conviction that the Republic of Kosovo will be a sovereign, democratic, multi-ethnic state on the road to full membership in the Euro-Atlantic institutions.

So, for one thing, departing from our agreed SSSR roadmap – which very clearly called for a constitutional amendment — would be an unexpected change in plans.

But beyond that, we are concerned that real progress toward an effective army is not achieved just by a piece of legislation.  Kosovo’s future armed forces will have to be built up over time with the help of key partners such as the United States and NATO Allies.  Proclaiming an army in law does not create one in reality.

As Kosovo’s friend and partner, it is important to us that the process and mechanism of creating a legitimate military force for Kosovo be one that enhances rather than hinders Kosovo’s progress, international legitimacy and future access to military assistance.

Kosovo’s security comes from being woven into a larger fabric of international and Euro-Atlantic security institutions.

The United States and NATO Allies have an expectation that KSF transition to Kosovo Armed Forces will happen gradually, transparently, by means of a constitutional amendment that is the product of consultation and participation by all the citizens and communities of Kosovo.

We believe that Kosovo’s reputation, prospects and progress toward UN, EU and NATO membership would be damaged by any abrupt change to that plan.

We also believe that a matter as important as KSF transformation is to Kosovo’s future is something that must be the subject of a serious, sustained discussion and debate involving all of Kosovo’s citizens.

An issue as important as the establishment of a military needs to be handled in the right way—it will require dialogue, transparency, and a willingness to find compromise.

All of Kosovo’s citizens have a right to be part of this discussion, to have their voices be heard, and for their elected representatives to be afforded appropriate opportunities to participate.  That is what constitutional democracy should look like.

The KSF is currently comprised of approximately seven percent ethnic minorities.  This includes 47 Kosovo Serbs.  Although these numbers aren’t bad, there is more work to be done, especially increasing Kosovo Serb and other minority representation in the officer ranks.  I know the KSF is striving to increase these numbers and establish a more diverse security force and I’m very encouraged by the progress.  It’s important because the KSF will only be at its best when it draws upon the talents of all segments of Kosovo’s society

I’ve had several good conversations with President Thaci, Speaker Veseli, Prime Minister Mustafa and other political leaders on this topic recently, and I think we are making significant progress on identifying a path forward.

What we need is a pause in pursuing the current legislative agenda to leave time for an open debate on how to establish an armed force in a manner that is transparent, inclusive, and constitutional.

It will be a difficult process and I know that some naysayers have already doomed it to failure.  I don’t accept this fatalistic attitude.  Anything is possible when leaders sit down at the table and negotiate in good faith.  And I remain optimistic that the leaders of Kosovo will do what is right—that they will set aside any presumptions or prejudices—and come to an agreement that is in the best interests of the country.

We call on all elected leaders and all communities to be active participants in the conversation about KSF and Kosovo Armed Forces.  Now is the time for all of Kosovo’s citizens to participate in shaping the future of Kosovo’s security forces.   We do not expect the people of Kosovo to wait forever on this, nor do we believe any one party should have a veto.

And I want to be very clear that when I say this dialogue needs to be inclusive that my words aren’t misrepresented.  I’m not referring to negotiating with any other foreign state.  This is a sovereign decision that the people of Kosovo must make for themselves. Again, I believe that the Kosovo military force will only be at its best when it reflects society as a whole and draws upon the talents of all segments of that population. The United States is absolutely willing to work with Kosovo on making this a reality.

Question from audience: Mr. Ambassador, after you heard from Mr. Stojanovic what he said, are you now convinced that convincing the Serbians to vote for constitutional changes is an impossible mission and now you have to give the green light to Kosovo’s institutions to have an army with a law?

Ambassador Delawie: Thank you very much for the question. I’m not ready to give up today, it turns out. With all respect to the Deputy Prime Minister and others in the room, I think we need to have a longer conversation. It needs to be considered, people need to think about all the different ramifications for what this transformation would mean to them and they need to take time to work things out. And maybe you think it is just a diplomat trying to extend his ability to do his job and to work forever on something, but in fact, serious problems, serious concerns require serious conversation that cannot happen overnight. I’m convinced as I said in my initial remarks that if Kosovo’s leaders get together and talk about these serious issues in a serious way, negotiating as politicians do, I’m confident that they can get to a place where everyone has had a chance to make his point, and I hope we get to a place where Kosovo’s Security Force can transition according to the plan we have all worked into a Kosovo Armed Forces.

Question from audience: Thank you. Greetings to all participants. Greetings to the panel, too. I have a question for Mr. Delawie, U.S. Ambassador. By welcoming the readiness to exhaust every opportunity to talk to Srpska List in order to come to an end and make a decision that would be acceptable for all, my concrete question is: is there going to be a set time limit to talk to Srpska List? Because as one can see, this is going to be a very long process as they (SL) didn’t share even the smallest signal to show their readiness for a positive result at the end of the process. Therefore, if the Albanians, in this case Kosovo institutions have allowed, or simply – the President is also said to have written a letter to Assembly Speaker to postpone the proceeding of the matter to the Assembly. Is there a way to know if the Srpska List will have the time limits, how long will they have to give their opinion on this issue?

Ambassador Delawie: Thank you very much for the question, I appreciate it. I understand there is an interest in bringing this issue to a close. My view is that it is too soon to talk about time limits because we are just kicking off this process the President described a few minutes ago. If you establish a time limit in the beginning, you are dooming yourself to failure at the end, in my view. So let’s have a conversation, let’s have negotiations on this very important issue as Ambassador Chabert described and we will see how far we get. As I said, our view is that no one should have a veto on this issue. But I think there needs to be a discussion over a sustained period of time. Get all the issues on the table, talk about safeguards, things like that and then see if we can come to a conclusion. Thank you.