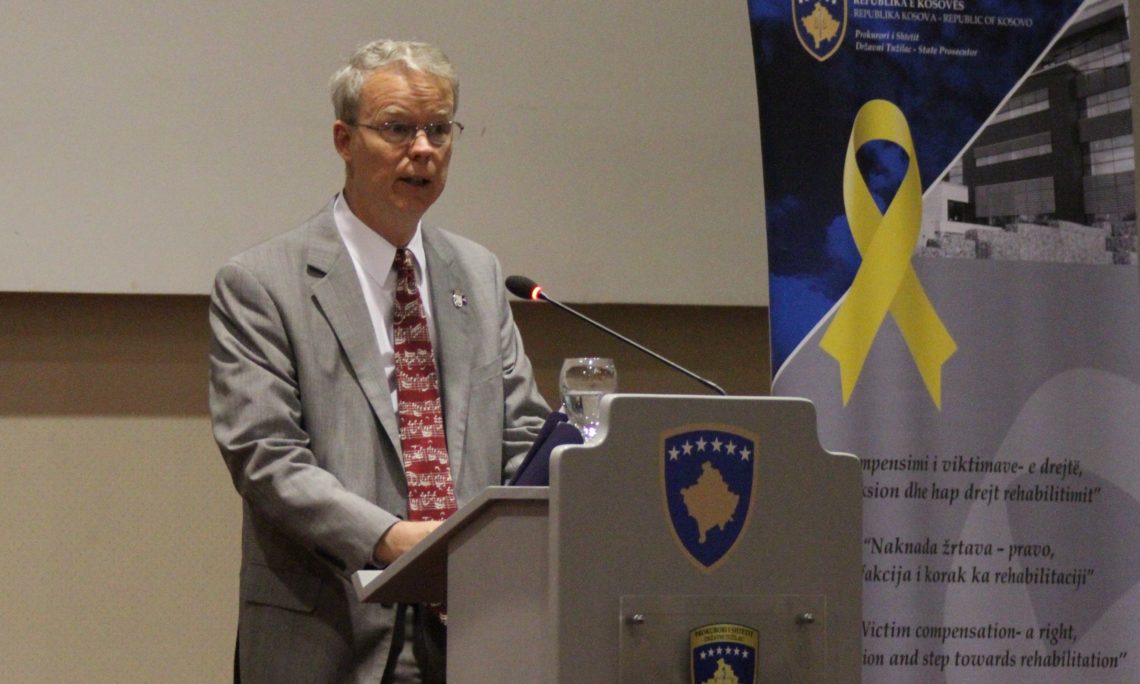 Good morning everybody.  Thank you, Chief State Prosecutor for hosting this event.

Mr. President, Minister, leaders of the Kosovo rule of law sector, diplomatic colleagues, it’s wonderful to be with you here today for this important event.

I am extremely proud that the U.S. Embassy has strongly supported this week since its inception eight years ago, and each year that I’ve spoken I have had the pleasure of highlighting the significant progress that Kosovo has made on crime victims’ rights.  As always, there is more work to do, but over the last several years Kosovo has shown a consistent dedication to improving its treatment of crime victims.

I am encouraged that Kosovo continues to build a robust victim advocate’s office, staffing it with professionals and providing them with the tools and the skills to help those seeking assistance.  These advocates are a source of critical support and guidance that help the victims of many crimes – be it domestic violence, trafficking, or rape – to navigate what can be a complex and frequently frustrating justice system.  This support is often an integral part of a victim’s successful recovery.

Kosovo has also become a leader in the region by passing a Victim Compensation Law, establishing a governing board, and just this year, providing it with the funding it needs to begin making payments.  Recently the Committee came together for the first time to review an application and ultimately decided to award compensation to a grieving family.  We have been approached by numerous colleagues in other countries in the region seeking advice and expertise on implementing similar laws and advocacy programs in those countries.

This year, the prosecutor’s office also took the important step of assigning specialized prosecutors to handle domestic violence cases. It’s a decision that acknowledges both the complexity of the relationships involved in these crimes and how pervasive they are.  We continue to struggle with this problem in the U.S. as well, and our President recently declared October as Domestic Violence Awareness Month.  In his remarks he noted that one in four women in the United States have suffered physical violence from an intimate partner and that domestic violence is the single leading cause of physical injury to women.  Those are staggering statistics.  It has taken us many years to understand and to begin to deal with this problem at home and I hope that sharing some of the experience and tools we have gained along the way will help Kosovo to face this challenge.

We have been proud to support Kosovo’s institutions and these programs since their inception, and we will continue to do so.  At times progress has been challenging, and it will require the continued support of the Government of Kosovo and rule of law institutions to move forward.  So I hope that every judge and prosecutor will take their legal obligations to victims seriously.  Making sure that perpetrators pay fines to the compensation fund or forfeit illegally obtained assets may not seem like much in the overall scheme of things.  But the financial support this could ultimately provide to a victim can mean the difference between a chance to start over and the feeling that they have been abandoned by society and victimized a second time.

This week, all of us pay tribute to crime victims and to those – including many of you – who dedicate their lives to helping them.  I particularly want to welcome my colleagues from San Francisco, who are here to talk with in the next couple of days.  Our shared challenge is to realize that justice isn’t served until victims’ rights and services are not just celebrated annually, but practiced every single day.