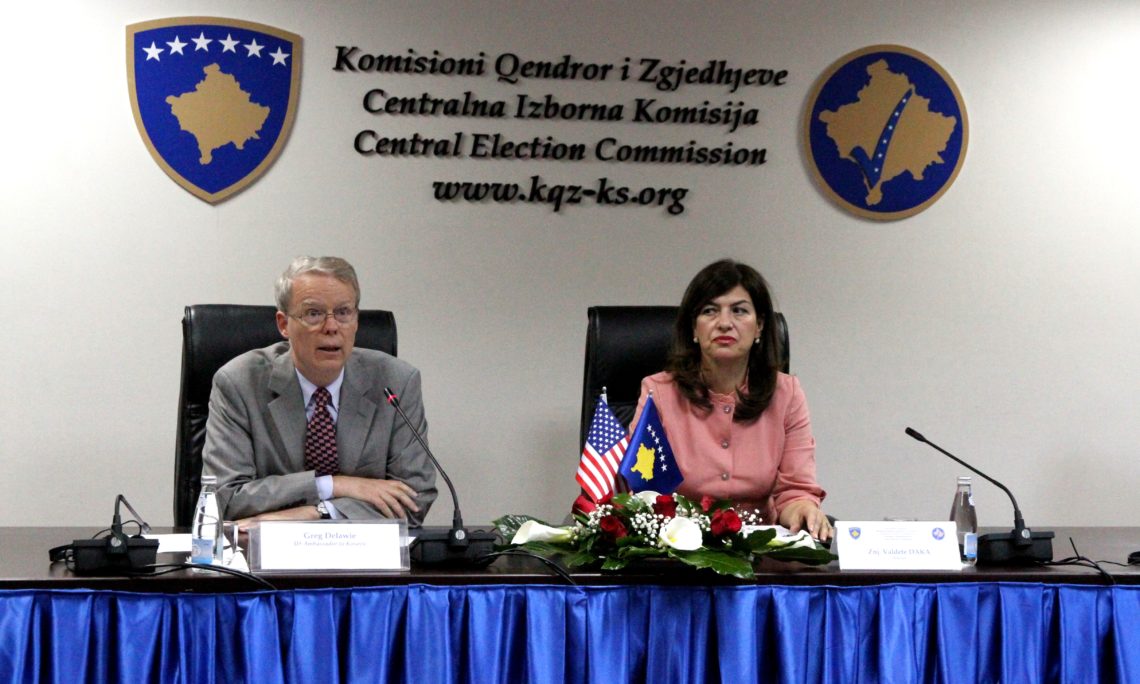 Ambassador Delawie’s Remarks to the Central Election Commission, May 19, 2017

Chairperson Daka and distinguished members of the Central Elections Commission, thank you for welcoming me here today.  I am delighted to have the opportunity to address your institution and to express our support for the key role you play in organizing elections.  This is no small task, but we are confident, as you proved in 2014, that the CEC is more than equal to this task.

As we Americans are fond of saying, “every vote counts,” so my number one message to Kosovo citizens is please get out and vote!  The greater the turn out, the greater the mandate the next government will have to chart your important course ahead.  The future of your country is in your hands, and June 11 is the day you get to have your say – this is particularly important for first-time voters.  So Hajde! Vote!  We are happy to see the CEC continuing to raise awareness among voters and educating them about the importance of their vote.

Because elections are absolutely vital to securing the bright future that all Kosovo citizens deserve, I am also calling on all politicians to pledge to keep the elections free of fraud and political violence.

Being free of fraud starts with clean candidates’ lists.  Any person tainted by corruption or other serious crimes has no place on candidates’ lists in my view.  Kosovo has many talented leaders that are not engaged in these activities and they deserve a chance.  So I strongly urge party leaders to scrub your lists and ask yourself if candidates really merit the public’s trust.  Are they the best you have to offer?

The Kosovo public and the international community also expect credible elections in which candidates, as well as the journalists who cover them, are free from intimidation.  Campaigns are about who has the best ideas.  They are about appealing to the highest aspirations of the people of Kosovo, to live in a peaceful and prosperous country and region.  Therefore, I call on all parties and political leaders to reject and condemn all forms of intimidation.

The CEC’s success is underpinned by the strong Election Task Force partnership this institution has with ECAP, police, prosecutors, and judges.  Therefore, I would like to join the Task Force’s call for voters to report any signs of irregularities.  We have seen in the past how electoral fraud can harm Kosovo, but your efforts in 2014 contributed to a fair process that I believe is every citizen’s fundamental right.  I am confident the CEC will do its utmost to ensure the integrity of the vote.

Because it is crucial that Kosovo continues to meet European standards in the conduct of elections, the U.S. Embassy will join other international organizations in deploying observer teams at polling sites throughout Kosovo.  We will be out in force on election day and my own embassy team will be supplemented by colleagues from other U.S. Embassies in the region.  Because we also believe public confidence in Kosovo’s election is crucial, USAID is working to fund a program with the Kosovo Democratic Institute, which, through the Democracy in Action coalition, will recruit, train, and deploy a cohort of 2,800 citizen monitors.

These citizen monitors will observe and record voter registration, voting, and ballot counting procedures in polling stations on Election Day, in addition to pre and post-election day observation.  Through USAID, we are also happy to continue to support our partner, International Foundation for Electoral Systems (IFES), to provide technical and advisory support to the Counting Results Center.  However, it is Kosovo citizens who are best positioned to report any irregularities.  So if you see something, please say something!

Finally, we endorse no party and no candidate.  We continue to work for an independent, democratic, prosperous Kosovo that is at peace with its neighbors.  Thank you again for your willingness to meet with us today.  I look forward to following your success and the fairest and freest election yet in Kosovo. Thank you very much.