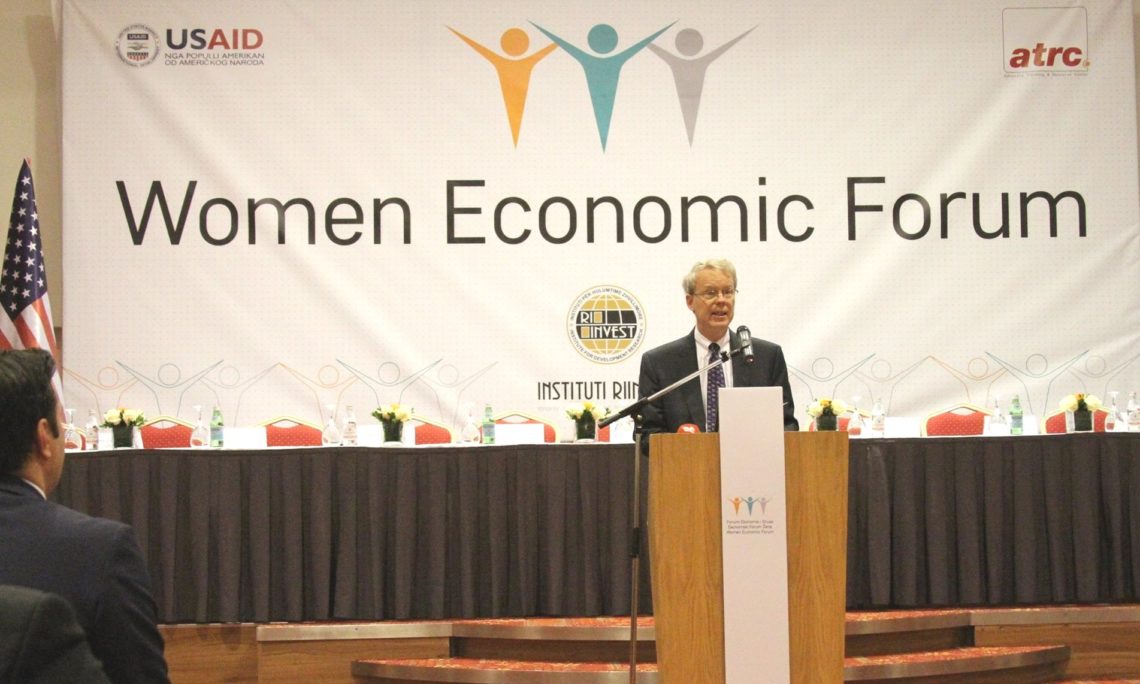 I’m very happy and proud to join you for such an important occasion. Thank you very much Lumir

I cannot think of a more vital issue than insuring that women and girls have access to the same rights, opportunities and protections as men.  And that they have the same ability to participate in and contribute to their country’s growth.

Many of you have spent years advocating for women’s rights in Kosovo, pushing for better representation in government, better access to health care and education, micro-financing to empower women entrepreneurs, and equal property rights. You have all been voices and agents for change.  What makes the Women’s Economic Forum so special, and so necessary, is how powerfully it will amplify your voices.  It will bring them together and deliver your messages with purpose, unity, and clarity, so that you cannot be ignored. And we’re rooting for you, because frankly there’s still a lot of work to be done.

Of course you know these challenges far better than I do.  There is still a very low participation rate of women in the economy, and far too few opportunities for women to own property or inherit wealth in their own names. Women still need much better access to credit to start small businesses, and young women need to know that no profession is off-limits to them, no matter how big they dream – whether it’s being the next leader in IT or engineering, or winning gold medals at the Olympics.

Failure to make more progress on these issues not only harms Kosovo’s women and girls, but also erodes the country’s overall economic development.  That’s why this issue is even bigger than women’s rights and inclusion – it’s fundamentally about how Kosovo chooses to grow its economy, build prosperity, and pass it on to the next generation. And the evidence around the world shows clearly that great participation by women in a country’s economy leads to greater prosperity, as well as stability.

I understand that one of your first undertakings will be to create a comprehensive Women’s Development Economic Agenda that you will present to the National Economic Development Council. I applaud that initiative and the United States will strengthen its partnership on these issues.  In fact I’m very proud that our own USAID development guidelines ensure that all economic growth activities include “prominent participation by women.”

I’ve had the chance to meet with many women business owners and entrepreneurs in Kosovo, many of whom have benefited from USG programs.  They are creating jobs and growth.  And they can do more. The WEF’s mission is vital because Kosovo simply cannot afford to falter on women’s inclusion in economic development. As Teuta Sahatqija former Chair of the Women Caucus at the Assembly of Kosovo, now Kosovo’s Consul General in New York, eloquently stated: “No society can be strong if 50% of the population is left out.  It’s like having two hands and you are only working with one.”

And of course she’s right.  Kosovo will have a much tougher path to achieving all of its objectives – including its ambitions for Euro-Atlantic integration – without utilizing the full potential of its entire citizenry.

I thank you all for your partnership, and for working hard every day on behalf of Kosovo’s women and girls and for your country’s best interests.  I’ll be watching the Forum’s progress closely.