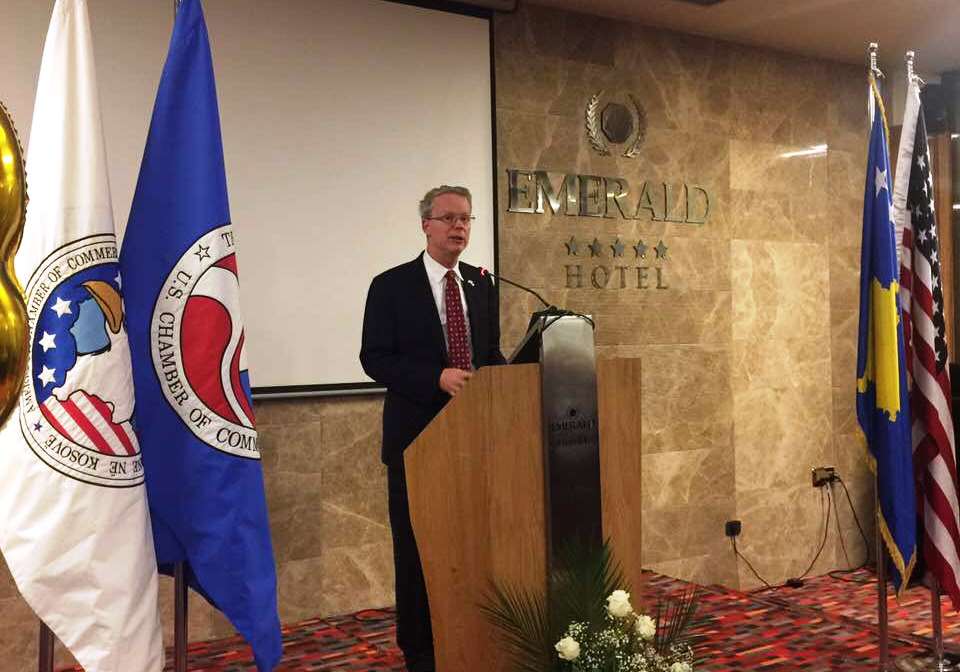 I would like to acknowledge the Government of Kosovo leaders, members of the AmCham Board of Governors, its Executive Director, its members, and honored guests.  Thank you for making the time to be here tonight as we celebrate 13 years of AmCham.

It is pretty remarkable to think you all have been embracing American business values since before Kosovo was an independent republic.  To me, that suggests AmCham’s members and founders understood that economic growth – and the businesses that contribute to that growth – play an essential role in this country’s development and its security.

Tonight, I would like to talk to you about how we can continue that legacy.  I want to challenge each of you to play a more active role in facilitating Kosovo’s greater integration into the global community and in increasing its security through economic development.

On the one hand, it’s important to recognize that Kosovo has made substantial progress in establishing and developing free market policies and legislation, and in improving its business climate.  These steps were recognized in the World Bank’s Doing Business 2017 report, in which Kosovo advanced four places in the rankings, from 64 to 60.  Kosovo got credit for improvements in several categories:  starting a business, tax compliance, and trading across borders.  I expect that some of you here tonight have experienced first-hand the benefits of this progress.

But there is another hand as well.  I have met with businesses across the country and heard about the challenges.  I have heard what local politicians, businesspeople, and average citizens think about the important issues of the day.  Interestingly, they don’t seem to care much about the issues that seem to dominate the political news in Pristina.  Instead, they care about things that affect their daily lives.  They care about unemployment; they care about insufficient economic growth; they care about education; and they care about corruption.

There is an old joke in the United States about the problem with the weather – everybody talks about it, but nobody does anything about it.  These issues, the ones that regular citizens and businesspeople care about, are not like the weather.  You can do something about them.  If you speak with a loud enough voice, speak together, and don’t be deterred when you hit a road block.

I would love to see the terrific members of the Amcham speaking with a louder voice about the issues that are holding back Kosovo’s economy.  Form a committee.  Pick three problems to focus on every year.  Meet government officials to discuss what needs to be done.  Talk about them in the press.  Talk about them at the Rotary Club.  Talk about them whenever and wherever you can.

Many of your businesses compete with each other.  But I bet there are several of these big issues that you can all agree on.

No Government cannot solve big economic problems without the active support of business.  Make suggestions that will make Kosovo a better place not just for your business, but for the sector writ-large.  Learn from those who have gone before you.  Read up on countries that have successfully transitioned their economies.  There are certainly others out there who have done a lot with a little, just look at Estonia – smaller than Kosovo, also with a Communist legacy.  Their economic transition was not easy but people and politicians came together to prioritize their future.  They set a framework that allowed businesses to succeed and they have gone further than anyone could have imagined.

Once you get some good ideas – get active.  Kosovo cannot and should not wait for the international community to fix its problems.  This country needs you a lot more than it needs foreigners like me.  It is incumbent on Kosovo’s citizens to take the lead on fixing Kosovo’s problems.

Help Kosovo become the kind of country you know it can be.