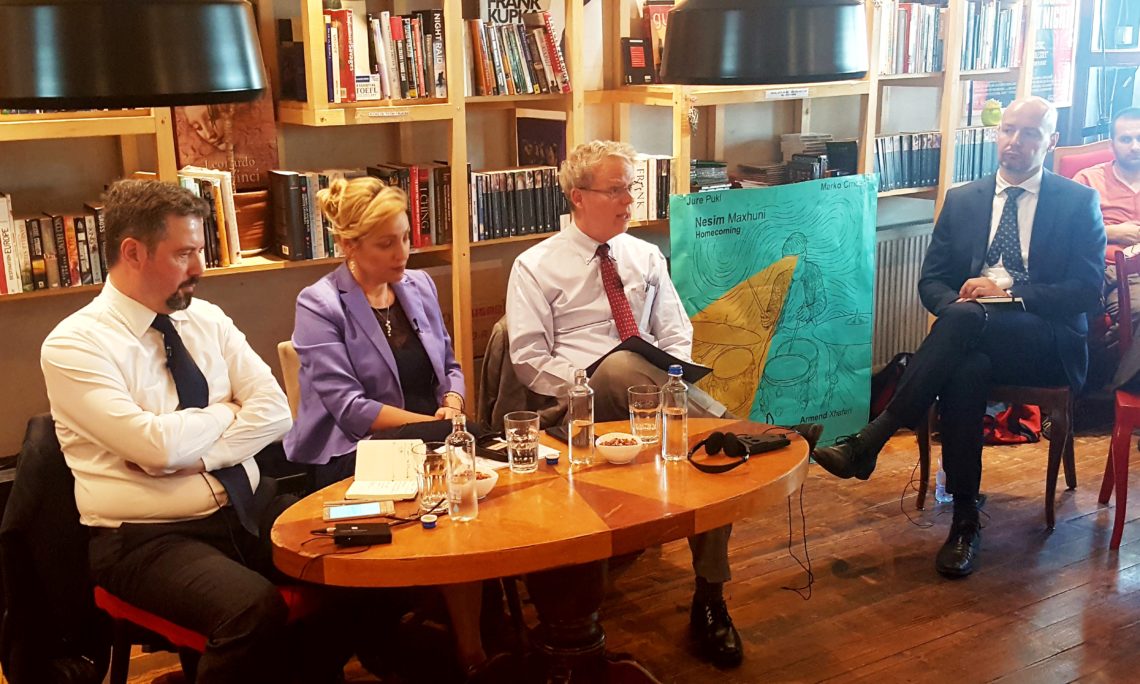 Thank you, Shpend and thank you to D4D for the opportunity to participate in this very interesting discussion.  Special Representative Apostolova, Mr. Bajrami, it’s a pleasure to be here with you.

I know it’s been a very busy past three weeks for all of us in Kosovo, so it’s really nice to take a few moments tonight to step back and really think about the future.  And I want to be clear from the beginning that I don’t speak of the future of the government, or any political party or leader in Kosovo.  No matter who wins or loses the elections on Sunday, the challenges and opportunities they will face are the same.

Just for a change, I will not speak about many of the issues you have heard me address in the past.

Instead, I would like to focus on the big picture for Kosovo—not just the road ahead for the coming months, but rather the coming years of the next government.  Because no matter whom the voters choose on Sunday, I believe Kosovo’s destination is still clear—a sovereign, independent state, at peace with its neighbors and fully integrated into Europe and the global community.

Since my appointment as U.S. Ambassador to Kosovo, I have focused on three broad priorities that I believe are the keys to this Euro-Atlantic path.  These are the issues that have shaped our assistance and our engagement with the Government and the people of Kosovo; and they are the same issues that will continue to do so on June 12th and beyond: strengthening the rule of law, supporting economic development and strengthening regional security.

So with tonight’s question in mind:

Is Kosovo on the right path to strengthening the rule of law?  The passage of the Law on the Execution of Penal Sanctions was an important step to combatting corruption; changes we are promoting to the Office of Disciplinary Conduct will finally bring an appropriate system of accountability to the justice sector.  We’ve seen an increase in arrests for misconduct and abuse of power—including in the Kosovo Police and in municipalities—and a new dedication to improving public procurement systems.  But the average Kosovo citizen’s faith in the judicial system is still incredibly low—and accusations of corruption and nepotism are still the norm in public discourse, when they should be the exception.

Too many local and state-level politicians and public officials face a revolving door of investigations, indictments, and endless rounds of court hearings, leading to too few convictions and criminal penalties.  This constant cycle undermines public and international faith in both the political system and the justice sector in Kosovo.  Kosovo’s voters deserve better from both.

I am happy that everyone is speaking about corruption during this campaign period.  Write down candidates’ statements now and hold whoever is elected accountable later.  I will help.

Is Kosovo on the right path to supporting economic development?  Small business development and entrepreurship are increasing, especially in agriculture and information technology.  But more can be done to make these enterprises more competitive and more successful.  Also, Kosovo’s education system remains stagnant, energy security remains a question-mark and significant foreign investment still seems to be a goal on the horizon, rather than in the foreground.

Rule of Law challenges and political instability will constrain Kosovo’s potential as an investment destination.

And is Kosovo on the right path to strengthening regional security?  Kosovo’s capacity to confront security challenges continues to expand.  I also have to mention the transformation of the Kosovo Security Force into proper Kosovo Armed Forces.  Let me be clear:  the United States wants and expects Kosovo to have a proper army.  And we reject any outside influence that might seek to prevent that – nobody should have a veto over Kosovo’s right to defend itself.  But how this is accomplished matters a lot.  All of Kosovo citizens’ rights and concerns must be respected; the Armed Forces must represent the whole country.  There must be a sustained public conversation across all communities within Kosovo toward this end.

Also important to regional security is the fight against terrorism and violent extremism.  Kosovo has achieved some key successes in the fight against violent extremism, which have included close and careful coordination with Kosovo’s neighbors and the Euro-Atlantic community.  Kosovo institutions performed impressively to disrupt a planned attack against an Albanian-Israeli soccer match last fall.  This demonstrated tremendous growth in developing capabilities and engagement with regional partners.  We want to build on this record, and protect Kosovo’s youth from the seductive voices that teach radicalization and violence.

Finally, I want to underline that Kosovo should recommit itself to the Dialogue with Serbia.  Dialogue talks can be frustrating and often unpopular, but let me assure you that success in the Dialogue process is the best, fastest, and surest path for Kosovo to achieve membership in the United Nations, the European Union, and NATO.  Don’t be fooled by the nationalistic rhetoric that surrounds these discussions.  This is a process that serves the strategic interests of the state and citizens of Kosovo.  There is no path to Euro-Atlantic integration for Kosovo without more normalized relations between Serbia and Kosovo.  This issue will not go away by itself, no matter how much people wish it would.

Of course beyond my big three issues, Kosovo faces other challenges.  Perhaps the most significant is the sobering news a few months ago from the OECD PISA report on education.  This is an important issue that deserves far more discussion then it has been getting, since Kosovo’s future depends very much on providing better schooling for Kosovo’s youth.

I think it is fair to say that among the general public, there seem to be many questions about the path forward for Kosovo, and a good amount of frustration over the perceived lack of progress to this point.

But considering all of this, my question—after nearly two years working in Kosovo—is no longer whether or not Kosovo is on the right path with regard to these important issues—but whether Kosovo has the ability, and more importantly the will, to overcome the barriers in its way.  After all, the right path is rarely the easiest one; and success is not only measured by the destination, but also by the progress made—and the obstacles overcome—along the way.

I’ve spoken quite a bit over the past few months about public service as a public trust and the importance of Kosovo’s leaders putting the best interests of the country above all personal and professional gain.  For me, this dedication and service to Kosovo is the key.  Together, we can address the question of ability.  From training of judges and prosecutors to small business development programs and capacity-building exercises with law enforcement, we can build knowledge and capability.  But it’s up to the current and future leaders of Kosovo to demonstrate the willingness to make progress.

It’s up to them to embrace the difficult decisions, to overcome the obstacles, and to do what is right for the future of their country.

Plain and simple—when the elections are over on Sunday, there may be political victory or defeat–but there is no victory or defeat for Kosovo.  The needs of the country will still be there and the hard work still to be done.

So is Kosovo on the right path?  I believe so.  But the road ahead is still bumpy, with barriers seen and unseen to overcome.  To stay on that path, Kosovo’s next leaders must commit themselves to serving the interests of their country above all personal or partisan political considerations.  They must embrace the difficult decisions and bumps in the road, and, above all, they must remain focused on the journey—strengthening the rule of law and combatting corruption, supporting economic growth and prosperity, and promoting regional security through a multi-ethnic, open and independent Kosovo at peace with its neighbors.  No matter who is in power, these three issues will remain the key to Kosovo’s final destination—a sovereign, independent state, fully integrated into the Euro-Atlantic community.

Thank you again for the opportunity to speak here tonight.  I look forward to our conversation.