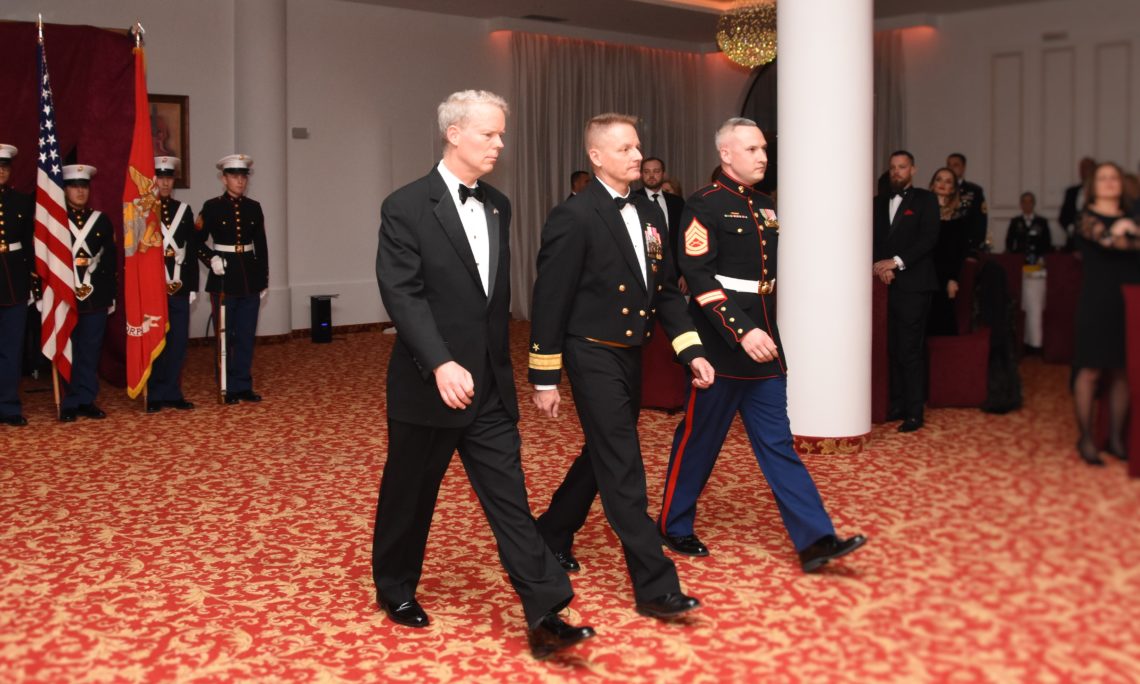 Good evening and welcome to the American Embassy Marine Security Guard detachment’s celebration of the 242nd birthday of the United States Marine Corps.

And a special welcome to Rear Admiral Tynch visiting from Naples; as well as of course, our new Marine Detachment Commander, Gunnery Sergeant Matt Johnston. Gunny, tonight is your night and we’re so proud to celebrate with you and your Marines.  You command a truly exceptional group.  In addition to fulfilling their vital mission every day, they find new ways to give of themselves.  Earlier this year they volunteered to teach martial arts to the Kosovo Security Force and spent time with kids at a camp, building ties to the community and showing us all the very meaning of service.

Marines have been referred to in so many ways throughout our history… the few, the proud; the tip of the spear; and perhaps a few other things maybe not meant for a black-tie ball.  But no slogan can capture the bravery, integrity, and tradition of this extraordinary fighting force.  Marines have been a part of America’s military triumphs and history, from the nation’s first amphibious assault during the American Revolution, to the great and terrible battles in the Pacific during the 2nd World War, to current conflicts and humanitarian missions around the world.  First to the fight, they train and deploy to the far horizons of the world in ways not imaginable at their founding.  They are, in fact, older than the United States itself.

Perhaps at times we civilians can feel remote from the service and sacrifice of our armed forces.  But I know I can speak for my colleagues and for American diplomats everywhere when I say that we feel privileged to work alongside you, as one team, with one mission.  You help make what we do possible, and we thank you.

Marines are renowned, among many other qualities, for their resilience, innovation, and sheer ability to do more with less.  I see similar ingenuity day after day here in Kosovo, where so many citizens are carving out livelihoods that contribute to their country’s growth, and building a society that works for all of Kosovo’s citizens.

That inclusivity doesn’t come easily, but sometimes social progress comes from unexpected directions.  In many ways, for example, it was the United States armed forces that led the way on racial integration, when President Truman issued an executive order in 1948 setting the first steps towards abolishing inequality in the military.  That same year, 2Lt. John Rudder was the first African American to receive a regular commission into the U.S. Marine Corps.

This was a moral imperative, yes, but there were operational imperatives as well.  And it wasn’t an accident that the greatest progress towards integration came during the Korean War.  During this war, combining segregated units in the face of high casualties became a matter of simple survival.  A decision born of necessity showed everyone the strength in coming together.

It took another full decade before our landmark Civil Rights Act of 1964, but even that date only tells part of the story.  We’ve fought our way towards greater equality with each passing decade, and we still struggle with this as a nation, every single day.  Today, our military is the most ethnically and racially diverse in, perhaps, the entire world, and we are a stronger nation for it.

And though we struggle, we have found that our diversity is an important source of our strength.  Diversity can be – it should be – a source of Kosovo’s strength as well.

This means, for example, that Kosovo needs to do a better job of making it possible for women to participate in political life.  I was disappointed to see only two women appointed as ministers in the new government; I would encourage all political parties to commit to correcting this imbalance.  I often say that you can’t win many football games if you leave half the players off the field; it’s even worse when some of your most talented players on the ones on the bench.

This means, of course, that Kosovo Albanians and Serbs need to find more ways to work together.  So much progress has been made since independence, including the milestone integration just last week, of Kosovo’s judiciary in the North, expanding access to justice for all citizens.  Another recent success last summer was the graduation ceremony for 58 Kosovo Serbs into the KSF.  And seeing LtGen Rama in Decani Monastery in uniform would have probably been impossible just a few years ago.

But there’s still more work to be done to bring Kosovo together, and every day I spend here I see additional reasons to hope.

I recently had the chance to visit a company run by a Kosovo Albanian that processes and sells medicinal plants.  This is big business all across Kosovo, and the owner employs an immense network of thousands of growers and collectors, from all of Kosovo’s communities.  This includes many rural families in remote areas, for whom this may be their only opportunity to earn income.

And diversity is not just about creating opportunity — it’s about building new avenues of cooperation and connections throughout the country.  In Zvecan there’s a Kosovo Serb-owned carpentry company that started out working in just the four northern municipalities, but is now doing business all over Kosovo.  In many ways their work is personal – they go into their clients’ homes and offices, and over coffee, they ask to be trusted.  Along the way they gain exposure to new markets for their products and they build durable ties with people and businesses from diverse communities.

This is important because all citizens have a shared interest and a shared responsibility in building a better future for Kosovo. This is how we slowly turn grievance into empowerment – and division into shared purpose.

There have been challenging days here and there will be more ahead, but I am reminded of people like Olivera Cvetanovic, and I am inspired.  Olivera is a Kosovo Serb who joined the Kosovo Protection Corps years ago and now is a Medical Company Sergeant in the KSF at Land Forces Command.  Twelve years ago she believed in a better Kosovo when many did not.  I am honored to learn of her story.  Sgt Cvetanovic is here with us tonight.

Diversity should be embraced.  Our friends in the Marine Corps know this, and indeed they continue to lead the way.  In fact, in just the last few years the historic Marine Corps training ground of Parris Island, “boot camp” for new recruits, has been led by both African American and women commanding generals.  Progress continues, in the U.S. and here in Kosovo.  We work through the complexity and the noise as we try hard to listen to our better angels.

On special nights like this, we celebrate the very finest among us, individuals who show us every day the meaning of honor, courage, and commitment.

Marines, this is your night.  It’s your party, and we are deeply honored to celebrate with you.  Happy birthday, and Semper Fi.