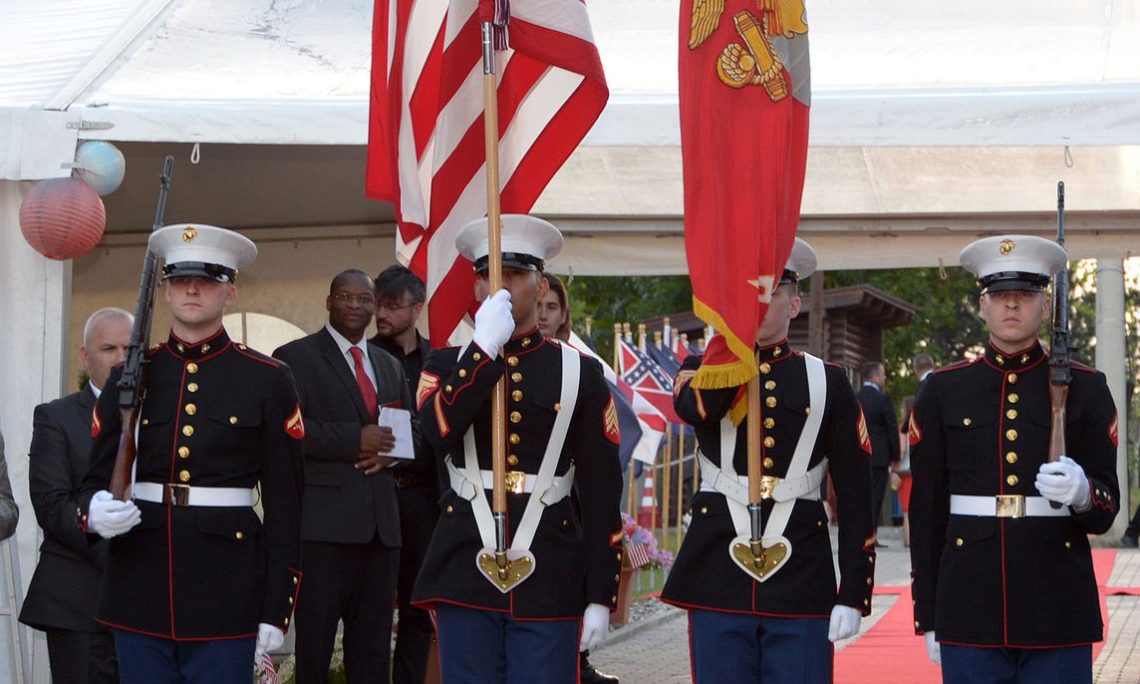 Today, as we celebrate the Fourth of July, we also celebrate and honor this great responsibility that we, as leaders and as citizens, share. From the United States of America to the Republic of Kosovo, a government of, for, and by the people… Happy Independence Day

I think it is particularly appropriate that we had Senator Bob Corker here to help celebrate Kosovo’s Independence Day in February, and today we have Senator Joni Ernst here to help us celebrate our own Independence Day.  Since we also had Secretary of State John Kerry here in December, I think it’s pretty clear that Kosovo is getting a lot of attention from senior U.S. officials. Senator Ernest, it’s a real honor to have you join us tonight.

As we stand here today, we honor the 240th anniversary of the adoption of our Declaration of Independence — a document that continues to inspire us with its principles of equality and universal rights, and its vision of democracy.   When it was written, the Declaration was quite literally revolutionary.  It aspired to create a new nation — a union of disparate peoples from different backgrounds and ideologies, but determined to create a shared national identity and a government that would reflect its values.

But of course, that declaration was not the end but rather just the beginning of our formation as a nation.  It is sometimes easy to forget that the United States too, like Kosovo now, was once a young nation.  Kosovo has celebrated just eight years as an independent country, and I am reminded that eight years after our Declaration of Independence, our government was still struggling to find its way.  At home, it struggled with its finances.  Abroad, it struggled to define and implement its foreign policy, and to overcome the legacy of war through dialogue with its former enemy.  Most often, the government was unable to reconcile political disputes over taxation, foreign investment, and international commerce.  It was even embroiled in a tense debate over territorial boundaries with a neighboring state.  In fact, in 1784 when the first official map of the United States was published, it is said to have infuriated almost everybody.  Does that sound familiar to any of you?

Yet that July, the citizens of Boston, Massachusetts, still gathered for a public town meeting, as they had every July 4th since 1776.  Noted lawyer and politician, Benjamin Hitchbourn gave the keynote speech.  In his remarks, he reminded the crowd that gatherings, like ours today, serve “to remind us that government is the people’s privilege, and not its burden.”  He went on to emphasize that, “we do not assemble to promote the views of any party, but with the freedom and firmness of men [and women] who have a right to think as well as act for themselves, and to analyze the great subject of our common interest.”

By 1789, just 13 years after independence, our country had picked apart its founding documents to create something new in that common interest — replacing what had been  a confederation of states with a Constitution and a republic of, for, and by the people.  That republic has endured, but not without struggle.  Civil war, centuries of gender and racial inequality, and conflicts both at home and abroad have challenged us to reexamine ourselves and to strive to make our republic work for all of our people.

We’re still trying today.  Back at that town meeting in 1784, Americans knew that there were bound to be growing pains.  In a diverse community there will always be differences and disagreements.  They cannot — they must not prevent a government from moving forward in the common interest of the nation.

And so, eight years after independence here in Kosovo, with the wounds of history still fresh, one must also be reminded that having a free, independent, and democratic government is indeed both a privilege and a responsibility.  Even when a small group of politicians is violent and disruptive.  Even when others decide that inaction is more politically comfortable than confronting tough and important issues.  Even when a population loses faith in its government, politicians must remember that privilege and responsibility, and work hard to regain the faith of the citizens who are their employers.  One must embrace these challenges as opportunities — opportunities to lead and opportunities to work to build a brighter future.  Because Kosovo, like the whole rest of the world, will not continue to improve without positive steps and hard work by individuals.

To those politicians and government officials whose goal is to make Kosovo a better place for the next generation — I applaud you.  To those whose principal goals are self-servingly political, personal, or financial — I strongly urge you to reexamine your priorities.  Likewise, citizens who see their country and its budget as a source of unjustified hand-outs should think about what they are really doing.  They are taking not just from their fellow citizens but from Kosovo’s children and grandchildren, and from its future.  Building the foundations of a fair and just republic — an enduring republic — takes real work and commitment to the greater good.

And there is plenty of real work to be done here:  in rule of law and anti-corruption, where we’ve seen some signs of recent progress that must continue; in economic development and attracting foreign investment; and in regional security and strengthening relations with Kosovo’s neighbors.  Kosovo must move forward in the common interest of its people.  The United States will always stand beside you—but you need to be the champions of your destiny.

When American Founding Father Benjamin Franklin emerged from the Continental Congress in 1787, a woman on the street stopped him.  “Well, Doctor, what have we got?” she asked.  “A republic or a monarchy?”  “A republic, Madam,” he responded.  “If you can keep it.”  The United States has worked to keep its republic for 228 years.  Kosovo must do the same.

Today, as we celebrate the Fourth of July, we also celebrate and honor this great responsibility that we, as leaders and as citizens, share.  From the United States of America to the Republic of Kosovo, a government of, for, and by the people, is a privilege that we have earned, and a republic that we must each work to maintain.

Faleminderit shume; Hvala; Thank you all for being here and for celebrating with us tonight.