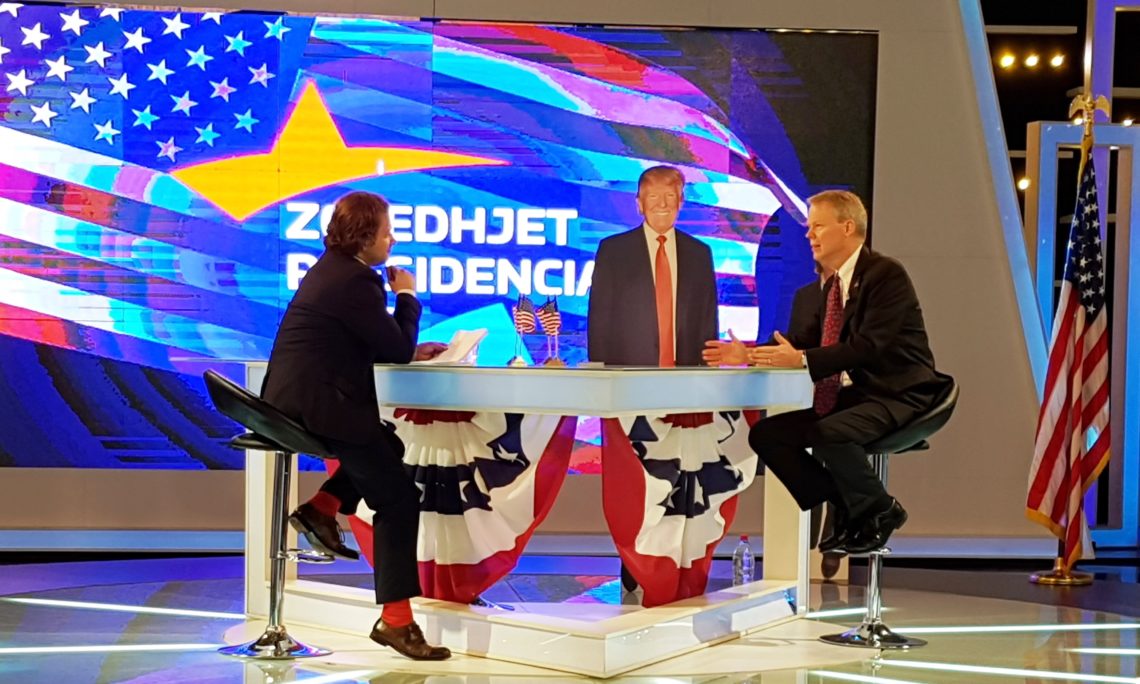 AMBASSADOR DELAWIE: Good morning Kushtrim. It is great to be here.

KLAN KOSOVA: Ambassador, can we say that we have new President of the United States?

AMBASSADOR DELAWIE: Well, right now and last I checked couple of minutes ago the major news networks in the U.S. were projecting that Mr. Trump would win the Election. There are still states being counted. In order to win, you have to get 270 electoral votes and of course, what we’re seeing right now, are the projections based on exit polling data from the states and the cities. I mean, some cities that have electronic balloting have probably counted everything up by now, based on exit polls. But, certainly it looks like Mr. Trump will get the 270 electoral votes required to win at this point. But the official count of course comes, you know, somewhat later — after several days, after everything is checked.

KLAN KOSOVA: After today’s procedures, can we have the new President certified?

AMBASSADOR DELAWIE: Well, technically there is this thing called Electoral College which actually meets in mid-December. But, its Electoral College closely follows the popular vote and in most cases and so, we will likely see today what are most certainly the results.

KLAN KOSOVA: Can you describe the Election Day, yesterday. We were together all the time but you have watched of course what was happening in the U.S.

AMBASSADOR DELAWIE: Well, I am happy that there was peaceful voting across United States. There have been some concerns that it wouldn’t happen and it turns out that there was a lot of energy by the voters, a lot of people were very happy to cast ballots for whichever candidate they chose.

KLAN KOSOVA: Ambassador Delawie, what will be the impact regarding Balkans?

AMBASSADOR DELAWIE: I think United States foreign policy regarding Balkans has been remarkably consistent for the last couple of decades. whether there has been a Republican in the White House or a Democrat in the White House. I don’t really expect that to change. Regarding Kosovo as well, certainly there has been very strong support for Kosovo across political spectrum in the United States so, I expect the excellent relationship between Kosovo and the United States to continue. I think relations between Kosovo and the United States are excellent, have a…I’m trying to think of the word this early hour with a little sleep, trying to think of a confluence of values on the importance of the Democracy and the way our countries are run, we’ve been working closely with Kosovo since the beginning and again since the Independence to share as much of what we have learned with Kosovo, as possible. And, I am very pleased with the way that’s going.

KLAN KOSOVA: Ambassador Delawie, thank you very much for your time.