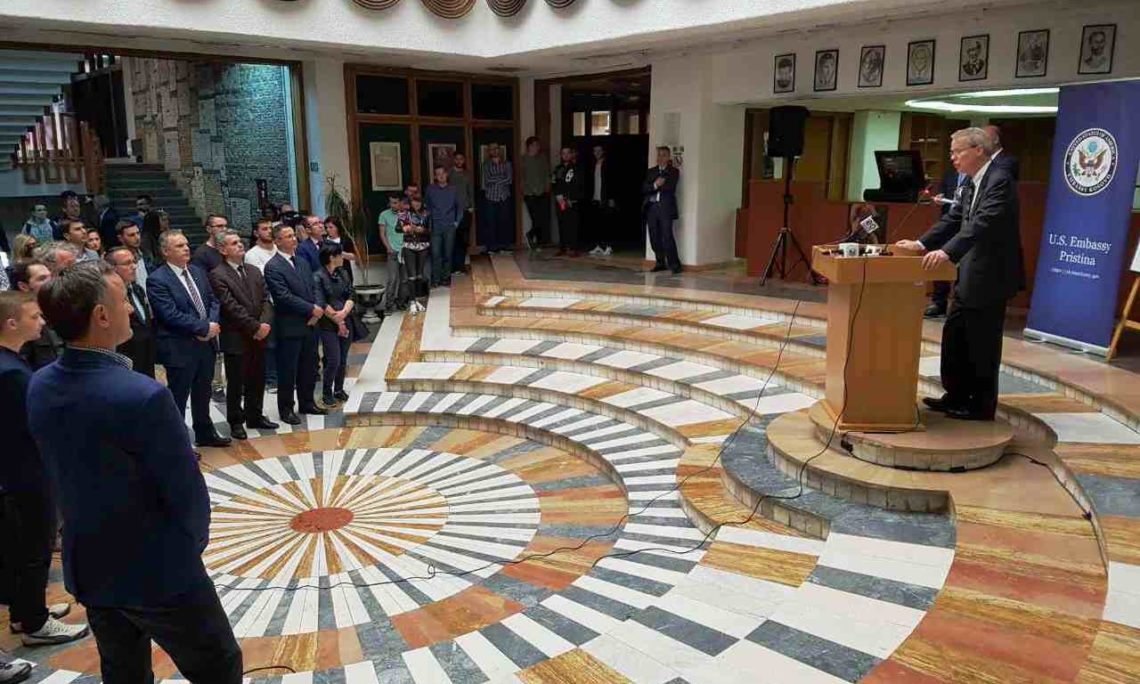 Good afternoon to you all, and thank you for coming to the opening of this photography exhibition, “American Visionary: John F. Kennedy’s Life and Times”.  I want to thank the Smithsonian American Art Museum in Washington, D.C. for providing us with this exhibition, and I want to thank Fazli and the National Library for being our hosts, beginning today through May 28th.  I am also pleased to mention that from the National Library, the exhibit will travel to other communities around Kosovo, including Prizren, Peja, Mitrovica North and Viti, through the end of 2017.

John Fitzgerald Kennedy, the 35th President of the United States, was born one hundred years ago this month.  As its title suggests, this exhibition showcases his life from growing up the second of nine children of Joe and Rose to raising his own children, Caroline and John, Jr. with his wife, Jackie, in the White House.  Though for many of us, his life and career are already unforgettable, this exhibition captures many of the moments behind the legends we already know so well.  From his rapid rise in politics to his tragic and untimely death, these photographs so vibrantly capture the iconic stature of President John F. Kennedy.

But for me, and many others in public service today, these photos represent the inspiration of President Kennedy.  Some might even call it our ethical compass, each and every day we come to work.  I have devoted my career, and my colleagues theirs, to serving the American people and the governments which they have elected.  For over 30 years, I have embraced the fact that public service is just that—service to the public.

On January 20th, 1961, in his inaugural address, President Kennedy echoed this sentiment in words that will forever resonate with the those committed to making positive change in their nations and beyond:  “And so, my fellow Americans: ask not what your country can do for you, but what you can do for your country.”  This call to service—as relevant here and now as it was back then—is one of President Kennedy’s enduring legacies.

He believed passionately in the democratic system, where every citizen—from the President to the worker—had a critical role to play.  “In a democracy,” President Kennedy was fond of saying, “every citizen, regardless of his [or her] interest in politics, ‘holds office’; every one of us is in a position of responsibility; and … the kind of government we get depends upon how we fulfill those responsibilities. We, the people, are the boss, and we will get the kind of political leadership, be it good or bad, that we demand and deserve.”

In a democratic system, this is what elections are for.  They are not the source of political power or position– they are the means by which the people select their representatives.  And in a representative democracy such as ours- and yours in the coming month- government representatives should be selected not simply because they will represent the views of the voters or their political party.  They should be selected because the voters have confidence in their judgment to serve the collective best interest, their dedication to serving the public good, their integrity, and their courage.

It was the last of these qualities—courage– that President Kennedy focused on most often.  In his 1956 Pultizer Prize winning book, “Profiles in Courage”, President Kennedy wrote stories of leaders- in his words- “whose abiding loyalty to their nation triumphed over all personal and political considerations”, thus demonstrating “the real meaning of courage.”

According to President Kennedy, a nation needs leaders with the courage to think beyond the traditional political patterns; those who will embrace difficult decisions, rather than shrinking from their responsibilities to the nation.  This is the courage to which I, as a public servant, must aspire—and this is also the courage to which our democracy—and yours—must hold our leaders.

Kosovo needs more public servants and political leaders like this—individuals committed to serving the interests of their country above all personal or political considerations; leaders of judgment, dedication, integrity and, above all, courage.  But it is up to you the citizens, the boss, as President Kennedy called you.  During the campaigns and in the voting booth, and also for those who remain in political office today, you are the boss– and it is up to you to demand the type of political leadership that you deserve.  Not just for the upcoming elections, but for the future of Kosovo.

Thank you again for being here.  As you explore the life and times of President Kennedy through this exhibit, I hope his vision will inspire you, as it has me.