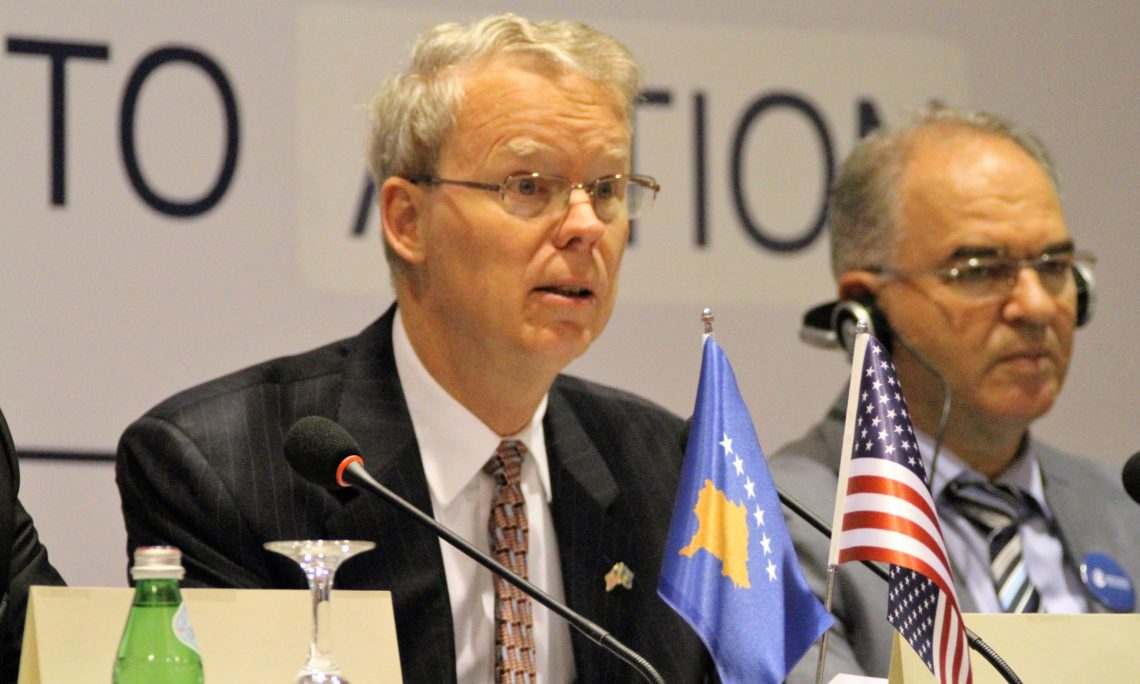 The Embassy of the United States of America is dedicated to strengthening the rule of law system in Kosovo. Partnering with stakeholders from Kosovo institutions, the civil society, and the donor community, we are working to promote a justice system which is fair, legitimate, and accountable to citizens.

The Demand for Justice (D4J) Program supported by the US Department of State’s Bureau for International Narcotics and Law Enforcement has amplified these efforts by creating space for civil society and justice sector institutions to work together to address concrete obstacles to accountability, accessibility, and inclusion in the justice sector.

Since it formally started just about a year ago in October 2016, the Demand for Justice coalition has countered complacency, risen above differences, and demonstrated success in working together to solve problems that affect Kosovo’s justice system. I congratulate member civil society organizations and representatives from the bar, the judiciary, and the prosecution service for their willingness to take a leap of faith and join forces to tackle real problems with concrete solutions.

The coalition has been vocal about court decisions and has actively held the judiciary accountable to its obligation to publish them. In this regard, D4J’s e-Justice platform of court decisions, hearing schedules, and asset declarations of judges contributes to enhanced transparency and allows for facts and figures to inform reform efforts in the rule of law sector.

The justice system suffers from inefficiencies in the provision of free legal aid to defendants in criminal proceedings, an obligation stemming from the Constitution of Kosovo. The coalition has bridged this gap by establishing the first live-legal clinics through which law students receive experiential learning and participate in the representation of indigent clients.

Witnessing the success in criminal cases referred to the clinics for representation, I strongly encourage the Kosovo Bar Association, the lawyer community, the Free Legal Aid Agency, and the government of Kosovo to join efforts to provide their services to unrepresented criminal defendants who are not eligible for ex officio representation.

The coalition has mobilized institutions to participate in the first Judicial Integrity Survey, providing them with the​ ​opportunity to share, anonymously, their concerns about the dynamics of corrupt behavior and the specific circumstances under which they occur. I commend the Kosovo Bar Association, the Kosovo Judicial Council, the Kosovo Prosecutorial Council, and the Kosovo Police for their leadership and willingness to work together and with civil society to conduct this groundbreaking study. ​This is a remarkable step towards improving integrity and restoring faith in justice institutions.

Most importantly, the D4J coalition has worked with youth to educate them about justice and the importance of participating in activities to inform their communities and engage in dialogue with their institutions to improve access and promote accountability. Mobilizing the next generation of citizens lays the foundation for a vibrant democratic and inclusive society.

Justice demands the best of us. When people come in contact with the justice system, they are often at their most vulnerable and their expectations are high. Your efforts in the past year have shown that together we can make a difference and advance reforms that promote a more accountable, more accessible, and more inclusive justice system for all citizens of Kosovo.

Having seen the progress made to date, I am especially pleased to see the continued plans to move forward to increase transparency with which justice is delivered, to improve accountability, and to nurture the active citizens of future Kosovo.

I firmly believe the Kosovo’s success as a state will be judged primarily by the further development of its rule of law sector, whether it is seen as providing equal justice before the law to all, and whether the rule of law sector is perceived by Kosovo’s own citizens as treating all fairly.  The work you have done and will do in the future is vitally important to advancing those goals.