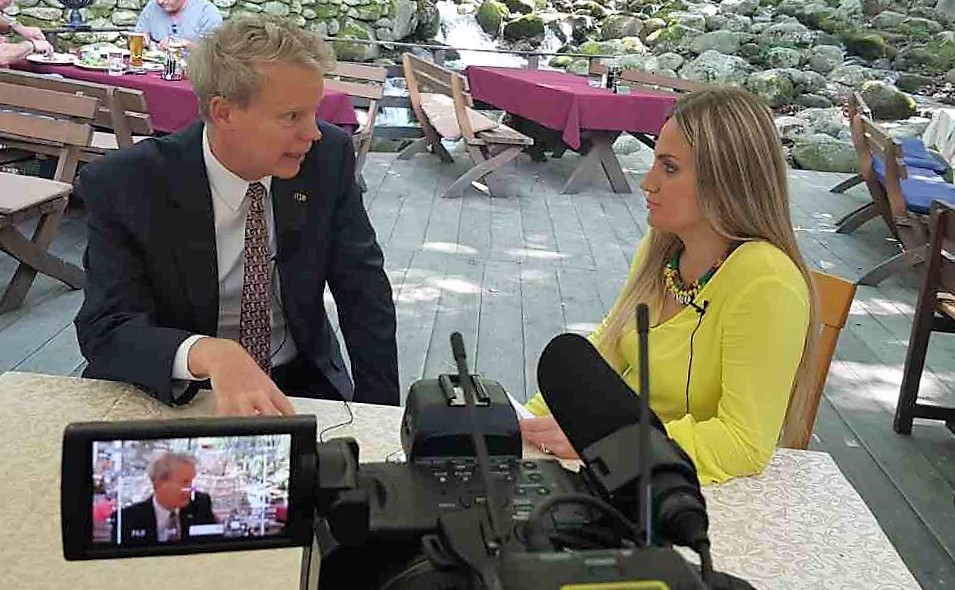 TV Herc: Your Excellency, thank you for your time for this interview. Today you visited in Strpce a project supported by the U.S. Government through USAID. Are you satisfied with the implementation and with what you saw?

Ambassador Delawie: First of all, thank you very much for taking the time to talk with me today. It is a pleasure to be here in this really beautiful location. I really enjoy Strpce so I am happy to be here. Today, so far, I’ve had a very good meeting with a couple of NGOs, one that is oriented towards women’s issues and one that is oriented towards young peoples’ issues. It was great to see such enthusiastic people who were interested in solving real problems, that was terrific. In a little while I’m going to see a farmer who is growing medicinal herbs for sale. I was very impressed when I drove in to Strpce to drive by so many raspberry plants and I’ve understood from talking with people here that Strpce citizens are finding a lot of employment and making a lot of money growing and selling raspberries here. I’m very happy with what I’ve seen so far today, it’s really a privilege to be here.

TV Herc: How much money did the U.S. Government invest in Kosovo from 1999 to today, and how much of that was invested for the Serb community?

Ambassador Delawie: Since 1999, we have invested about $1.8 billion U.S. dollars in Kosovo. We don’t actually track it by ethnic group so I can’t divide it up for you that way, but we are committed to doing our best to help improve factors here for all of Kosovo citizens, of whatever ethnicity, whether they are Albanians or Serbs or non-Serb minorities. We have projects that work with all of these groups in various cities and municipalities across Kosovo.

TV Herc: You have said recently that Kosovo is at a big turning point, and that positive change is expected or bigger and bigger stagnation. Which one is more likely, more precisely in what direction will Kosovo go further and from what will that depend?

Ambassador Delawie: Kosovo is at a turning point because of all the changes that are going on in the world, the changes going on in Europe, people are distracted by different things. The world is not going to stand by and wait for Kosovo to figure itself out. The world is moving, and Kosovo needs to move too. It is at a turning point because I think it has an opportunity now, that it may not have in the future, to make the decisions that will put it firmly on a European path so it becomes a European country like any other and Kosovo citizens, from whatever group they come from, can enjoy the benefits of living in a European nation.

There is a risk that Kosovo does not make these right decisions, and that is why I have been emphasizing the turning point. It is very important for all of Kosovo’s citizens and the politicians that have been elected in the last month to make the right decisions so that Kosovo can advance, so that its citizens can enjoy the full benefits that a democracy, their Constitution gives them. The citizens can take advantage of economic growth to improve their livelihoods.

TV Herc: You mentioned the policy. What should be the three main priorities of the future Government of Kosovo and why?

Ambassador Delawie: My main priorities for myself, what we have been working on since I have been here are: rule of law, economic development and regional security. Rule of law, I think it is clear, that there are serious challenges. There is the corruption challenge, there is the backlogs in the courts challenge. All of these things make it harder for Kosovo’s citizens to achieve their goals. Economic development: the unemployment rate in Kosovo is around 30 percent, among youth it is around 60 percent. These are very, very high numbers and very discouraging to a lot of people. Kosovo of course has many, many talented citizens that want work, that want to make a contribution. We have to help improve economic prospects for all of them. Regional security, there are many important issues here. Kosovo has to do a better job of building better, stronger relationships with all of its neighbors, has to deal with the border with Montenegro issue, has to improve its relationship with Serbia, has to implement promises that it has already made, such as the creation of the Association of Serb Majority Municipalities.

TV Herc: How do you assess Pristina institutions’ relationship so far towards Serbs in Kosovo?

Ambassador Delawie: I think there has been a tremendous amount of progress over the last several years. I see integration that probably people didn’t expect five years ago that is just happening routinely now. The Serb majority municipalities are working with the central government on things like budgets. It is very important for any municipality to follow the rules on budgets so it gets funding for infrastructure and other things. I think we have seen the Kosovo Police are far more integrated than anyone would have expected. We see the Kosovo Security Force is much more integrated and there are more Kosovo Serbs and other minorities joining up with the KSF. I think things are going well, things are making progress. Of course there is a lot more progress that has to be made and I hope the politicians that were elected last month are going to commit themselves to working toward the benefit of their constituents to help make this progress possible.

TV Herc: It is obvious that Serbs from Kosovo are turning more towards Belgrade which was also showed by the latest election results, where the Belgrade-backed list won among the Serbs, what do you think, why is this so?

Ambassador Delawie: I don’t want to try to analyze why people voted in a certain way. But I do want to say that all of the people that were elected in June whether they are Kosovo Serbs, Kosovo Albanians, the other minorities, they, I believe, need to focus on serving their constituents: the people that live here, the people that voted for them, the people that they will be living with and living among. I really think it is important for politicians to step back from the mentality you see in too many countries where they are working for themselves. They don’t need to work for themselves or their brother or their political party or some other factor- they need to work for the citizens of the state of Kosovo.

Ambassador Delawie: There are two sets of issues there. There are issues that are important for everybody that lives in Kosovo, and these are things like economic growth and corruption. How do you make it more likely for people to want to invest their money here? Whether they are foreigners or domestic people. The investment climate has to be improved because that is the only way we are going to create more jobs for all these young people that graduate from high school every year.

Secondly, there are issues that are particular to the Kosovo Serb population. Things like the formation of the Association of Serb Majority Municipalities, which will make it easier for the Serb majority municipalities to coordinate on issues such as education, healthcare, things like that.

TV Herc: In the end, who should form the future Kosovo Government according to you, and is there someone who for example is not acceptable for you?

The second part of your question- we will work with any government that emerges according to the rules and the laws of Kosovo’s Constitution, Kosovo’s laws. Any government willing to try to make progress on key issues that are facing Kosovo today. These are the ones I mentioned earlier- the rule of law, economic development, and the regional security issues. We are eager to work with politicians, with the government, that will work to solve the problems that are facing Kosovo’s citizens today.

TV Herc: That was the last question for this interview. Your Excellency, thank you for being a guest of TV Herc.

Ambassador Delawie: It is a pleasure, it is great talking to you, thank you so much.