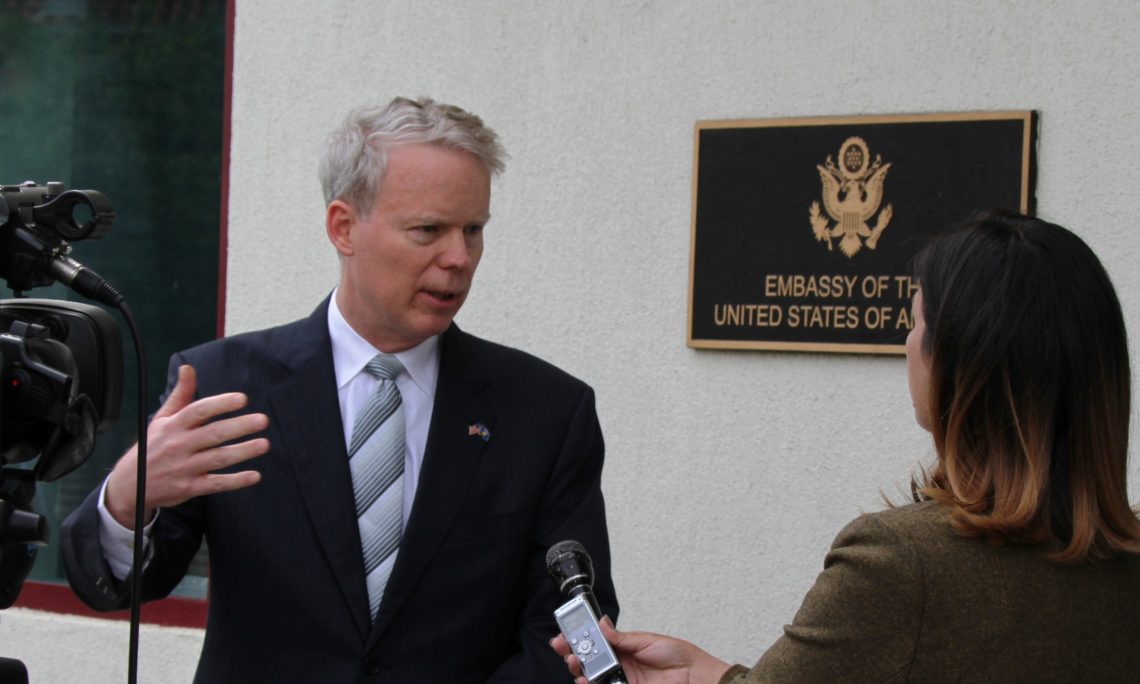 RTK: Mr. Ambassador, Kosovo MPs yesterday voted the motion of no confidence for the Government of Kosovo. Also, the President approved the dissolving of the Parliament. How do you see this development?

Ambassador Delawie: Well, first of all, it’s a shame that the political parties were not able to work out their differences so that they can continue to work on behalf of Kosovo’s citizens. It’s a shame that we are entering the period where there will be some kind of election stasis for a period of time as elections happen, a government is formed and things like that and not a lot is going to get done. I think it is important to recognize that the world is not going to stay still while Kosovo figures itself out. So, I certainly hope everyone moves thru this process as quickly as possible so that the new officials are elected and appointed to begin working together on behalf of Kosovo citizens.

RTK: A few weeks ago, when I had an interview with Deputy Assistant Secretary Yee, he said that it is not a good idea to hold early elections in Kosovo because this would postpone the important processes in the country. You also mentioned this during your meetings with Kosovo leaders. What will happen next, what is the next stage in the Kosovo political scene?

RTK: According to you, what will happen with important processes such as Demarcation with Montenegro and Association of Serb Majority Municipalities?

Ambassador Delawie: There have definitely been some lost opportunities and I am sorry about that. And certainly the Border Demarcation Agreement with Montenegro was one of those. That issue is going to stick around, it is not going away. I can say again and again that the Border Demarcation deal that was reached with Montenegro was the right deal, it reflects the actual Kosovo/Montenegro border. I was disappointed that the government did not send the agreement to the Assembly. I was certainly disappointed to hear so many falsehoods about that. Disappointed to see so many people sacrificing the future of Kosovo’s youth for political benefit. There are other issues certainly. Kosovo needs to make more progress on visa liberalization. The EU’s drawn up the list. The future Kosovo government will have to continue to execute that list. Relations with neighbors are very important.  Kosovo is not going to make a real progress on its future as a normal European country without having better relationships with its neighbors. Not easy, I know, but absolutely essential and it’s got to happen. And of course my hobby horse, rule of law, we need more progress on rule of law. Kosovo needs economic development to get at its toughest economic issue which is unemployment of 30% or so. To get more economic development you need more rule of law, because both foreign and domestic investors are going to be less likely to invest here unless there are improvements of rule of law.

RTK: Is there a chance that we will deal with similar situations under the new Government, I mean with important processes such as demarcation and Association?

Ambassador Delawie: Look, governing is not easy. I have been a government official for more than thirty years. You have to make hard decisions. You have to move ahead. No matter what you do someone’s going to be disappointed by it. I know that. So you just, it is incumbent of people that are considering running for Assembly or for the election that is coming up to make that decision.  OK, am I willing to make hard decisions? Am I willing to move ahead and am I willing to work for the people of Kosovo? And you have to know going in that no matter what decision you make, somebody’s not going to be happy with that decision. But as long as you are confident that you are working for the benefit of your country, I hope you will be okay with that.

RTK: There have been concerns that there may be possibilities that the elections can be manipulated. Are the international mechanisms going to be involved in these elections in order for this not to happen?

Ambassador Delawie: I can tell you I have already cancelled vacation for all of my colleagues for the two likely election dates coming up in June. We will be out there. We will be observing. We will hope for weather like this but we’ll be there anyway no matter what. We will work closely with our colleagues and partners in the international community. I know that many other foreign, international organizations are very interested in this issue and will be out in force. It is very important that Kosovo have credible elections. It is important for the citizens of Kosovo of course, but it is also important for Kosovo’s partners in Europe. People want to know that the results of the election reflect the will of the citizens. Vitally important. And it is, I think, important for Kosovo to be able to set a positive example of how elections can and should be run for a region where that doesn’t always happen.

RTK: Mr. Ambassador, What is your message on the verge of electoral campaign?

The other thing I want to say is I think it is very important for all the government officials, whether they are civil servants like me or political appointees that remain in office, to re-commit themselves to serving all the citizens of Kosovo. Every group, every citizen, equally. Give them your full devotion of public service.

And finally, the United States continues of course to stand with Kosovo. We will work very hard as we have been doing to support Kosovo’s efforts to improve rule of law, economic development and regional security. And we certainly support Kosovo on its path to becoming a normal European country like any other.