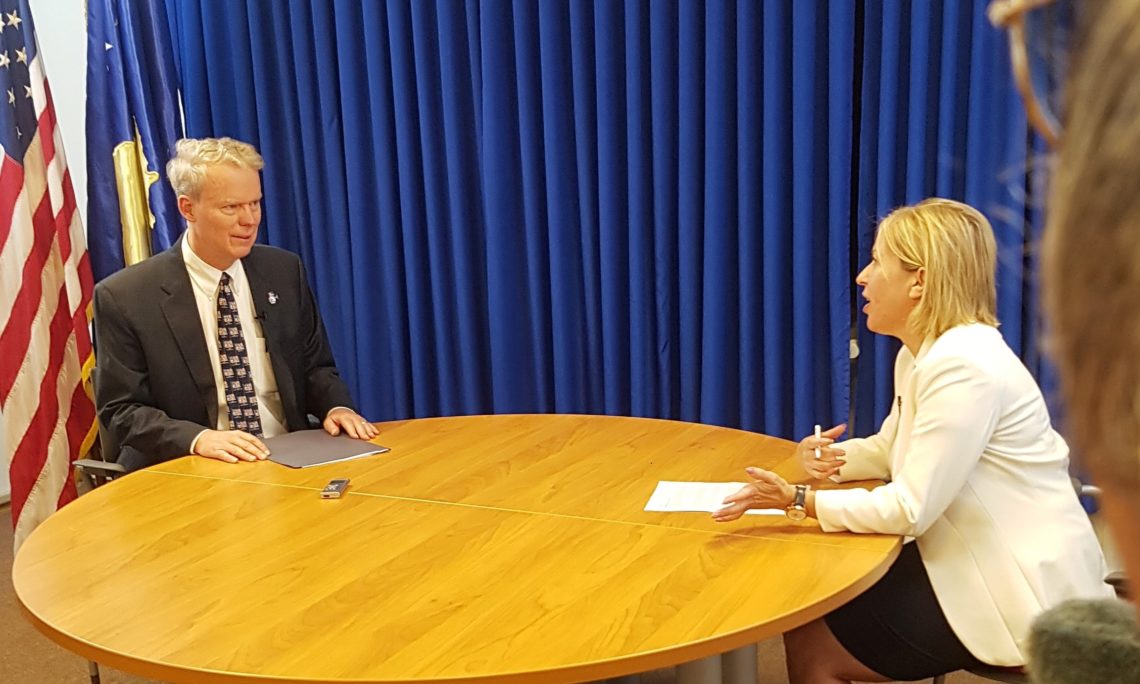 AMB: It’s great to be here Tatjana. Thank you.

TL: When, just a month after arriving in Kosovo a couple of years ago, you carried out an interview with KoSSev, you praised both the decisions of the Kosovo government and the Assembly – back at that time – to form a Special Court.  You underlined the importance of the then signed Brussels agreements as well.  Now, by the end of September you will be leaving Kosovo. From this time distance, how would you comment about these issues, with special regard that these two topics, both the Brussels agreement—the Dialogue, and the Special Court de facto, have disappeared from the focus of public?

AMB: I wouldn’t really agree the Dialogue has disappeared from the focus of the public, there is a lot of discussion about the Dialogue. It’s not entirely fruitful discussion, but there’s certainly a lot churn in the public about that. I still think it’s very important for Kosovo and Serbia to find some kind of modus vivendi, to get to this normalization that we’ve all been talking about.  I think the conversations that have happened between President Thaci and President Vucic are very important.

I think on the Kosovo side there needs to be additional democratic legitimacy for these negotiations. I’d love to see the Kosovo Assembly vote some kind of strategy or goals, or something like that, to frame what the goals of Kosovo are in this discussion. So I think that’s the big thing lacking right now. If there is some kind of deal between President Vucic and President Thaci and it comes back to the Kosovo Assembly and it’s completely news to them, that’s not going to be good because an international agreement like that will require eighty votes. And as I know from my experience with the Border Demarcation Agreement with Montenegro, getting eighty votes for anything here is non-trivial. So I think there’s got to be more involvement of the political process in this discussion.

Regarding the Specialist Court, there was a flurry of activity last December and January. I made some very strong remarks in January about it. We were pleased that the effort to undermine the Specialist Court ran aground. The United States continues to support the Specialist Court, it’s very important to bring justice to the victims of the war here. And, I think the most visible demonstration of continued U.S. government support for the Court is that the new Specialist Prosecutor, his name is Jack Smith—he’s an American, is provided by the United States government. He’s a very experienced prosecutor, both in the U.S. system and in international tribunals, and he, by all accounts, is a very strong guy. So, I think the fact that the United States government has provided this prosecutor, chief prosecutor, is a very strong indication of our continued support for the Court.

TL: Can I ask you how soon do you predict that the topics of the Special Court can be, again, brought back? Both in public and in this kind of political arena?

AMB: Well, the court is not a political animal, it is a justice animal, and they don’t work for me. Even though the prosecutor is an American, he doesn’t work for the American government—in that role. He’s independent, just like the judges are independent of the European Union, which provides them. So, I have no idea when they are going to start making decisions, that’s got to be up to them. And we will support whatever they do.

TL: In the same interview that I referred to, in the beginning of this interview, we asked you what message do you have for the Serbs and Albanians; and I’ll quote just what you said a couple of years ago: “The diversity and respect of others is the cornerstone of multi-ethnic democracy and the policies of the United States is to encourage the continued development of multi-ethnic democracy in Kosovo.  The relationship between Kosovo Albanians and Kosovo Serbs is key to maintaining peace and development in the region and is crucial for the country’s future.” So now, today, when we are on the verge of a possible exchange of territories, some call (it) border demarcation, some call ethnic partition, and many fear that this kind of scenario can push the region back to war. Actually, many people do fear of new conflict. How do these messages sound to you? At the beginning—that you carried out at the beginning of the mandate, so from this, again, time distance, and this new political rhetoric, how do these messages sound to you?

AMB: I’m still pretty pleased with what I said. I continue to believe that Kosovo needs to be a home for whoever wants to live here, from whatever ethnic community they are from. The United States has certainly supported multi-ethnicity in Kosovo since the beginning. I see continued progress in that area, certainly in the north we have integrated the judicial system so that is now part of the Kosovo system. That’s positive. Walking downtown on Mother Teresa Boulevard in Pristina I hear Serbian spoken a lot. Many people have told me ten years ago that never would have happened. People would have been afraid to speak their language downtown. Now it’s common.

So, I believe that just like for the United States, diversity and multi-ethnicity can be a source of strength for Kosovo, for the people that live here. I think if you look at the countries of the world that are generally admired by other people, they’re not admired because they’re all mono-ethnic. They’re admired because they can take from all the different communities and produce something that’s better than any one of them could produce on its own. So, I am still committed to a multi-ethnic, successful Kosovo. I’m an optimist and I think in ten years from now when I come back to Pristina, I expect to see a very vibrant, lively city where people from all over the Balkans are very happy to be here.

TL: With the mono-ethnic communities ten years later? How do you imagine the border? Do you envision the change of border in ten years from now as was suggested now by the two leaders? At least they talk about…one leader talks about delimitation, the other leader talks about border correction, and is talking about the secession of three municipalities from the south of a sovereign country to Kosovo.

AMB: So, our position is not to get in to the details of an agreement right now.  So our position as the United States is to provide a space for Kosovo and Serbia to make some kind of agreement that will be enduring that could be embraced by all…by the people of both countries, that would contribute to stability in the Balkans rather than the opposite, that would be fair, and that leaders could explain to their public.  So, exactly what the content of that agreement is I am not prepared to comment on right now. Certainly there are limits to what we will accept.  And if there is a draft agreement that we’re not happy with, we will certainly make our opinions known.

TL: Limits to the draft agreement?

TL: Delimitation, land swap, border correction, partition—if this would be the cornerstone of the draft agreement, with clear ethnic division line, do you envisage a limitation already set up to that agreement? Or let me put into another way—do you exclude violence in its entirety if any of these scenario takes place?  Doesn’t matter how it is called – is it ethnic partition, land swap, delimitation, border correction. And how acceptable such a solution would be for the U.S. if any violence takes place along with these—delimitation or such scenarios?

AMB: Ok, I got to separate that into two parts, because as I said I’m not going to talk about a possible solution where we are with that right now.  Regarding violence, I think I can be pretty firm on that.  We oppose violence.  The Balkans has seen enough violence.  I think the people of the region have seen plenty of violence and they don’t want to see any more.  So, and we are devoting substantial resources in the NATO Kosovo Force here, which is hundreds and hundreds of American soldiers, and they’re here to protect people.  They’re here to prevent violence, they’re here to provide for freedom of movement, and a safe and secure environment, and that is a giant commitment for us and these soldiers—right now they’re from California, which is where I’m from, but there’ll be a new group soon, they keep coming every nine or ten months—are here to make sure that there is no violence….to deter violence.  And so far I think they’ve been very successful.  I think, in fact I know, that KFOR is widely respected by all the people that live here, and everyone is always happy when they see the KFOR soldiers drive by in their various NATO uniforms.

TL: Ten years from now, you said – when you get back to the region. Do you envisage there will be no conflict or violence?  Can you promise this to the people?

AMB: It’d be silly to promise.  I’m sorry.  I don’t want violence.  I’m a diplomat.  My entire career has been devoted to peaceful resolution of problems.  As I said, the United States has committed a lot of resources, a lot of really good people, to make violence as unlikely as possible.  Can I promise that?  Of course not, but we will certainly do our absolute best to ensure there is no violence.

TL:  To switch to your personal career – what was your biggest personal success while you were here in Kosovo and what do you think that could have been done better?  Not necessarily from your side, but things you would like to see if they could happen better.

AMB:  I think we’ve made some progress on rule of law, which I’m pretty proud about—sentencing guidelines, integration of justice in the north, civil documents for minority communities—not complete yet, but progress, the special court we already talked about and there’s a lot more transparency in the government here now than there was before.  There’s lots of judicial decisions being published, there’s electronic procurement, so if the government wants to buy something it’s got to make it public.  So, those are very positive.  We’ve had some very positive economic news that we’ve contributed to over the last several years—raspberries.  When I got here raspberries were—there were almost no raspberry exports now its ten million euros a year of raspberry exports to Western Europe.  That’s a lot of jobs.  A lot of jobs in rural areas.  Medicinal plants—there’s this giant cooperative of mostly women who collect and process medicinal plants to export mostly to Switzerland.  And that’s a multiethnic community of women who do that.  We’ve contributed to that, I’m very proud about that.  There’s a flourishing civil society—you’re of course part of that and it’s great to see investigative journalists making a difference and shedding light on tough issues.

Regarding, you know, what I wish we could have done.  I wish I had a magic wand that could get rid of corruption because it frustrates everybody.  It unites all of Kosovo’s communities—they all hate corruption.  And, so, unfortunately, it’s not an easy to solve problem.  It’s something you just got to work at, you know one lane after another, keep trying to close down the opportunities for corruption.  And, you know, I will go but my embassy and my team here will keep working on that issue because it is so important to Kosovo’s future.

TL:  Thank you for talking to KoSSev.