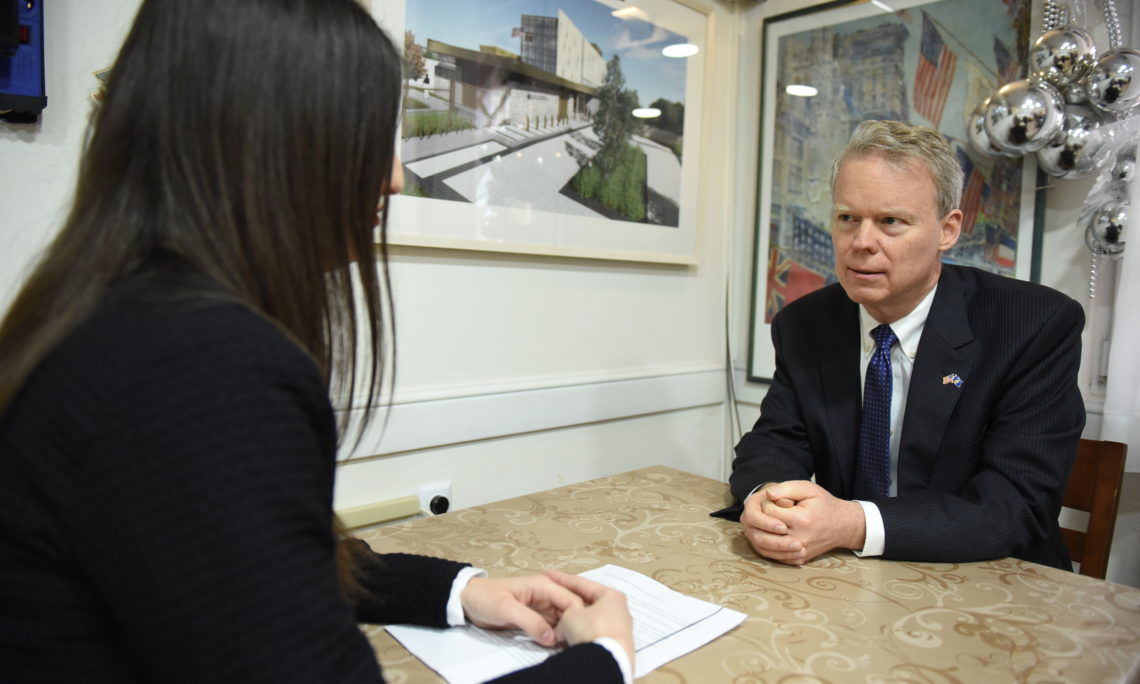 1.      Mr. Ambassador, Kosovo is about to mark the 10th anniversary of its independence. What is your assessment of the work done in Kosovo as a young country that eyes European integration?

It is incredible to consider how far Kosovo has come in 10 years. Kosovo should be proud of its democratic legislative framework, free and credible elections, and growing economy. Of course, the challenge for Kosovo’s next ten years is: how can this country tackle next-level problems like corruption, an efficient energy supply, equal opportunities for women and minorities, and dealing with Kosovo’s wartime past?

I believe big things can happen in the next ten years. Kosova e Re can transform Kosovo’s energy supply, lessen pollution, and remove an important obstacle to economic growth. Kosovo’s judicial system can commit to prosecuting high-level corruption wherever it is found. After passing the Border Demarcation Agreement, Kosovo’s citizens can travel more freely outside of the country. And a more diverse group of people can play a role in Kosovo’s highest-level decision making and economy. I think Kosovo can achieve all of these things, and the United States will be here to assist in these ambitious goals.

2. Regarding latest developments past Friday in Kosovo Parliament when one attempted to include the decision on the nullification of Special Court. What is your opinion on all this? Should this Court be nullified?

If I could start by saying, I was outraged by the effort on December 22, on Friday, to abrogate the Law on the Special Court. The United States does not support this or any other effort to undermine cooperation with the Court, which I think is vital because it brings justice to the victims of war crimes and shows Kosovo’s readiness to become a full member of the international community.

This process, which was led by a few individuals, was clearly undertaken in secrecy to avoid the scrutiny of Kosovo’s public and its international friends. I am extremely disappointed at anyone who would sacrifice the interest of his country to promote his personal interests.

We will view those behind this effort as complicit in any further attempt to abrogate or change the law, or to undermine Kosovo’s commitment to the Court in any way.

Any such efforts would have specific and profound consequences for Kosovo, for its European future, and for its relationship with the United States. That’s what I think.

3.      About the Special Court – how much do you think it can cause instability in Kosovo as a result of indictments?

What are the possibilities for Kosovo to sue Serbia for crimes committed in 1998-2000, and how much can you (as USA) help in this?

Unfortunately, I think the greatest source of instability in Kosovo in relation to the Special Court is the reaction of politicians, who, instead of giving accurate information about the mandate of the Court, tolerate irresponsible speech. Cooperation with the Special Court showcases Kosovo’s commitment to international justice. It is not a judgement mechanism for the Kosovo Liberation Army, or any other entity, but will deal solely with individuals and their actions.

The United States’ policy throughout the Balkans for the past twenty-five years has been that every victim deserves justice. Kosovo should be commended for the commitments shown over the past several years to doing its part to bring this justice to victims. Kosovo needs a National Strategy for Dealing with the Past. Until the past is dealt with, it will be difficult to move forward to Kosovo’s brighter future.

4.      How much did the delay in the forming of institutions affect the advancement of processes and the European integration?

A lot of time and attention was given to elections in 2017. I think it is a shame the Assembly did not do more. Even though it was formed several months ago, I think it took too long to get to work on Kosovo’s most pressing issues.

My hope is now that Kosovo is through the elections period and all government institutions and appointments are in place across the country, elected officials can get to work. Certainly we can see progress within the next three to four months on crucial issues like the Border Demarcation Agreement, passing the Law on Religious Freedom, moving an ambitious legislative agenda forward on a number of judicial accountability, criminal code, and rule of law reforms, and addressing Kosovo’s high unemployment rates.

5.      The issue of demarcation with Montenegro is a most current and hottest topic. The Government has approved the agreement and sent it to the Parliament. If the agreement does not pass – as it was said that they don’t have the numbers for ratification – what will Kosovo lose?

The EU has been very clear that visa liberalization is dependent on passing of the Border Demarcation Agreement. The most serious and immediate consequence of not passing it is continued isolation for Kosovo’s citizens and lack of visa-free travel to the European Union. Additionally, I think it does not send a good signal to Kosovo’s allies and partners that the government cannot finalize such a simple and straightforward international agreement, after over two years of debate about it. Responsible states have to make difficult decisions, find ways to compromise, and then implement them. Kosovo should ratify the existing agreement as soon as possible, and move on to other issues.

6.      Mr. Ambassador, according to you, is there any other solution for Kosovo to achieve visa liberalization from the EU if this agreement does not pass at the Parliament?

It is not up to me, as the U.S. Ambassador, to say what the EU will or will not do. But there are no signs that the requirements that Kosovo fight corruption and pass the BDA to be considered for visa liberalization would be reviewed or adjusted by the EU. My strong suggestion is that Kosovo spend time and effort on passing BDA and fighting corruption, not trying to change something that is not likely to change.

7.      In addition to demarcation, the fight against crime and corruption is one of the key conditions. How much do you think Kosovo institutions are working to meet this condition?

It’s important to note the positives. Judicial integration in the north began the process of extending access to justice to all Kosovo’s citizens, and the courts are beginning to reduce the significant backlog of cases in many parts of the country.

Accountability is important. Showing that government officials cannot participate in corruption with impunity is vital for Kosovo’s economic growth and international reputation.

Public procurement reform is another vital step in tackling corruption. Corruption in this area has far-reaching consequences, undermining economic investment, local service delivery, access to health care, and education. To make corruption harder, we would like to see the government fully implement e-procurement by the end of January 2018.

Kosovo’s government has an ambitious legislative agenda that will help fight corruption.

Reforms from the Ministry of Justice are moving forward, but they will need cross-party support in parliament. Passing the Law on Disciplinary Counsel, for instance, will be vital. This will be a critical step forward in strengthening checks, balances, and accountability in Kosovo’s justice system. Reforming the Criminal Code is another vital priority for the near future.

8.      In addition to demarcation another agreement that has been opposed is that on the Association of Serb Municipalities. Should this Association be formed?

The United States supports the Association of Serb Majority Municipalities (ASM). This is something the government Kosovo agreed to in the Ahtisaari Plan. Everyone has strong opinions on ASM and I understand that. But I hope that people will take the time to learn what the ASM is, and is not. It is not Republika Srpska. It is a way for Serb Majority communities to work together on healthcare and education, among other things. It is also a way for Kosovo institutions to extend services and sovereignty to all the country’s citizens and show people their future is in Kosovo.

In 2018, I hope to see a commitment to having an honest conversation in the country about forming the ASM. It is understandable that a lot of people are worried about it because there is not a lot of information out there about the next steps. I hope that is rectified by a good faith effort by representatives from every community in Kosovo.

9.      How do you evaluate the dialogue with Serbia and the implementation of agreements reached in Brussels? Should USA be part of this dialogue?

Kosovo’s upcoming tenth anniversary is a good time to reflect on some of the truly remarkable things achieved through the Dialogue. Would a lot of people have predicted that Kosovo Police would have full jurisdiction throughout Kosovo? That customs money from the northern border would be funneled from the border back into Kosovo? Let’s not lose sight of the achievements of the Dialogue, and I am just naming a couple here.

In 2018, I want to see both parties back at the table, ready to negotiate. The success of judicial integration’s launch in October provides momentum. It is easy to return to your country and accuse the other side of not doing their part. It is more difficult to transparently explain to citizens why Dialogue agreements are important, how the government plans to implement them, and then to actually do them.

The United States is working with the EU team of High Representative Mogherini to determine how we can best contribute to the success of the dialogue that the EU is facilitating. We will continue to do so.

10.  Ambassador Delawie, challenges in the Western Balkans are numerous, and one of them is Russian influence. According to a report published recently by the Kosovo Center for Security Studies, there is Russian influence in Kosovo as well. How much are you concerned about such influence and about the role of Russia?

As Deputy Assistant Secretary for Europe Hoyt Yee said in his recent visit to the region, the United States has ties with Russia on areas of cooperation. However, when our interests are not aligned, the United States will stand up for our interests, our values, our principles and those of our allies. A concerning issue is “fake news” or other methods of manipulating information so citizens cannot trust what they read. That is something being dealt with all over the world, not just in Kosovo. There is no easy answer, but I encourage all of us to be careful readers, to ask about the motivation behind the things that we read, and if we have questions, to look for reputable news sources, rather than easy clicks on the Internet.

To end, I want to congratulate the people of Kosovo on their extraordinary achievements over the past ten years. There is a long road ahead, but I am convinced that Kosovo’s people have the commitment and tenacity to succeed in all of their European ambitions.