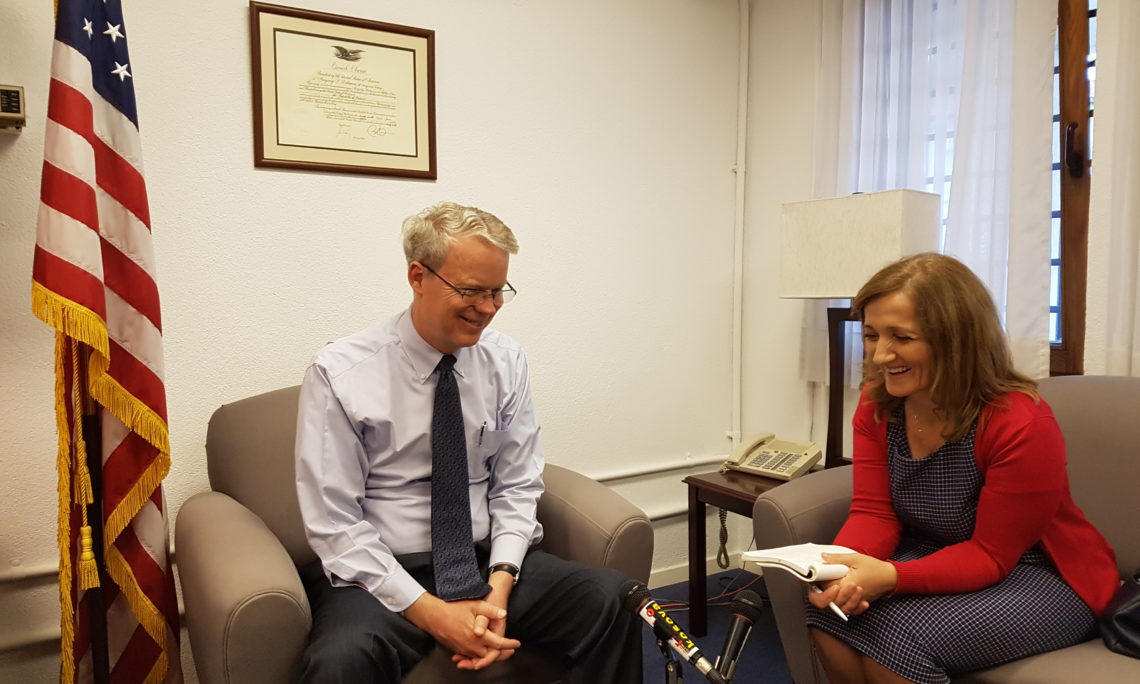 Radio Kosova: Mr. Ambassador, thank you very much for the interview and for the chance to speak with us. Happy 241st Anniversary of the Declaration of Independence. How do you celebrate the marking of this occasion this year?

Ambassador Delawie: Thank you very much, it is great to have you here and great to be with you today. As you mentioned, July 4 has come to be recognized as the anniversary of the signing of our Declaration of Independence, which was I guess the first “Brexit” and the beginning of the founding of our country, the United States of America. Our Constitution that we operate under today followed eleven years later.

Radio Kosova: Does the way the 4th of July is celebrated in the United States differ from year to year depending on the government? Not just how people or officials celebrate it, but also the diplomats.

Ambassador Delawie: I think the 4th of July Independence Day is really a people-driven celebration. It doesn’t seem to change a whole lot in the United States from year to year. Overseas, as an American diplomat assigned abroad, we traditionally have an Independence Day party where we invite officials, cultural figures, lots of people from Kosovo that we have been working with through the course of the year. It is our national day celebration. We did our party a couple of days ago, it was different from the way that we have done it in the past but that is just because we are trying to change things up a little and make it a little different each year.

Radio Kosova: Mr. Ambassador, do the children learn in school about U.S. history, about the Constitution, about the way that 241 years ago this day came about? Do people also speak about it in their families?

Ambassador Delawie: Yes, yes they do. Certainly my children did in their public school experience in the United States. In the United States, we feel that it is very important to learn our own history and of course, we learn world history as well. But children are taught at various times over the course of their school career in primary and secondary school about the events of the American Revolution, the separation from Great Britain, and the development of the U.S. Government from 1776 to the present.

Radio Kosova: Can the U.S. Constitution serve as a model for the rest of the world? I have been over there and I know that United States is such an open country, there are so many foreigners for instance in New York. I happened to hear so many other languages and not just English. So can the U.S. Constitution be a model for other countries as well?

Ambassador Delawie: I certainly think that the U.S. Constitution has been a model for other countries over the years. The United States is of course the oldest continuously existent democracy in the world. There are today many countries that have democratic systems and most of the systems are slightly different from the United States, there are parliaments instead of our Congress system. But I think the main themes of the U.S. Constitution do live in the rest of the democratic countries of the world and I of course think they are very positive.

Radio Kosova: Just to conclude this interview Mr. Ambassador: what are the challenges that you are having from this point on, not just internal challenges within the United States but also with other countries?

Ambassador Delawie: I think it is important to look at the message I gave at the 4th of July celebration on Friday, June 30, which is available on the Embassy website. I talked about the challenges that Kosovo is facing, and that is of course most in my mind because my job here is to work on U.S.-Kosovo relations. I get the sense that many people here are feeling stuck and not making too much progress. Certainly in the United States we have had times like that as well. There have been times of gridlock. And these times have been overcome when leaders came together for the good of the nation, not themselves, and found solutions and compromises on important issues.

I think, as I mentioned on Friday night, we are at a turning point. Rather, Kosovo is at a turning point and the people of Kosovo want progress and they don’t want more stalemate. The U.S. of course wants Kosovo to continue to make progress, we continue to support a sovereign, democratic, multi-ethnic Kosovo at peace with its neighbors and fully integrated into the global community. We look forward to working with the next generation of Kosovo’s leaders who share those goals.

Radio Kosova: Thank you very much Mr. Ambassador for the interview.