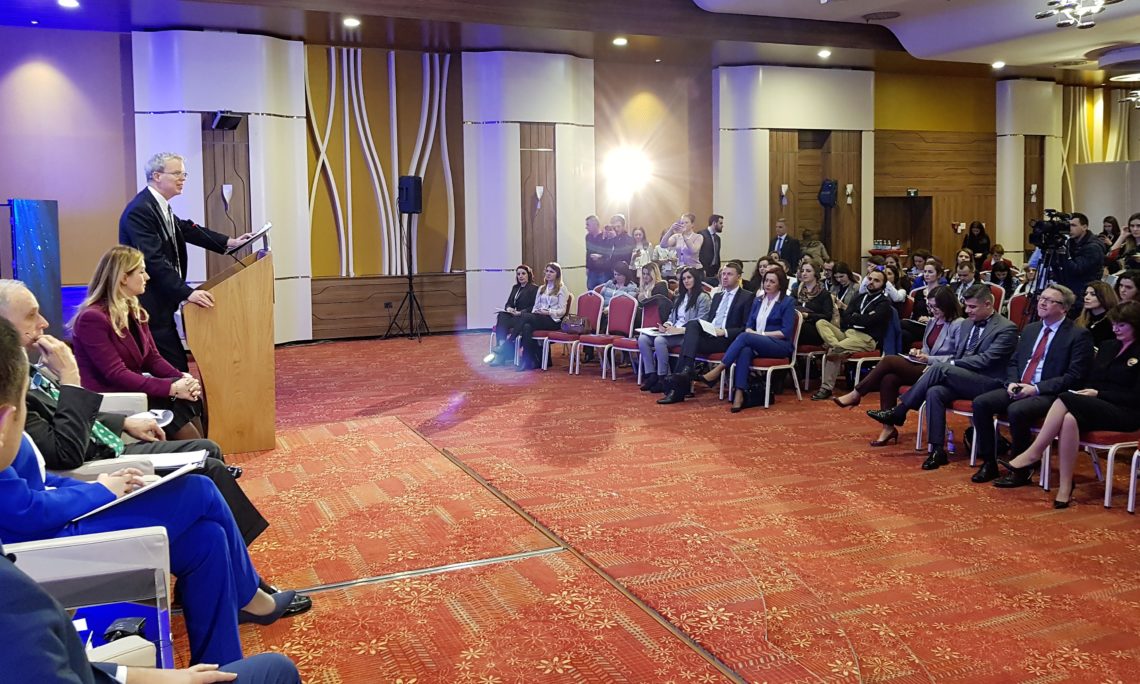 Ambassador Delawie Remarks for Week of Women 2018: Corruption as a Threat to Democracy, March 20, 2018

Welcome everyone, it’s great to be back here at the annual Week of Women.  And I think this year’s theme really captures the defining challenges facing Kosovo: the struggle to build an equitable, inclusive society and the fight against corruption.

I’ve said many times that building good governance and anti-corruption are my biggest priorities here, and that’s because progress on these issues is what makes everything else in Kosovo possible.

Every day I spend here I have the chance to meet with women  — farmers, entrepreneurs, judges, educators, politicians, and leaders in civil society, many of whom are also wives and mothers, and caregivers at home — who are giving their all to build their country’s democracy and to create a better society.  But as hard as women work, and as much as they are able to achieve, they need to know that Kosovo’s leaders are working just as hard to achieve the same goals, and with more commitment than they are right now, to ensure equal recognition and support, and a real chance to succeed for every citizen.

I have to say, I think it is embarrassing for Kosovo that there are only two women ministers in the current government (I’m glad to see one of them here)- and no women mayors.  To complete Kosovo’s democracy we all – men and women – need to work harder on this issue for Kosovo’s future.

Democracies may be built upon constitutions, and a body of laws, and political norms, but they thrive on the faith of their citizens.  Faith in the integrity of a system in which citizens and public servants are beholden to each other, faith that the road to success and prosperity means abiding by the rules, not subverting them, and faith that every voice will be heard. But corruption is a cancer that invades and colonizes healthy institutions.  It erodes civic resolve, it breeds cynicism and contempt, and it weakens the social fabric of society by making people doubt that it’s worth the fight.

You have to fight – that’s the only way.  And one of the best weapons we have against corruption is an urgent, relentless commitment to accountability.  That means conducting judicial performance evaluations, the prompt removal of corrupt officials, taking seriously National Audit Office reports, and cleaning up public procurements.  It also means ensuring responsible allocation of resources, including gender-based budgeting that enables government to promote equality through fiscal policy.

And of course, it means creating space for new voices and ideas, and a government that represents all the people, not just a powerful few.  This must include more women leaders in every community, in every municipality, in every level of government.  Women may not be more inherently immune to temptation, but their presence often helps shake up the entrenched systems of power and patronage in which corruption survives.  Representation and role models matter, and as former President of Chile, Michelle Bachelet once said: “a better democracy is a democracy where women not only have the right to vote and to elect, but to be elected.”

These are just a few of the things that can be done.  But of course we know that no simple list can affect the kind of sweeping reforms needed at every level of government in Kosovo to root out corrupt practices.  We’ve been proud to partner with you on these issues, and we’ll stay committed.  But the real change has to come from within.  Every woman and man in this room has the power to change the status quo.  You must participate, you must take action, raise your voices to demand better, and refuse to take shortcuts yourselves.  You need to remind your leaders that you elected them to serve the public interest, not their own.

Kosovo is a truly special place, an inspiring place, but its success does not come easy.  You have to fight for it.  Like any democracy it’s a work in progress –it requires the best you have to give of yourself.  Shirley Chisolm, the first African American women elected to the U.S. Congress said: “If they don’t give you a seat at the table, bring a folding chair.”  Well, every woman deserves a place in Kosovo’s democracy, and now, you have to sharpen your elbows and pull your chair up to the table whether you are invited or not.

I know our theme today is corruption, but before I finish, I want to tell you briefly about Arjeta Gashi, a woman I met a couple weeks ago during a TV show.  Arjeta lost out in her divorce, but she wasn’t defeated.  Far from it.  She learned all about the laws on property rights, she learned about the obstacles women in Kosovo face just making real the rights that the law says they already have.  She went out and founded an organization to help other women exercise their own property rights.  I was so inspired by her, by her tenacity and resolve, even in the darkest of times. It is people like Arjeta who give me faith in Kosovo’s future.

That kind of activism, that’s how you turn the tide.  That’s the challenge facing all of you, and as you stand up, we’ll be standing by your side.