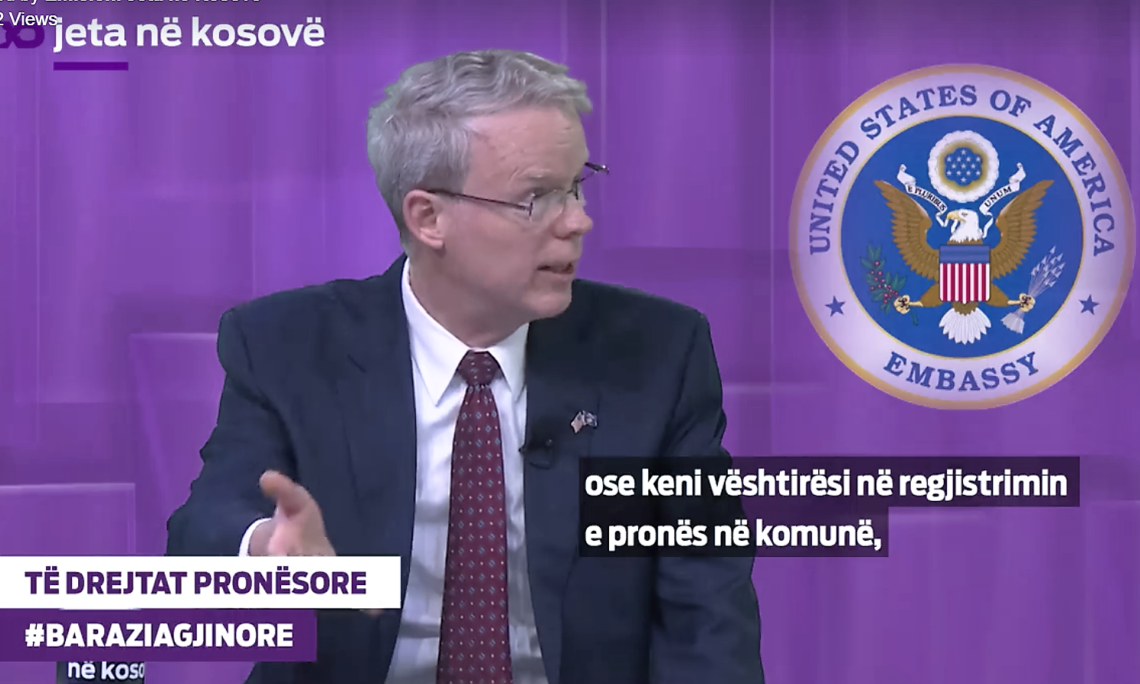 Jeta Xharra: Mr. Delawie, today we are talking about property and inheritance rights. I find it difficult that my first question is addressed to a foreigner. Did we need America to come and help us fix this issue? We leaned on the United States when the bombing campaign happened, we lean on America for demarcation, and now we have to lean on America regarding inheritance issues, too. Why did the United States decide to support this issue of women’s property rights?

Ambassador Delawie: Several reasons. First of all, we support Kosovo and we know that Kosovo only really succeeds when everyone in Kosovo participates in the economy and the society. I often say that you are not going to win too many football games if half of your players are sitting on the bench. That is kind of the situation we are trying to avoid for women in Kosovo.

Jeta Xharra: You’ve invested a lot of money in the courts. The biggest donor in Kosova. What would you say today, after 19 years of investment, is the result of that investment? Do you see it in real life?

Ambassador Delawie: We see it in real life. In the whole rule of law sector, we commit about $8 million a year and this covers a variety of things. It covers the criminal procedure code that we are working on with the Ministry of Justice. It covers training of judges, prosecutors and police. It covers a lot of different issues. And yes, we do see some results. I often say I am not satisfied with the level of results but I think the trend is positive. Just last week, we helped the Ministry of Justice launch the sentencing guideline program so that different people that are convicted of the same crime, being tried by different judges, would face similar penalties. There are a lot of things that are going on that we have supported.

Jeta Xharra: Tell me. How have women who have a problem with inheritance benefitted from your programs? Have you seen that result in real life?

Ambassador Delawie: We have seen results, but the numbers are still kind of low. We spend about $2.5 million a year on this whole range of issues on inheritance, our property rights program, and we have seen the number of women who inherit has risen tenfold, but that is still only to 3%. A very low number, but it is better than 0.3%, which is what it was before.

We do a lot of public awareness campaigns about this. You have probably seen our billboards around town and our public service announcements on television. The understanding of women’s property rights has risen to 50%, we know from surveys. We are seeing real results. Is everything great? Not yet, but we are going to keep working on this issue.

Jeta Xharra: Which part of the institutions would you criticize? We have seen you- regarding very big national issues, you are not short of criticizing our institutions. Could you be honest with us and really point out today which institutions do not impress you on this or are just not delivering in this field?

Ambassador Delawie: On the property rights field? Actually, diplomats tend to criticize in private and praise in public. My goal is to make things better. On this set of issues, we have been extremely pleased with the way we have been working with the current government, with the former government.

Jeta Xharra: Mr. Ambassador, we have done this, what we just did with the Minister, asking whether he has registered his property under his wife’s name. We have asked all the candidates, 300 candidates for mayor. The mayors have said that they will do it. Even if they hadn’t done it, they will do it as soon as they become mayor and they will invite us to film it. To this date, it has been since January that they have been set up in office and nobody has invited us to film their registration. We will give them the benefit of time.

What sort of example do you think it sets, how would you comment? Why do men who take power need to lead by example?

Ambassador Delawie: I’ll leave that exact question to the psychologists, but I think it is incumbent on leaders, political leaders, whether they are mayors or ministers or whatever, to lead by example. To do the right thing. I think it is clear what the right thing is in this case- it is that husbands and wives who own property together should have it registered together. Everybody should set an example for all of their constituents. That not only is the right thing for them, but it demonstrates to all of their constituents, everybody that lives in their city for example, that they are willing to treat everyone equally.

Jeta Xharra: Mr. Delawie, do you have any suggestion for women who- the most deprived women are maybe those who suffer domestic violence and then they are on the street with no support from their home, family, parents, with children. And clearly no support from husbands. Waiting for 8 years on average, as the Minister said, to resolve something is an appalling situation to be in. How are your projects addressing those women?

Ambassador Delawie: First of all, on domestic violence. We have done a lot of work on domestic violence, including developing a benchbook for judges to have them understand these complicated questions better. Regarding dealing with the issues you mentioned. Part of our work with the judiciary has helped lower the number of days these cases are being processed, the inheritance cases are being processed, by more than half. Clearly there is a lot more work to be done. It still takes two years, which is down from four, but it is still too long to deal with some of these inheritance cases.

Jeta Xharra: It is clear that people who are in need will never feel supported enough. But, have you seen any way that you can stop incentives for institutions who take your capacity building grants and actually don’t build capacity? Do you have a way of punishing them for not delivering?

Ambassador Delawie: We work with people that work with us, and we work with people that deliver. Not every project is a success. Sometimes we reorient our resources to focus on the projects that have been successful. This particular project we have been very pleased with. Now, we are helping the policy. It is going to be years before it is going to be fully implemented. Everyone has been enthusiastic about this, in the last government, in the current government. We had a 140 people from government, civil society, Members of Parliament, working on this together. We helped develop the National Strategy to deal with the complicated issues we are talking about. We helped on these laws that the Minister of Justice mentioned, the three laws he talked about. We are raising awareness, which is something that Arijeta is really doing, it is extraordinarily important because if you are not even aware that you should ask for rights, then you are not going to get the rights. Those are the areas that we have been working on. In all areas, we work with people that provide success and sometimes, everything doesn’t work exactly right and we just say ok, we have had enough time on this, we are going to work on something else instead.

Ambassador Delawie: I want to make sure people understand. We have worked with the Ministry of Justice on these new laws we have been talking about, the three new laws. But women have rights today and they should demand the rights they already have under the law.

Jeta Xharra: So we don’t need the law to pass?

Jeta Xharra: Ambassador, have you heard of any experience of women that have tried, according to the current law, to register their property? Have you met these women?

Ambassador Delawie: Absolutely. One of my colleagues at USAID bought property on her own and went to the city registry office to try to register, which is her right. The official there tried to discourage her from doing it, saying “well, someday you’ll inherit property from your father so you don’t really have to have this property registered,” which she purchased with her own money, by the way. She is pretty tough, she knew what her rights were, and she got it done. But, officials should make it easy for people to do the right thing. They shouldn’t make it that you have to demand your rights. It is incumbent on all public officials, and I’m a public official of course in my government, to serve our citizens and do the things that make their lives easier and make sure that their rights are respected.

These laws are good. They will make it better, but right now, today, women have these rights to register, to inherit property, and they should demand those rights if people deny them. It is incumbent on all public officials to ensure that women can exercise the rights they already have.

Jeta Xharra: The Minster didn’t want to give us a figure, for 8 March 2019, because he knows we will fact check it. Will you give us figures of what your Embassy will do a year from now that we can see whether you have actually- what is your plan, for the next year, for inheritance in particular and can you give us a figure of improvement?

Ambassador Delawie: (laughter) No, but I can give you the figure that we are going to spend around $2.5 million in the next year because my crystal ball is kind of hazy right now. We are going to continue to work with government and civil society to implement the National Strategy; lobby for the passage of the laws that we have been talking about; and continue the public awareness campaign. I should have mentioned that BIRN was an important part of our public awareness campaign and thanks to the team here for helping spread the word over the last year.