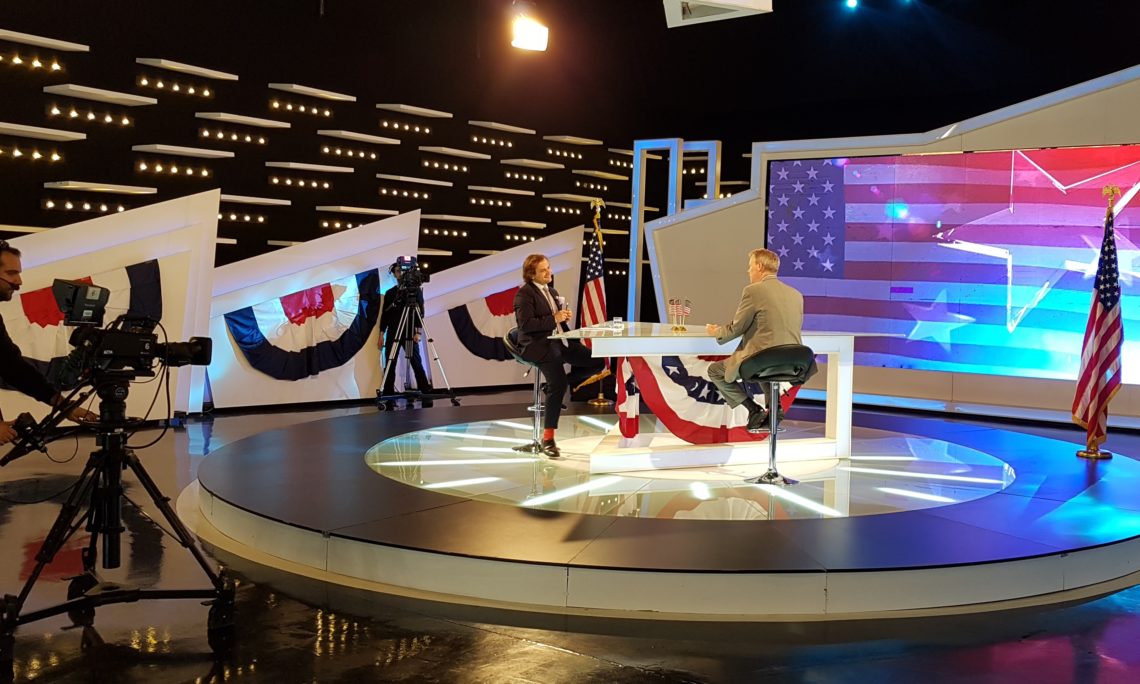 Ambassador Delawie: Thank you very much Kushtrim, it is absolutely great to be here.

Klan Kosova: Today Klan Kosova is your home too because in your country you have the Presidential Election, right?

Ambassador Delawie: We absolutely do, and we are very happy that we are able to work with your network to have this wonderful event here at Klan Kosova.

Klan Kosova: Shall we walk over to the other part just to see the studio, and the camera will be us. How would you describe the cooperation between the U.S. Embassy and Klan Kosova at this point?

Ambassador Delawie: It has been great. To be honest, it is a little odd, you have allowed us to take over your entire studio for the evening and I really appreciate it. The decorations are outstanding! I’m very happy to be here, and I’m very happy to work with you.

Klan Kosova: We are expecting some 600 people tonight to be a part of this very important event and to know of course who is going to be the next President, Hillary Clinton or Donald Trump.

Ambassador Delawie: Exactly. It is going to be an exciting evening.

Klan Kosova: This area is where we will have the interview. Can you tell us some details about the program tonight that will start at 9 pm?

Ambassador Delawie: At 9 o’clock this evening, it is going to start. We are going to have a mock election, where people will be able to vote for one of the candidates. We will announce the results later in the evening. We will have a selfie station so people can take pictures of themselves with cutouts of the candidates. We will have Facebook and Twitter posts, and some Facebook Live things going on over the evening. And we will have an interview. So we have a lot going on, as you said there will be about 600 guests, there will be dozens of people from my Embassy to help them feel at home, and I think we are going to have a great evening.

Klan Kosova: So even at Klan Kosova, in this organization, Kosovars are going to elect the new President of the United States? I am talking about the mock election.

Ambassador Delawie: Well in the mock election, absolutely! Everyone gets to participate. That is the great part about living in a free country, right?

Klan Kosova: Yes. That’s true. I have a tough question for you Ambassador- right or left?

Klan Kosova: Ambassador, how do you see the attention of Kosovars looking toward U.S. Presidential elections?

Ambassador Delawie: I think people are very interested here. People ask me about the elections wherever I go and that has been going on for a while now. I think that relates to the high level of interest in the American elections this particular year, and it is similar to what we see in other countries.

Klan Kosova: Is this a clear sign that Kosovars are so friendly with Americans I guess, Kosovars are very interested in who is going to be the next President of the United States?

Ambassador Delawie: I would certainly like to interpret it that way exactly. Of course, Kosovo and the United States have a terrific relationship dating back years and I’m very happy that people here are so interested.

Klan Kosova: Ambassador Delawie, how important is voting for an American citizen?

Ambassador Delawie: I think it is pretty important. I feel it is a right and responsibility of every American citizen to be heard, and elections are a way of doing that. This year there seems to be a lot more interest in the United States than there have been in some prior presidential election years, and I think you will probably see higher voting participation rates than we have seen in certain other presidential elections.

Klan Kosova: I see. Voting is a holy thing for democracy.

Ambassador Delawie: It seems small to us in the act- you make your mark or you push the button on the voting machine, but it is profoundly important for any democracy and I believe in a democracy, that every citizen should exercise his or her right to vote.

Klan Kosova: You have a nicer tie than me- I can see the American flag there?

Ambassador Delawie: I think you have a terrific tie! This particular tie, I wore it on purpose for Election Day. It has representations of many of the different flags that have flown over the United States over the last 230 years.

Klan Kosova: So it is it significant for today’s “day” as America is deciding who is going to be the next President. Speaking about the election, Ambassador, has the diplomatic staff here in Pristina voted yet?

Ambassador Delawie: I hope so! But we have pretty strict ethics rules in the federal government and I do not have the right to ask who my staff have voted for or whether they have even voted at all. Voting is an individual decision and I do not want to influence the votes of anyone that works for me. We certainly have made it possible for everyone to vote. We have 50 states that each have slightly different rules on absentee voting, but we have made sure that every American at the Embassy has the ability to cast his or her vote.

Klan Kosova: Have you voted yet?

Ambassador Delawie: I actually voted by mail. I live in Alexandria, Virginia, when I’m in the United States and I voted with an absentee ballot, we call it, about a month ago.

Klan Kosova: What can Kosovars learn from the way the United States organized the elections?

Ambassador Delawie: I think you said organization, and that is really key. We are a big country of course, we are 300 million people. There is something like 100,000 different polling stations in the United States for people to show up and cast their ballot and elections are run by the states and the cities mostly, as opposed to the federal government. When you’ve got 100,000 different locations across our large country, you have got to plan ahead. I think that goes for any democracy, even a much smaller democratic country like Kosovo. Planning ahead makes sure that all the arrangements are in place, that you don’t have too many show up at any particular polling place so you have to wait in line a long time. Organization is the key. Democracy, it is extremely important, and I hope we are setting a positive example for many other countries in the world, demonstrating that you can have a free election.

Klan Kosova: Especially in Kosovo maybe… and other countries?

Klan Kosova: Ambassador Delawie, have you been following the presidential campaign all the time. I guess you have been watching on TV.

Ambassador Delawie: Yes. I’m pretty sure a high percentage of Americans are following the election carefully. I’ve read an article in one of the American publications the other day asking “Are the Americans addicted to the election?” And I don’t know the answer to that. But, yes’ I’ve been following very closely I think.

Klan Kosova: I see that these elections are more interesting than the other one.

Ambassador Delawie: Now, lots of elections have been interesting over the years. In 2008, when Barack Obama was elected President of the United States, he was the first African American to be elected as President. There was a lot of interest in that election as well. This election there is clearly a lot of interest in. So, other election perhaps has been less interest in. It’s hard for me to judge.

Klan Kosova: Yeah. I know that from your position, of course. Has this campaign been battle of programs regarding economy, security, or maybe foreign policy, Ambassador?

Ambassador Delawie: My impression is that economy and security have been kind of major themes, less discussion on foreign policy issues. American media at least are focused on these things and some other issues. Sometimes it has been hard to see where the candidates are on various issues if you just followed the media. But, each campaign has a web site and they’ve all got lengthy policy papers, and you can kind of work out foreign policy, energy policy, whatever, and find out where the candidates stand on those. So, information is available to the voters.

Klan Kosova: Ambassador, how you would describe the harsh language on both sides used in this campaign.

Ambassador Delawie: Well, Americans can be passionate people and they can be very passionate about politics. But, this has happened in the past, too. One of our founding fathers, Thomas Jefferson, supposedly hired someone in 1800, during the election campaign against John Adams, to spread bad rumors about him. So, there has been a lot of rhetoric during this campaign but you would have seen that probably in the past American elections as well. The difference is now – of course – that we have Internet. In 1800, this information had to be passed person-to-person or via printing press.

Klan Kosova: You blame the Facebook or the social media about the harsh language, this harsh battle if I can say so?

Ambassador Delawie: You can’t blame the Internet. It is very important all of our lives. You cannot deny that it has made it easier for rhetoric to move further on the personal level.

Klan Kosova: Ambassador Delawie, how important is it for the world the next American President, for Europe or for the friends of the United States?

Ambassador Delawie: I think it’s important. I think, historically speaking, from a foreign policy standpoint, we’ve been on a pretty even keel. Certainly, related to the Western Balkans, and Kosovo in particular, whether the President has been Democrat or Republican – our policy has been pretty much the same. But, clearly, there is a lot of interest in this in every country in the world. The fortunate thing is that the campaign is over today, people are voting today and we should know the answer pretty soon.

Ambassador Delawie: You know my crystal ball is kind of hazy today, so I can’t really speculate about someone who hasn’t been elected yet is really… but I will say, I’ll repeat that you know that in the last twenty years or so American foreign policy regarding Kosovo has been remarkably consistent

Klan Kosova: Yeah, and you hope that it would continue in that way regarding Kosovo, right?

Ambassador Delawie: I am a big fan in Kosovo, I support our policy in Kosovo and our administration in Kosovo, and I hope it will continue like that.

Klan Kosova: Ambassador Delawie, who is your favorite candidate?

Ambassador Delawie: [laughs] Kushtrim… Listen, we have secret ballots in the United States and I have the right to keep my preference secret but even more importantly I have an obligation as a U.S. Government Federal Employee not to reveal my preference in any partisan political election including that for the President of the United States. It would be the same exact role for the member of the City Council in Alexandria where I live, so I’m not going to tell you, but…

Klan Kosova: A lot of people are watching us Mr. Ambassador.

Ambassador Delawie: Yep, well, and if they are Americans I hope they voted.

Klan Kosova: So that’s a nice question. I have an idea, I think it’s a good idea for the end of this discussion, and this interview, we would take a selfie with the both candidates in the other part and I will thank you for being here, in this part taking this interview Ambassador.

Ambassador Delawie: That will be great Kushtrim. I will be delighted.

Klan Kosova: Thank you very much.