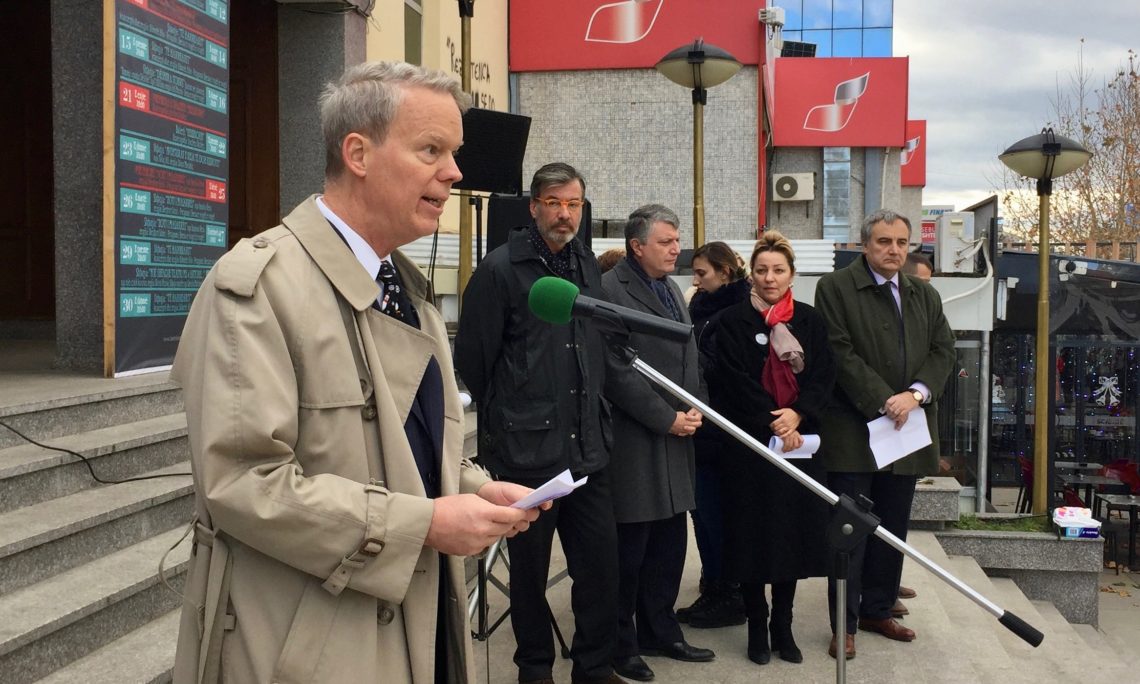 This week over the course of 35 events and countless debates and discussions, we took a stand together in the fight against corruption in Kosovo.

I’d like to offer a huge thank you to the NGO Coalition that worked so hard for weeks to make Anti-Corruption Week 2017 such a success. And I want to thank our international partners, the media, and above all the citizens of Kosovo, who helped to shine a spotlight on so many critical issues. As I said at the outset, the international community is here to help – but this fight truly belongs to you.

This week, in public hearings we saw government officials, Assembly members, and civil society actors in constructive debates about legislation that will mark major steps forward in the fight against corruption. We heard about the Justice Ministry’s revision process for the criminal code – including civil society and international community input – to eliminate dangerous loopholes. We also heard commitments that the work on reforms to laws increasing discipline in the judiciary will move forward very soon. When these are done, the Assembly needs to ratify the changes immediately.

Let’s make sure that cooperation like this – between government, legislative, and citizen actors – does not end today, but continues throughout the year and becomes a normal part of civic life.

I hope that this week’s events and conversations were, much more than talk- they were catalysts. In fact, we’re already moving ahead with several projects that will have an immediate impact on transparency and citizen participation, reducing opportunities for corruption in the future:

First, the Public Procurement Regulatory Commission signed an MOU with USAID reinvigorating public procurement reforms, including implementation of the e-procurement system. These reforms could be a game-changer in Kosovo but it will take the commitment of every municipality and every level of government to get it done. It’s essential that this be a priority of this government’s reform agenda.

USAID also launched the Municipal Competitiveness Index, which provides an in-depth look at Kosovo’s local-level business climate and local governance, and identifies areas for improvement to increase investment, create jobs, and foster transparency and competitiveness. It’s a great sign that many municipalities have been so eager for the Index to get underway.

And the work goes on. Later today I will join a TechCamp that is training participants from the media, government, and civil society in how to apply free and low-cost digital tools to increase transparency and prevent corruption. I look forward to meeting the 40 Kosovo citizens who are participating in this TechCamp, along with 20 other participants and trainers from across the Balkans, Europe and the United States.

This was a big week, and we can all take pride in our accomplishments, but we know the work doesn’t stop with closing statements and the fight against corruption isn’t a special occasion. As I’ve said before, corruption hides in the darkness, so shine a light on it. And most importantly, lead by example: refuse special favors and deals that value connections over competence. Merit matters, so prize it above all else. We are committed to continue to work with all who are serious about procurement reform, judicial reform and any anti-corruption effort that unleashes the potential of Kosovo and her citizens to achieve the bright and prosperous future you deserve.

Thank you and #Bashkendreqim! (Fixing it together)