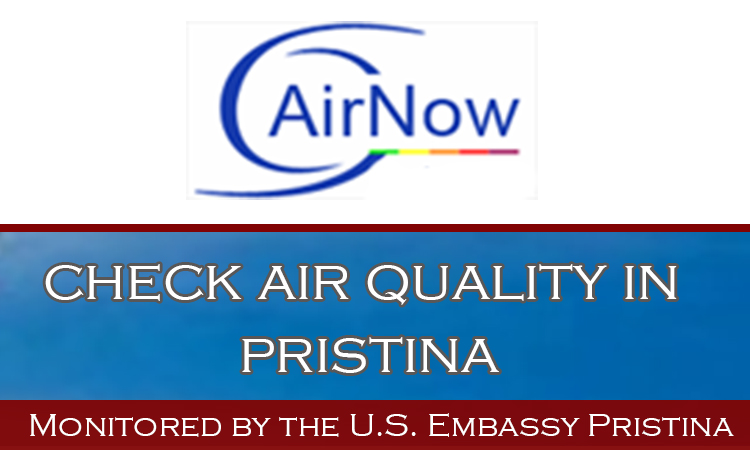 The U.S. Embassy in Pristina has installed an air quality monitor to measure pollution in Pristina’s air, the results of which will be available live to the public.

Air pollution is a major health and quality-of-life issue facing millions around the world.  In the United States, the Clean Air Act (first passed in 1970) was created to clean up air pollution and help protect the health of all Americans.  Recognizing that pollution is not a problem that stops at borders, the United States also monitors and provides some states with assistance to better understand such pollution.  One tool to do so is the Air Quality Index (AQI), which tells you how clean or polluted your outdoor air is, along with associated health effects that may be of concern.  The AQI translates air quality data into numbers and colors that help people understand when to take action to protect their health.  The U.S. Embassy in Pristina is now part of a program to monitor air quality;  the results are published unedited for public information and use.

The air quality monitor installed by the Embassy will measure particulate matter in Pristina’s air.  The air monitoring equipment is located at the Embassy;  readings for other parts of Pristina will vary.  The data will be updated hourly and will be available live beginning Wednesday, March 30, at the AIRnow website,https://airnow.gov/index.cfm?action=airnow.global_summary.  A badge linking to the site will also be added to the Embassy’s website, http://pristina.usembassy.gov/, in early April, and those interested will have the option to subscribe to an RSS feed that will deliver updates to their email address.

The Embassy’s monitors will measure particles found in the air, including dust, dirt, soot, smoke, and liquid droplets, at 2.5 microns (PM2.5) and less measured in micrograms/cubic meter.  Such particles can be the result of vehicle and power plant emissions, residential coal or wood burning, or direct events such as forest fires, and can remain suspended in the air for long periods of time.  Particles of this size, such as PM2.5 (1/30th the diameter of the average human hair diameter), pose the greatest health risk.  Scientific studies have linked long-term particle pollution, especially fine particles, with significant health problems such as heart and lung disease.

The Embassy’s monitors will collect data continuously, results will be averaged and updated hourly on the website and used to compute an Air Quality Index (AQI) value of from 0 to 500, which will be posted to the Airnow website.  The purpose of the AQI is to explain what local air quality means to the population’s health.  To make it easier to understand, the AQI is divided into six categories:

“Good” AQI is 0 to 50.  Air quality is considered satisfactory, and air pollution poses little or no risk.Each category corresponds to a different level of health concern.  The six levels of health concern and what they mean are:

We encourage everyone to make use of the data and work towards a cleaner, safer environment.