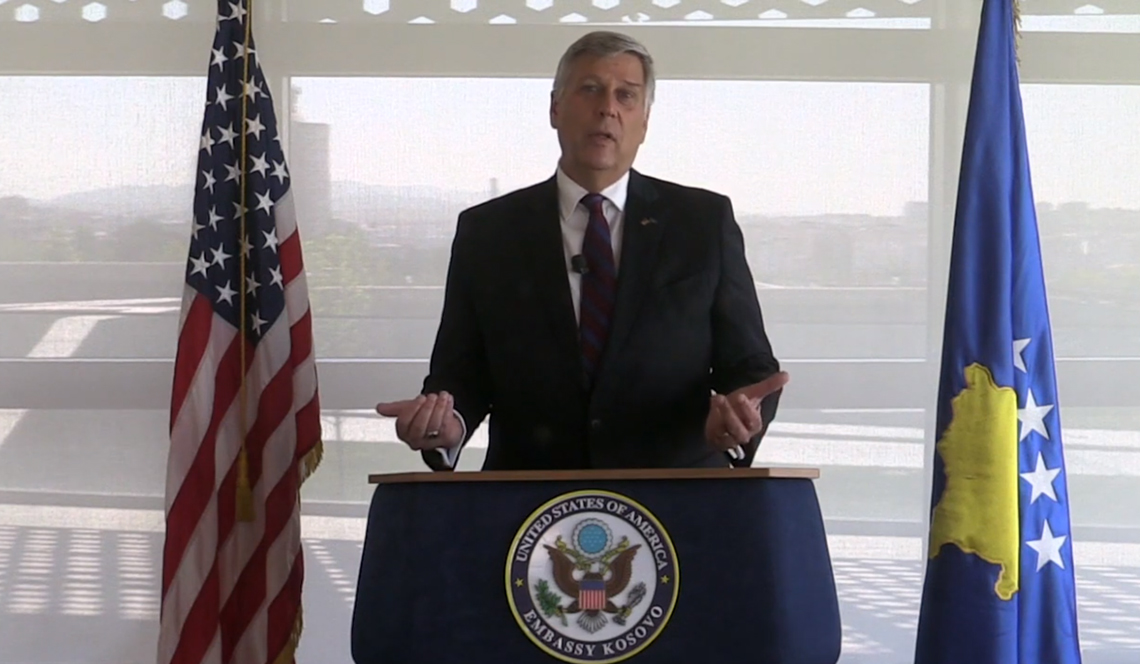 Hello. Thank you for joining us as we celebrate the 244th Independence Day of the United States of America.

In the year 1776, the United States was on a journey toward independence. Our founders did not only seek freedom from a foreign king. They sought to build a new type of society – a republic which recognized that life, liberty, and the pursuit of happiness were self-evident human rights.

More than two centuries on, America’s journey to realize that vision is unfinished. Americans have experienced times of joy and progress, but also pain and regression. In the 1860’s hundreds of thousands of Americans, white and black, died in a tragic civil war to bring freedom to millions more Americans who had been enslaved.

A century later, civil rights activists like Martin Luther King Jr. gave their lives in the struggle to achieve a society where, in King’s words, children would “one day live in a nation where they [would] not be judged by the color of their skin, but by the content of their character.”

And the struggle for equal justice and equal opportunity in America has not been a matter of race alone. Leaders like Susan B. Anthony, the 19th Century champion of voting rights for women, fought for the proposition that America’s assertion that “all men are created equal” must apply to women as well. Generations of Americans – some famous, some anonymous – have fought to extend the concept of equality to include people of all races, all ethnicities, religions, genders, and sexual identities.

In recent weeks, we have seen that America’s long journey continues, as Americans again struggle against racism and injustice.

In America as in any country, democracy is not a spectator sport. Democracy requires the active commitment and perseverance of the citizens. It also requires honesty and humility to address our weaknesses and learn from our failures. This is a time of turmoil and anxiety in America – but also a time of hope. Hope that irreversible, positive change can come with an engaged citizenry. And the same can be said of Kosovo.

The people of the United States and Kosovo share many values and attributes. Our people are tough and smart, creative and compassionate, resourceful and resilient. As friends and partners, we have responded to each other when in need. We stood together to make Kosovo independent, during the aftermath of the September 11th attacks, in the fight against global terrorism.

And we stand together now in the face of a global pandemic.

The recent challenges have shown the creativity and resilience of Kosovo’s people. As institutions and businesses were forced to shut down to stop the spread of the virus, government, business, and civil society alike reacted to assist those in need. The United States responded with financial and technical assistance. There is much more to be done, including by ordinary citizens, to bring the pandemic under control. But I have faith that with perseverance, hard work and cooperation across borders, we will prevail over the virus as we have over other enemies.

On this American Independence Day, let us all pledge again our best efforts to build societies – to build a common future – reflecting our founders’ dreams, and fulfilling our obligations to generations yet to come.

The people of Kosova will always be grateful for the role of the United States in cultivating the ideals stemming from the Declaration of Independence of July 4, 1776. The experience of the United States provides a great guide for the dreams, freedoms, democracy and prosperity of all Kosovar citizens.

Liberty is also a history of resistance. And as the people of Kosova have moved from their resistance to tyranny into independence and freedom, we continue to look for justice and work; health, education and science; art and culture.

During this year, the world closed the COVID-19 pandemic with a deadly virus threatening humanity. Our people have also been facing this difficult challenge with limited resources. But friends are together on difficult days. It was the same this time when our American friends extended a helping hand to our people by supporting the health care system of Kosova. We thank you for this essential support.

Since there is not any cure or a vaccine, preventing the disease remains the only weapon in our hands. Dear citizens, Please follow the tips for prevention by keeping your physical distance everywhere and at all times, wearing masks and applying hand hygiene. Only together, we can face this challenge!

Our path to the future is shared and we are committed to fulfilling the ideals that emerge from the July 4 Declaration. Let’s follow JFK quote “Don’t ask what your country can do for You. Ask what You can do for Your country!”

Today, on July 4, every Kosovar is an American!
America, today, in Your flag you have one more star – that of Kosova!